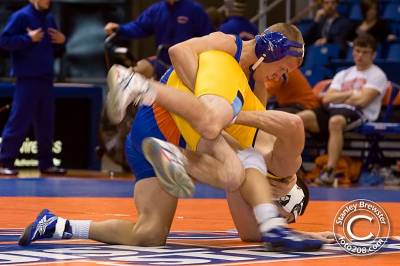 New site member Ryan, who goes by the cryptic screenname "boise", brought to our attention a good point—we haven't talked much about Bronco wrestling—and hey, they're pretty good. So below, seize your opportunity to talk a little Bronco wrestling (I'm looking at you, boise, whoever you are...oh yeah, Ryan)—they're the one winter sport that hasn't repeatedly crushed our hopes and dreams.

Full disclosure: I wrestled for 8 years and sorta know what I'm talking about when it comes to the sport. However, I haven't been to any Bronco duals this season, so I can't speak to the strength of the team as well as some of you might be able to. So, this post is for you, matheads...help us inform the rest of Bronco Nation how awesome the Bronco wrestling team is.

The Broncos are pretty solid from top to bottom, that's why they're near the top of the InterMat rankings (behind only Penn State and the Nard-dog's alma mater, Cornell), but four wrestlers on the Bronco squad really stand out—and give the squad possibly their best shot at a national title when the NCAA tournament begins in mid-March.

Local product Smith (Centennial High School) has enjoyed a stellar career at Boise State, but a national title has still eluded him. He came as close as one can get last season, winning every match of the season except the one that really counted in the finals of the national championships. Smith has been on a mission this year to finish what he started in 2009-10...he's again undefeated and ranked #1 in the country.

Hall is another Idaho product (Bonners Ferry), and a real threat to bring home an individual national title this year. Hall won a Pac-10 title last season as a junior and finished 3rd at the NCAAs, defeating this year's #1 ranked wrestler, Steve Fittery in the consolation bracket of the tourney. Hall has been rock-solid this season and most recently registered a 26-8 win by technical fall in last weekend's route of Pac-10 rival Oregon State.

Chamberlain finished 3rd at the Pac-10 tournament in 2010, but after entering the tournament as the #1 seed, this was a disappointing showing for the sophomore. He started the 2010 NCAA tournament well also, but lost consecutive matches and got unceremoniously bounced from competition. Chamberlain's junior year is off to a very promising start, though and he's currently ranked #3 in the nation by InterMat.

Hochstrasser had a rather disappointing 2010, but not due to lack of success on the mat, but rather lack of success staying healthy. Hochstrasser was 8-0 on the year in duals and ranked as high as #2 in the country despite not wrestling after the national duals in January. His sophomore season saw him finish 4th at the national championships. Hochstrasser's senior year is showing the same promise of his junior season as he's again climbed to #2 in InterMat's rankings. He'll likely be highly seeded at the NCAAs and if both wrestlers can avoid a letdown, will likely take on Oklahoma State sophomore Jordan Olivier for the title.

The Broncos have been thoroughly dominating their Pac-10 opponents this season, outscoring their last 3 dual opponents, #24 Cal Poly, Stanford, and #20 Oregon State 95-15. You simply can't be that dominant by relying only on your top four guys, and the Broncos have had big upsets, and big production out of the rest of their line-up. Senior Alan Bartelli is ranked 15th nationally at the bottom of the lineup in the 125 lb. class, Levi Jones is ranked 18th in the 141 lb. class and scored a brilliant 9-2 upset over #11 ranked Mike Mangrum of Oregon State just yesterday. Freshman Jake Swartz is showing a very promising future in the 174 lb. class and is currently ranked 11th nationally. Furthermore, Matt Casperson (197) is wrestling very well and notched a big win over the #18 wrestler in Corvallis on Sunday and heavyweight frosh J.T. Felix has already notched some big wins on the year.

The Broncos have lost just two duals on the year—both at the Cliff Keen national duals tourney—but have been giving their Pac-10 opposition the hot knife/butter treatment. They'll be back in action Wednesday night against Cal-State Bakersfield and will have a big matchup with #4 Oklahoma State looming on February 11th before their off to the Pac-10 tourney on the 27th. If you like wrestling and women in unitards, be sure to check out the Beauty and the Beast event this Friday as well...where else can you see the grace and beauty of women's gymnastics and the technicality and brutality of men's collegiate wrestling under one roof?

We don't do this often, so if you want to talk Granby rolls, Fireman's carries, and Saturday Night rides, have at it in the comments section. I'll be at Beauty and the Beast this Friday—mainly so I can tear up my hypocrite card