Death of recruit lends perspective to football and life

Share All sharing options for: Death of recruit lends perspective to football and life

Recruiting season runs year 'round and is punctuated with commitments, decommitments, and last minute pickups. But with LOI day rapidly approaching, we'd be remiss not to mention one recruit that won't be signing with the Broncos on February 2nd. One we wished with all our hearts would have had the chance to.

So close. That's all many fans of Moreno Valley Rancho Verde said following their 17-7 championship game defeat at the hands of Colton in mid-December. The Mustangs had entered the title game as the top seed and with an unblemished 13-0 record. Things didn't work out the way they'd planned. Of course, nothing about the 2010 season went the way things were planned for the Mustangs...and that's what their appearance in the title game a triumph unto itself.

On July 18th, roughly a month and a half before the Mustangs were to begin the season, their star defensive player Emil Smith was killed in an automobile accident with his brother Dimitri Garcia. Smith's death sent shockwaves through the community but became a rallying cry for the Mustangs. The squad, still reeling from the loss of one of their leaders when their season began against West Valley on September 3rd, had to clear their heads and fight through the grief...because they knew, to a man,  that's what Smith would've wanted. So no one hung their head when the Mustangs left the field less than 5 months later having lost the championship game. They'd shown more resolve than anyone could've imagined...and Emil woud've been proud.

So close. That's what many said when just 3 weeks after committing to play for the Broncos, Emil Smith passed away. The Broncos had lost a promising prospect at the nickel position, but Smith's parents had lost two sons. Football never seemed so unimportant. But it was still important...important to Smith's parents who hung his framed Boise State acceptance letter on the mantle. Important to the teammates he left behind that vowed to work every bit as hard as Emil would have to get to the CIF championship. Important to a community whose pain was assuaged by watching the team rally to an undefeated season without their leader. Football was important to heal Moreno Valley...and it was evident that it was still important to Smith's parents when they visited Boise in October to take in the site of one of their sons great triumphs....a Division 1 scholarship. When Smith was honored with a moment of silence before Boise State's win over Hawaii, his father, Darren Smith, knelt down and kissed the blue turf. It was an emotional moment that no one will forget...and one that sealed Emil Smith's memory into the collective consciousness of Bronco fans that never even got to see him don the blue and orange. And so the Broncos. like the Mustangs, finished their 2010 football season with just one (painful) loss. These losses paled in comparison to losing a friend, a son, and a teammate. Emil, still, would've been proud. 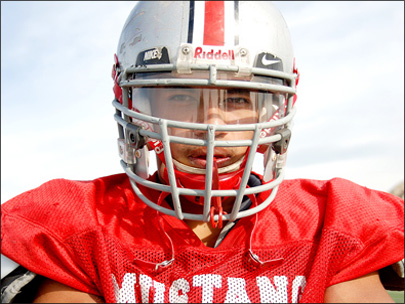