Share All sharing options for: Game balls for Boise State versus Virginia Tech

To keep the afterglow glowing from Boise State's win on Monday night, let's hand out some game balls. For everyone!

OBNUG's weekly game ball tradition resumes in celebratory fashion with an epic award show after the jump. I hand out awards for players of the game, plays of the game, and pretty much anything else that strikes my fancy. And when I'm done, the game ball circuit continues with your awards and reaction in the comments. So without further adieu, let the game ball giving begin. 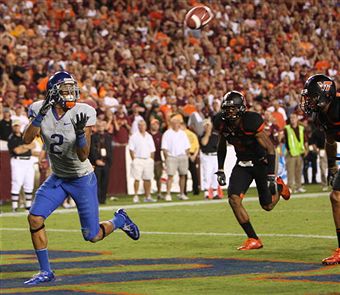 In one of the closest votes in OBNUG game ball history, Pettis squeaked by Kellen Moore with a 10-vote margin. It was like Decision 2000 up in here last night.

Pettis's POG was well deserved, obviously. Two touchdowns, one punt block, zero broken legs on two-point conversions - how much better can it get? For Bronco fans who had not seen Pettis play at 100 percent since very early in last year's Nevada game, his performance Monday night was revelatory. Can you imagine how much better the Bronco offense would have looked in last year's Fiesta Bowl with Pettis at 100 percent?

Player of the game, non-Bronco edition

One of my keys to the game for the Broncos was holding Tyrod Taylor under 200 yards of total offense. Guess Taylor got wind of that. He totally stuck it to me.

With the Broncos loading up against the run, Taylor had to perform like a champ for the Hokies to stay in the game. And beginning in the second quarter, he did. The final numbers aren't spectacular, but you could not have watched that game without having a healthy appreciation and a haunting fear of Taylor's football skills. Good luck with him, ACC.

If I were to give a game ball to a unit (and let's be honest, these game balls aren't real, so I can do whatever I want), it would go to the Boise State run defense in a landslide. Virginia Tech rushed for San Jose State-like numbers: 44 carries, 128 yards, a 2.9 average. Yonus Davis called and he wants his career rushing totals back.

To highlight BSU's domination even further, let's take out Taylor's rushing totals, most of which came on pass play scrambles. I have put the numbers in some strange text formatting that I'm not sure how to use but definitely stands out:

These are some of the people who deserve credit: The Boise State defensive line who stuffed running lanes and ate blockers all night long; I can't remember a VT fullback getting more than one yard beyond the line of scrimmage before having to block one or two guys. The Boise State linebackers who filled the running lanes faster than Ryan Williams could even find them. Jeron Johnson who was up in run support almost instantaneously on every play.

Game balls for everyone! (Well, not you, Ryan Williams. You were sucky.)

D.J. Harper run of the game

"Is Kellen Moore a big game quarterback?" by Kevan Lee, foreword by everyone at CFN.com

This was not one of Kellen Moore's most prolific games, at least not until the final two minutes. As such, I was starting to question why Moore doesn't take over games like these - against TCU in the Poinsettia, against Oregon at home last season, against TCU in last year's Fiesta. Don't get me wrong, he plays well. He's just not as dominant as Bronco fans have come to expect.

Well, thankfully that last drive happened and he was as dominant as ever, pretty much having his way with the VT defense. I take it all back! I un-think everything I had thought. This is what I meant to write:

He faced the best pass rush he's ever seen, and was forced to make quicker decisions than he ever has. But he never made the one mistake that killed Boise and finished their night. He avoided losing yards on sacks, and didn't throw a pick. It was only because of Moore's play the rest of the night which allowed for the great final drive.

Couldn't have said it better myself, because I didn't.

Best receiving touchdown by a blocking tight end probably ever

Boise State's defensive strategy against Taylor was to pressure him with blitzes, which is fine so long as you a) tackle him when you blitz or b) keep containment. That didn't really happen.

There were a lot of different ways that the Broncos could have defended, and picking your poison against VT was especially dangerous on Monday night with the way Taylor was playing. But at some point, I expected Kwiatkowski and company to realize that letting Taylor break contain and do whatever he wants just wasn't a good strategy.

Then again, Boise State won, so what do I know. 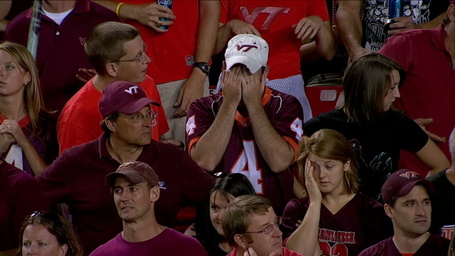 Venable was named a team captain, he won the coin toss, and his work here was done. At least that's how it seemed, since the Boise State star did not even crack the stat book other than being listed as a starter. Oh well. More pent-up aggression to use on Ryan Colburn, that's all.

What do you think about this week's game balls? Did you vote Pettis over Moore? Think my Kellen Moore story should never be written under any circumstances? Share your thoughts in the comments and feel free to hand out game balls of your own.