Share All sharing options for: Kellen Moore to Austin Pettis and 9 other game-changing moments from Boise State - Virginia Tech

Still in the throes of a win hangover from last night's epic Bronco game, I can hardly believe it really happened, much less how it happened. Before we get too bogged down in rankings and title talk, I need to spend a few more minutes re-living the glorious game that was by recapping 10 game-changing moments from the opener.

What a perfect pass to end a surprisingly perfect drive. Boise State hadn't moved the ball that well since the post-penalty part of its Tommy Gallarda TD drive in the first quarter. A pass here, a first down there, and before you knew it, Kellen Moore was floating a rainbow pass over a dumbstruck safety and into the waiting arms of Austin Pettis at the back of the end zone. It was a great route by Pettis, who not only shook free of the corner in a flash but also confounded the safety who was helping over the top. It was a Heisman-caliber throw by Moore, who tossed it well before it was obvious to do so and expertly enough that it looked like child's play.

After the jump, get the other nine game-changers from Monday night's win, and then vote on your favorite moment and share your thoughts on each. 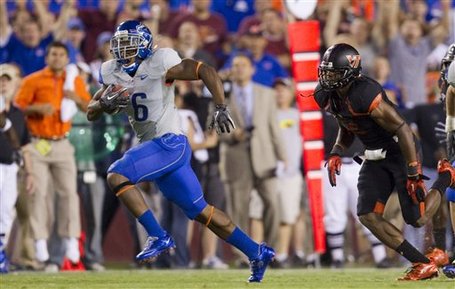 "He's back" doesn't even begin describe how I felt about that run. He ran that 3rd and short with authority and with power, and he added blazing speed to boot once he hit the open field.

But what about the timing of that run? Boise State had just fallen behind 21-20 and was reeling from a Hokie team that was slowly but surely taking over the game. If Harper goes down with the first tackle, BSU doesn't pick up the 1st down and I have a much harder time rolling out of bed in the morning. Instead, that run alone gave the Broncos a much-needed boost and provided pretty much the only offense between the first quarter and the last drive.

It was what I refer to as highly skeptical blocking. Avery hit a Tech special teamer flush in either the shoulder or the back, depending on what team you were rooting for. The refs were apparently rooting for Boise State because they waived the flag off as a legal block.

Which was really convenient. Boise State would have had horrible field position had that call stood. Instead, Boise State started at the 44-yard-line and needed only 56 yards for the go-ahead score.

I assume there will be a good deal of weeping and gnashing of teeth by Virginia Tech fans for some of the playcalling at the end of last night's game. May I suggest they begin with this play?

With two minutes left and Boise State out of timeouts, Taylor and the Hokies faced a 3rd and 8 from their 33-yard-line. Play it safe with a run to chew some clock? Take some sure yards with a short pass or screen? Roll Tyrod Taylor out of the pocket and let him make a play with his feet like he had been doing all day?

What are we considering the left hash at this point? Anything to the left of the exact middle of the field? Brotzman's 30-yard miss was a couple yards within the left hash, and instead of his traditional pull job to the right, Brotzman pushed the kick wide left. Shame, too. Boise State capped an 11-play drive with no points at a time when they really could have used some points. Worse yet, the drive stalled after a 2nd and 3 from the Hokie 13. Tech took the ball back down the field and added a field goal of their own for a 4-point lead.

Note: To be fair, how cool was it to see Brotzman nail a 47-yarder from the left hash in the first half?

Ebo Makinde called for running into the kicker

I think this play can best be summed up by a simple "Why?" which is exactly what I said to my TV when it happened. It's a 51-yard field goal from a kicker who was more Bill Grammatica than David Akers. Let him be, Ebo Makinde.

Of course, that play allowed VT to re-think its 4th down strategy, leading to this ...

I believe that the all-out blitz on 4th and 6 was the right call by defensive coordinator Pete Kwiatkowski. It was just a bad play by Brandyn Thompson. Credit Tyrod Taylor for a good throw and Boykin for a good play, but you also have to blame Thompson for tentative coverage and a really bad tackle. Instead of Boise State stopping a Hokie drive with no points, Virginia Tech gets an immediate answer to D.J. Harper's touchdown run and regains the lead.

This play was all sorts of disappointing. First, Martin failed to pick up a 1st down on a 3rd and 2. Second, Martin fumbles trying to pick up the 1st down. Third, Thomas Byrd does a bellyflop on the ball in the open field, letting it squirt out so that a VT defender can recover. Fourth, the Hokies finish off the drive with a touchdown right before half to cut the Bronco lead to 20-14.

Pettis's punt block was the Billy Winn safety of the Broncos' season opener. Not only was it a great play by Pettis, but it also led to seven points (courtesy of Pettis) and a 10-0 Boise State lead with barely five minutes into the game.

What game-changing moment do you remember most from Boise State's win over Virginia Tech? Which one was the most important? Which ones did I forget? Share your thoughts in the comments, and vote in the poll.