Everything you need to know for Boise State vs. Virginia Tech [Game Preview]

Share All sharing options for: Everything you need to know for Boise State vs. Virginia Tech [Game Preview]

Want to know what will be most important for the Broncos when they face the Hokies on Monday night? Me, too.

After the jump, I take a stab at identifying some key areas, match-ups, and factors for both teams when they face off on Labor Day night, but chances are I didn't get to even half of them. Let me know what factors you'll be watching when these two teams take the field. Let's discuss.

You know how Colin Kaepernick plays like garbage every year against Boise State? That's George Iloka's doing. Boise State likes using the sure-tackling safety to spy on mobile quarterbacks because Iloka is, well, a sure tackler. He may get the call to go at it again on Monday night, if the Broncos can spare him from helping in coverage downfield.

Kellen Moore likes pressure in his face about as much as I like listening to Idaho Sports Talk. That is to say, not at all. If the combination of Will Lawrence, Thomas Byrd, and either Joe Kellogg or Nate Potter can keep VT's big uglies at bay, the Bronco passing offense will have time to click. Plus, as much as Boise State likes to get its play-making running backs on the edge, there will be at least three or four occasions where a tough two yards are needed to extend a drive. And those yards will be gained or lost up the middle. Preferably, gained.

Virginia Tech blocked three of its own punts during fall scrimmages, so I'd venture to guess that Boise State will be sending the house a time or two. Plus, Saunders will be making his first collegiate start at punter on Monday night. Oregon did the same thing last year, so the shank party could be back on. BYO7UP!

What Virginia Tech can do to win

For starters, it would help to run the ball effectively. TCU didn't even bother trying this in the Fiesta Bowl, to their doom. I'd imagine that the Hokie gameplan will be a little wiser if for no other reason than all they have to do is photocopy every Hokie gameplan from the last decade and it will be ground-based. Laziness is their best strategy at this point. If the combination of Ryan Williams and Darren Evans get 40 carries and average four to five yards a pop, Virginia Tech will be in good shape. Like Sean Salisbury on Nutri-System. 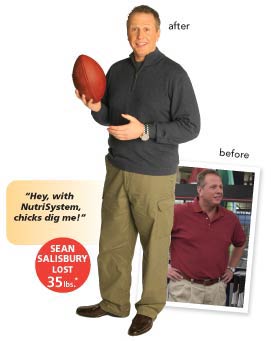 Skinnier and younger! (via www.weightloss-plan-review.com)

As strange as it sounds, Virginia Tech could give up over 400 yards of offense to Boise State and still win, so long as those yards all come between end zones and never in end zones. Holding the Broncos to field goals would keep the score close and put additional pressure on Kyle Brotzman, which is not what he needs. He needs a Pablo Picasso field with no left hashes.

What Virginia Tech can do to lose

Defending Boise State's offense is like cracking a safe. Defending Boise State's offense while breaking in seven new defensive starters is like cracking a safe if you are deaf and have no thumbs. It takes a lot of discipline, focus, preparation, and concentration - even more so when you're not at 100 percent. If the Hokie defense fails to deliver in the discipline department, the Broncos will exploit those areas until the cows come home. Which is about 11:30 p.m. ET because cows have work in the morning.

The Bronco defense showed last year that it will give you three or four opportunities per game to make a big play. It's up to you to make them count. Tyrod Taylor and his big play receivers know how to make good on big gainers, but rust, pressure, and the hot breath of Shea McClellin down your neck might make that tougher. Miss their big-play moments, and the Hokies might be kicking themselves on Tuesday.

What Boise State can do to win

The Broncos are brutally efficient on offense, especially when it comes to getting a fresh set of downs. Converting third down is a big reason why year-in and year-out Boise State has one of the nation's best offenses. They're always on the field. If the Broncos can keep drives alive, the Hokie defense will get worn out, BSU defense will get a breather, and the Broncos will get points - hopefully touchdowns - for their trouble.

Stopping the Virginia Tech run game would be nice, but I won't hold my breath. Instead, jumping out to a big lead might be Boise State's biggest defensive advantage because it would force the Hokies to take more risks, ditch the ground game, and play right into the hands of the Broncos' opportunistic defense. (I mean opportunistic in a good way; you make your own luck and Boise State's defensive players put themselves in positions to make some really great plays.)

What Boise State can do to lose

Losing the battle in either trench would be a big blow to Boise State's chances. I do not doubt that Boise State has talent up front, and I do not doubt that they can go toe-to-toe with the Hokies in physicality. This team is a long way removed from that Poinsettia Bowl mauling. I will say that I am curious to see how Boise State's new backup DTs do (Michael Atkinson and Ricky Tjong-A-Tjoe) and how the defensive line depth as a whole holds up if Ryan Winterswyk can't go.

Rotating in and out on the offensive line probably won't happen, so it will be up to the Bronco starting five to dictate play up front. Most important will be the run game. Boise State has survived poor rushing performances before, but gaining less than 2 yards per pop will seriously hamper their odds of beating the Hokies. If the Bronco line doesn't open holes, things could get scary. Like Sean Salisbury on Nutri-System.

Skinnier and Photoshopped! (via www.weightloss-plan-review.com)

What factors do you think will be most important for the game? What must Boise State do to win? What must Virginia Tech do to win? Share your hopes and fears in the comments.