Boise State travels to the dusty burg known as Las Cruces, New Mexico this Saturday to take on the Aggies of New Mexico State University. The Aggies have had a rough go of things this season, but have been remarkably consistent in allowing almost exactly 42 points per contest to their foes. The Broncos have fared better over the same span, most recently winning a 37-24 match against the Oregon State Beavers. Will the Aggies fare any better this year? It's doubtful...but politeness dictates that I don't emphatically say "not a snowball's chance in Hades". What we do know is that we don't know nearly as much about the Aggies as we should. That's where useless factoids and childish insults come into play. It's time to know your enemy, Bronco fans. Take notes.

10) One theory as to how Las Cruces, New Mexico got its name suggests that sometime during the 18th Century, a bishop, a priest, a Mexican Army colonel, a captain, four trappers and four choir boys were attacked near the Rio Grande and only one—a boy—survived. Crosses were erected in their honor, and the name, El Pueblo del Jardin de Las Cruces, (the City of the Garden of Crosses,) evolved. Years later, a priest, a rabbi, and a minister walked into a bar near the site. All enjoyed themselves immensely but nothing humorous happened there whatsoever.

9) NMSU's first graduating class, the class of 1893, had just one member—Samuel Steel. Steel was set to become the first graduate of what was at the time known as the New Mexico College of Agriculture and Mechanic Arts, but graduation was cancelled when Steel was was murdered the night before the ceremony while delivering milk in Mesilla Park. Steel's uncle, Judge John McFie, was one of the founders of the school and his funeral sermon was delivered by college president Hiram Hadley. In 1995, a section of Interstate 10 near NMSU's campus was renamed "Sam Steel Way" in his honor.

8) The founder and first president of New Mexico State University was an eastern-born Quaker educator named Hiram Hadley. According to his obituary, Hiram Hadley wished to see "3 principal items" accomplished in his lifetime: National Prohibition, Women's Suffrage and International Peace. Hadley died in 1922, and as such, lived to see two of those 3 items come to fruition. Item number 4, "Never hire Hal Mumme", was also scrawled on a piece of parchment, but sadly, was not discovered until 2006, when it was already too late. 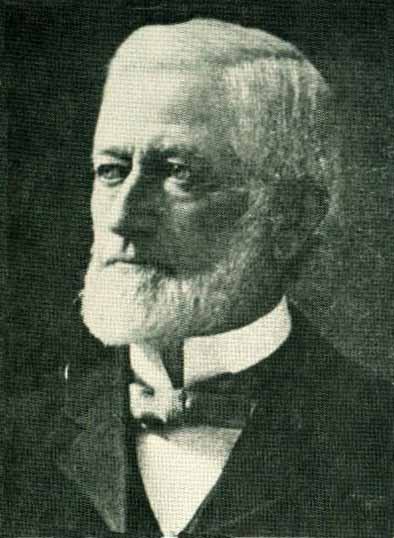 7) New Mexico State is home to the world's hottest chile pepper. In 2006, NMSU professor Paul Bosland discovered the Bhut Jolokia pepper, which measures at 1,001,304 Scoville Heat Units (SHU). For comparison, an average jalapeño pepper measure 10,000 SHU. In 2007, during the ESPN broadcast of the NMSU/UNR game Rob Stone, the Billy Bush of sideline reporting, decided to give it a little taste test.

Quick! Somebody hide the milk!

6) New Mexico State has never lost a bowl game. Of course, they've only been to three, and none since 1960—but still, no one can away their 1960 Sun Bowl victory over Utah State, their 1959 Sun Bowl victory over North Texas or their 1936 tie with Hardin-Simmons in, you guessed it, the Sun Bowl. The 1960 squad went 11-0 under coach Warren Woodson but after his dismissal in 1967, the Aggies have only had 4 winning seasons.

5) One of NMSU's most famous alumni was engineer Paul Klipsch. Klipsch was an early audio pioneer and invented the high-efficiency folded horn loudspeaker...later known as the Klipschorn. The Klipschorn model speaker is still sold today the world over as well as the Klipsch Heresy™ model which is so named because his introduction of a third, central speaker during its development was derided by colleagues as "acoustic heresy". Klipsch used the same process in naming future products, among them: the Klipsch Moronic, Klipsch Flammable, and the Klipsch Thatsjustaballoftwine.

3) At every Aggie home football game, fans are treated to a showing by "Smoki the Wonder Dog." For those making the trek to Las Cruces, don't get too excited—Smoki just retrieves the kicking tee. Man, when you call a dog a "wonder dog" they'd better at least be able to fly or something. At least Boise State just calls our tee-fetching dog "Cecil" not "Cecil the Magnificent". 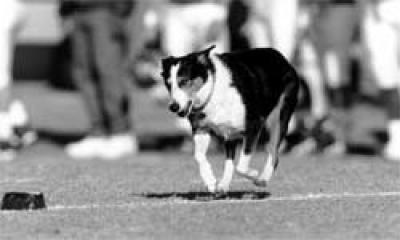 2) New Mexico State's marching band bills themselves as "The World's Most Dangerous Marching Band". The band is wanted in at least 3 states and has a similar hierarchy to the Hell's Angels, complete with an associate position, a seargent-at-arms, and of course—guy who plays the tuba. 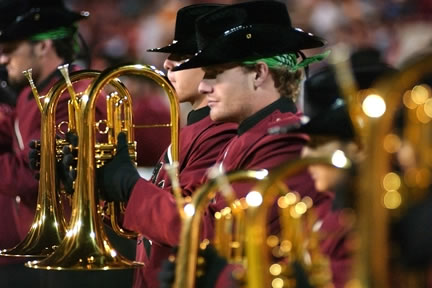 Look out! He's got a gun! No...wait...it's just a French Horn (not to be confused with a Klipschorn)

1) The Aggies have been so futile on the gridiron that they may have the only school fight song in the nation that explicitly mentions booze. I've reproduced the honest-to-God lyrics for you below, and you can reference my treatise on the subject from last season. I guess 4 winning seasons in 43 years is bad for your liver.

The hills send back the cry

We’re here to do or die

We’ll win this game or know the reason why

And when we win this game

We’ll buy a keg of booze

And we’ll drink to the Aggies‘

Til we wobble in our shoes

The hills send back the cry

We’re here to do or die

We’ll win this game or know the reason why

Thine enemy is now known...go forth and know thine enemy.