Interview with a Hokie: Five questions and a blog bet with Gobbler Country

Share All sharing options for: Interview with a Hokie: Five questions and a blog bet with Gobbler Country

To preview Monday's matchup between the Hokies and the Broncos, I asked the person who would know the most about Virginia Tech - head coach Frank Beamer. He did not get back to me, so I went with the second-best - furrer4heisman, the head blogger at SB Nation's Gobbler Country.

After the jump, read what the foremost Hokie fan thinks of the Monday nighter, VT's chances, and what the Hokies must do to win. Plus, the blog bet returns. Leave me some story suggestions in the comments. 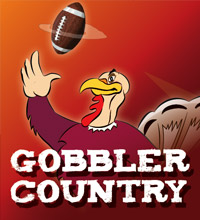 Gobbler Country is SB Nation's stellar Virginia Tech blog with a much better grasp on its homerism than we have. Take a look at their game preview, and read my interview with The Gobbler himself, furrer4heisman.

1. Describe your team's offseason in 100 words or less. "Courtesy fart" must be two of those words.

It was a boring offseason for the Hokies, which after watching what happened with UNC, I'm pretty thankful for. If about 200 dominoes had fallen we could have wound up in the SEC, but that was a pipe dream. Mainly we spent the offseason trying to find a pass rusher to replace Jason Worilds, praying for Barquell Rivers' quad and letting the offensive line gel. Tyrod Taylor has emerged as the leader of this team, which is great. I mean, the guy would do anything for his teammates, including release a courtesy fart in a room full of 10s.

I think I'd have to be Ryan Williams. He's a dynamic, consistent runner who is a threat to score on every play (cue the BSU fans: 'We don't need him! We have D.J. Harper!'). As for a guy to take from your side, I'd be tempted to take Kellen Moore just you guys wouldn't have him. But I'll go with Ryan Winterswyk. He's a great pass rusher who's very consistent and is exactly what the Hokies need on defense, especially in this game.

The dulcet tones of Ron Franklin are represented by the backfield, where hopefully Williams, Darren Evans and David Wilson will make sweet music on Monday. You know, it's possible we could see six running backs between these two teams. That would be fun. And confusing. Pam Ward's announcing abilities are represented by our depth. Because there isn't any. Seriously, please don't hurt any of our guys, OK? We've got to play at least 11 more of these games after this. By the end of the year, we could be a pretty deep team, but right now there's just too many unknowns once you get past the starters.

Our keys are the same for this game as the keys for every team in every game: Run for more yards than the opponent, get more pressure on the opponent's quarterback than they do on ours and don't turn the ball over. If you do those three things, you're going to win just about every game. We'll lose if we don't at least get pressure on Moore. We have a solid secondary, but if we give him time in the pocket he'll pick us apart.

5. On a scale of boy bands, with O*Town being not at all and N*Snync being supremely, how confident are you that your team will win on Monday?

I've never had more trouble getting a read on a Virginia Tech game than this one. My mind is right at 50-50 right now, so I guess it rates some kind of mediocre boy band. I don't know, I listened to Offspring and Weezer growing up. [/Googles] How about LFO? And I have to argue with *Nsync being considered at the top. Shouldn't it be NKOTB? Or the Jackson 5?

Bonus question: Who were you rooting for in last year's Boise State - TCU Fiesta Bowl?

I have been on the record a few times saying I not only picked TCU in the game, but gave Boise State no chance. Obviously I was wrong and you guys won me over by winning that game with strong defense. A lot of it had to do with living in the Southwest and getting to see most of TCU's games. The Boise State games I saw last year were the second half against Oregon, Tulsa, Fresno State and Louisiana Tech. Those weren't the Broncos' strongest efforts of the season. So I picked TCU and was wrong. You guys played a great game and that's the last time I'll give Boise State "no chance" in a game.

Although I did root for you against Oklahoma. That gives me some credit, right?

In what has become a storied tradition around these OBNUG parts, we will be gladly participating in a blog bet with Gobbler Country for Monday's game. At stake, a free post for the winning blog on the losing blog's site.

If you have not heard about this blog bet business, I suggest reading the Oregon blog bet that has raised the bar way too high for all future blog bets.

Good luck to Gobbler Country and the Hokies, and I do not mean that at all.