Share All sharing options for: BIFFF on Boise State versus Oregon State

We know the Bronco defense played a great game on Saturday night. But do we know why? We know that Austin Pettis and Titus Young are two of the country's top receivers. But do you know which one is Kellen Moore's favorite?

BIFFF has some answers and some theories on these questions and whole lot more. Continue reading for an inside look at the Bronco-Beaver game and some interesting facts and stats on the Boise State football.

The Bronco Institute of Football Facts and Figures (BIFFF) is a combination of game charting, advanced statistics, and good old fashioned football analysis.

The five most interesting stats from Boise State versus Oregon State

The sometimes-maligned Thompson performed better than a lot of fans expected against James Rodgers and Oregon State. The Beavers threw Thompson's way only four times all night, and the only completion with Thompson in coverage was the first offensive snap of the game on a flare pass to Rodgers for three yards.

Special teams was the great equalizer Saturday night in a lot of different ways, like the scoreboard for one. For two, average field position got a kick in the pants from the kicking game. Oregon State averaged better field position per play than the Broncos, by the slimmest margin. Boise State's average play was on the OSU 49. The Beavers' average play was on BSU's 48. 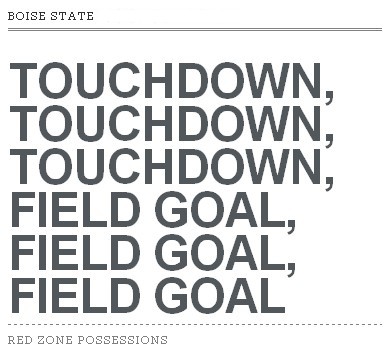 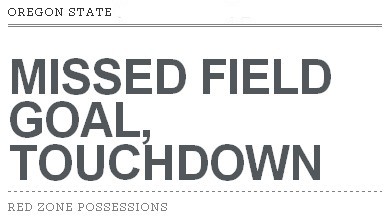 OSU may have been around midfield more often than the Broncos, but that's typically as far as they got. Boise State's defense embraced bend-but-don't-break with a big bear hug Saturday night as the Beavers only made it into the red zone on two possessions - their last drive of the first half that ended with a missed field goal and the penalty-filled drive for a TD in the 3rd quarter.

Boise State, on the other hand, had six possessions that reached the red zone. Three of them ended in field goals. 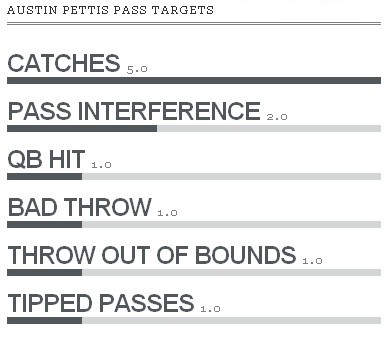 Titus Young may have finished with more catches, but he definitely didn't see balls thrown his way as often as Pettis. In all, Moore looked for Pettis 11 times on the night, completing five passes and getting pass interference calls on another two. 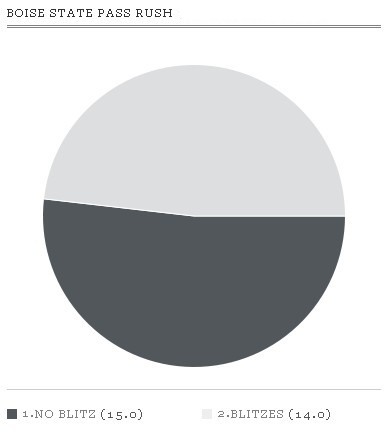 Boise State more blitz happy than you might think

Blitzing is defined by me as 5 or more rushers, something you wouldn't think BSU would need to do all that often what with its front four. Nevertheless, Boise State brought the heat 14 times on 29 OSU dropbacks.

By contrast, OSU blitzed only 11 times on 28 Kellen Moore (and Austin Pettis) throws. The Beavers blitzed only three times in the second half.

What do you think of these stats? Did you make it through that table alive? Surprised that Boise State blitzes that much or that Kellen Moore throws to Austin Pettis all the time? Share your thoughts in the comments.