Share All sharing options for: Game balls for Boise State versus Oregon State

Who and what stood out most from Boise State's win over Oregon State? Let's consult the game balls.

After the jump, I hand out awards for the game's best players, biggest moments, and much more, and then I'll open it up to you for your turn on the award circuit. What was Kellen Moore's best TD pass on Saturday night? What defensive player played best? Find out my thoughts and share yours in the comments.

Moore was the Boise State offense for large chunks of the game when the running attack wasn't clicking. He helped get the Broncos out to their big lead and helped keep them there. Three touchdowns, 288 yards, zero INTs, and zero sacks are very Kellen-Moore-like numbers, but there were also these stats: 70 percent passing and all three scores on throws over 15 yards. Kellen Moore can throw the deep ball. And yes, it doesn't hurt when Titus Young is 20 yards behind the nearest defender.

Worst description of Kellen Moore in a game recap

Floppy-haired? Is there such thing as Prosser, Washington, bigotry?

Drive of the game

The Broncos got the ball in the fourth quarter with nine minutes remaining and a 10 point lead. Ten rushes and a Doug Martin reception later, there were two minutes left and Oregon State needed to score two touchdowns to win. I distinctly remember looking at the clock and suddenly realizing that the game was over. Kind of like I do every Sunday afternoon for the late NFL game after I take a two-and-a-half quarter nap.

Credit Martin's rushing and receiving, which accounted for 61 of the drive's 67 yards. Credit the Boise State offensive line for controlling the line of scrimmage and grinding things out. It was exactly the type of drive that Boise State needed to show it could have - a clock-grinding, defense-deflating, game ender. Those will come in handy during the second quarter and beyond of WAC games.

Mr. Cellophane (in a good way!)

How did Thompson do on Saturday night? Well, I hardly heard from him, which I believe means he did great. Thompson was credited with three assisted tackles and one pass breakup, but perhaps more importantly, OSU's James Rodgers only had two catches for 11 yards. Granted, Rodgers didn't last the whole game, but he did play a very quiet first half. The Broncos got the good side of Dr. Brandyn and Mr. Thompson on Saturday night.

Worst kick of the game

You thought it was going to be something with Boise State's special teams, didn't you? Well it very well could have been what with Trevor Harman's scattershot kickoffs, but the biggest leg whiff of the night came off the foot of OSU kicker Brian Kahut who shanked a 25-yard field goal just before halftime that would have made the margin 11.

Now might also be a good time to mention that Kyle Brotzman was 3-for-3 on field goals, including two makes in the fourth quarter that provided the Broncos with a two-score advantage. Brotzman > Kahut, which was Boise State's one and only special teams win of the night.

Most talked about hit of the game

I wasn't expecting to write about this, but it seems that people want to talk about it so here goes. I don't believe that there was anything wrong with the Winston Venable hit on James Rodgers. Venable was not head hunting. He was not targeting Rodgers. He was pursuing the play and fighting through a block.

Brian Murphy intimated that Venable might get a suspension for the hit since it was helmet-to-helmet. Hopefully that's not the case since it was just a tough football play that happened to end very badly for James Rodgers.

Don't get me wrong, the pass to Pettis was a thing of beauty and the pass to Young was, well, that wasn't as beautiful. Either way, Moore to Shoemaker was my favorite touchdown pass of the night because of when it happened (late in the 3rd quarter with BSU up seven) and how it happened (Moore put a perfect ball right on Shoemaker's hands with closer coverage than on either one of his other two TD tosses).

Game ball for worst people on earth this week

Seriously, what was that? 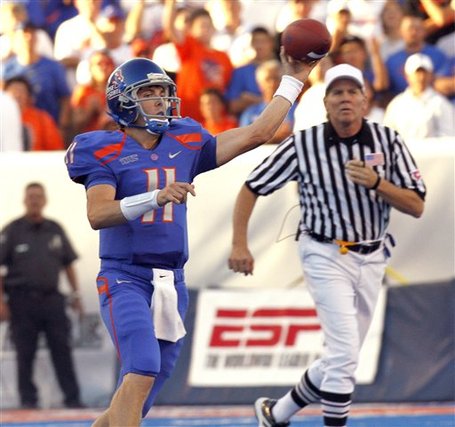 Ref: "I do not like that Kellen Moore is left-handed. Flag!" (via cdn0.sbnation.com)

Who gets your game balls for Boise State's win over Oregon State? Did you vote for Moore or Martin? Still need to vent about the officiating or special teams? Share your thoughts in the comments.