Boise State is entertaining a BCS-conference Top 25 team on Saturday night, and I am appropriately nervy. With OBNUG's game previews in the bag, it's time to vent some last-minute thoughts, hopes, and fears prior to kickoff. Join me?

After the jump, I discuss home field advantage, the threat of Jacquizz Rodgers, and much more. And then I'll open it up to you. What do you need to get off your chest and out of your head prior to kickoff? Let's discuss.

How much is Boise State's homefield advantage worth?

Phil Steele does an annual breakdown of home field advantage for every D-1A school, using factors like stadium size, attendance, win-loss, etc. His findings for 2010: Boise State has a 6-point advantage at home, the best in the country.

Can't say I disagree with that. Playing at Bronco Stadium is like playing playing in an airplane hangar filled with buzzsaws and hunter camo. In my opinion, the main reason why this Oregon State game did not get more attention during the offseason was because it was being played at Bronco Stadium. Boise State simply does not lose here, so why get worked up for six months entertaining that possibility? One week worth of worked up is plenty.

The majority of Boise State's home winning streak has been built against WAC teams, most of which are not used to that type of atmosphere. So what about BCS competition coming to Boise? Here are the results since 2002.

The outcomes are no different than your standard edition WAC beatdown (the Oregon game was far more of a beatdown than the score indicates). But the sample size is simply too small to draw any concrete conclusions.

So the question goes to you: What type of advantage does Bronco Stadium afford BSU against BCS competition? Do big, bad BCS schools get fazed by the blue turf and 35,000 screaming fans?

And does it really even matter? I mean with the fan color scheme that BSU has chosen, half of Oregon State's players will be cross-eyed by the second quarter. 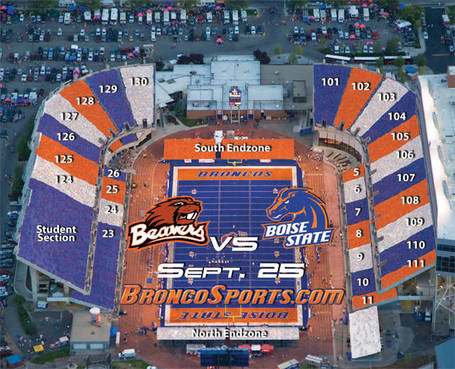 The eyes! They burn! (via image.cdnl3.xosnetwork.com)

Put this in your mindtrap:

You tell me whether or not Halahuni is a concern, based on this: He was named to the Mackey watch list at the start of the year. He has 3 catches for 26 yards in two games.

Boise State rarely gets to play against top tight ends, so it will be interesting to see what the Broncos do with Halahuni. Who was the last good tight end the Broncos faced? Bear Pascoe?

Jacquizz Rodgers is no Ryan Mathews, or is it the other way around?

Reader laureate munson had a valuable take on Oregon State's Jacquizz Rodgers that I am copying and pasting here:

I just don't get the idea that he is the type of back that can do fundamental damage to our defense. Not unless their O-line can tear us a new one. I know he's shifty, explosive. But I think the straight ahead power back is (was) our D's natural nemesis.

Point well made. North-south power backs, a la Ryan Mathews and DeMaundray Woolridge, tend to give the Broncos more fits than shifty, slippery backs like Rodgers.

At least, I think that's the kind of back he is. Could it be that we are painting Rodgers with too broad of a brush? Sure, he's miniature and quick, but I get the sense that he also has a bulldozer mentality to him.

For those of you who have seen him in action, what kind of back does he remind you of? More Darren Sproles or Maurice Jones-Drew?

One thing to remember about Oregon State last week is that it was reported ( via tweet by Cripe I think) before last weeks game that a major portion of the team was battling the flu.

Yes, the OSU team did have the flu, and yes they did only beat Louisville by a touchdown at home. With that in mind, it might be prudent not to place too much Bronco confidence in OSU's result last weekend. Better get your assuredness from that TCU game. Or from Ryan Katz essentially being Nathan Enderle.

Katz will be affected by the crowd noise and intensity, and will also have to deal with a blistering pass rush. Wyoming’s Carta-Samuels couldn’t handle it, and he’s had much more game experience and is more mobile than Katz. OSU will certainly have a better run game than did Wyoming, but this will not be enough of a difference to consistently bail out Katz. I firmly believe Katz is going to have a "Masoli experience" on the blue this Saturday!

I'm very glad that "Masoli experience" is now a thing.

I’ve said it before and will say it again, expect more option plays with Coughlin on Saturday. OSU has not looked good defending it this season – especially against TCU in the season opener. I figure those Coughlin plays against Wyoming were to get some live action reps in before the game against Riley’s troops. Also expect more wildcat plays with Avery running the option.

Seeing the Coughlin package for extended snaps would have completely surprised me on Saturday, until I read this comment. It makes perfect sense the way Sacto explains it.

That said, I think I'll still be surprised to see much of it on Saturday. But that comes more from my lack of faith in Coughlin than from a disbelief in scheme.

What has been keeping you up at night this week? What parts of the game are you feeling supremely confident about and what parts have you nervous? How many points is Boise State's homefield advantage good for? Share your thoughts in the comments.