College Gameday finally comes to Boise State to watch the Broncos tangle with the Pac-10's Oregon State Beavers. The Beavers are coming off a too-close-for-comfort win over Louisville in Corvallis and the Broncos are coming off a laughably easy win against Wyoming. This is the Broncos first home game of the season, and the game will be aired on ABC for all to see. Whether the Broncos or Beavers are game remains to be seen, but most fans know little about Oregon State outside of their buck-toothed mascot and Dennis Erickson, so let's get to know this week's opponent a bit more through the magic of irrelevant factoids and childish jokes! It's time to know your enemy, Bronco fans...so take notes.

10) Before Oregon State's mascot officially became a beaver, a pretty random assortment of animals and the like were adopted by the school's numerous sports squads. The first such mascot was "Jimmie the Coyote"...so named because it was an actual friggin' coyote owned by local sports nut (and possibly real-life nut) M.H. Kriebel. Soon after, the school had what some would refer to as a "human mascot"...John Richard Newton Bell. Bell was a Presbyterian minister in Corvallis and a longtime member of the OAC (Oregon Agricultural College) board of regents who just happened to be a passionate supporter of the football team. After a Civil War (Oregon State's yearly game against the University of Oregon) victory, Bell would march to the Marys River and toss his top hat into the water as a token of celebration. The first such hat-drowning came in 1894 and soon became a yearly social event that saw scores of Corvallis residents make the trek to the river as well. Bell's devotion to the club (and disdain for top hats) earned him the distinction of being named the school's official mascot, despite the fact that he wasn't an anthropomorphic animal with an oversized cranium. The school later honored Bell by naming their football field "Bell Field"—a name that stuck until the 1950s. 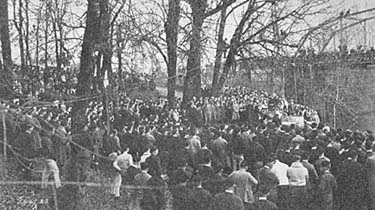 9) The original "Benny" beaver mascot was drawn by artist Arthur Evans in 1951. Evans, who was a graphic artist for the Angeles Pacific company, drew a lot of mascot characters for car window decals and apparently liked to leverage his work for numerous clients. When OSU tried to register the original "Benny" character as a trademark a few years back it was discovered that Cal Tech had been using the same character for years, just with different initials on the beanie. Evans' design got even more play when it was featured as the school mascot in the movie Teen Wolf, which rivals Hoosiers as one of the best high school basketball movies of all time. 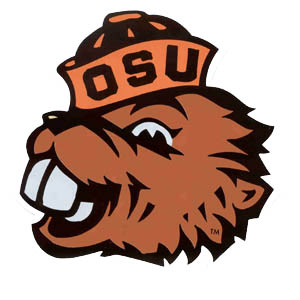 8) The 1962 Heisman trophy went to Oregon State QB Terry Baker—the first recipient to play west of Texas. His award-winning year, Baker passed for 1,738 yards and rushed for another 538 while also serving as the team's punter. Also a standout basketball player at OSU, Baker led his team to the Final Four the same year he won the Heisman...a feat that has yet to be duplicated. Baker was Sports Illustrated's 1963 "Sportsman of the Year" and also set several records for oldest-looking college athlete, which were only recently broken by Ohio State's Greg Oden. 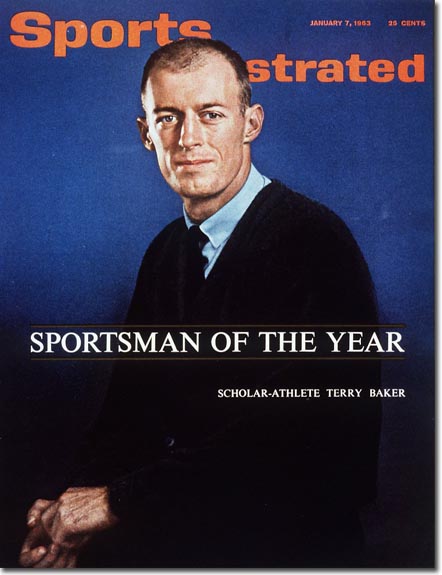 Baker being recognized by Sports Illustrated for his handsome cardigan.

7) The "blood is thicker than water" award goes to OSU (neé OAC) alum Thomas J. Autzen. Autzen was a 1909 graduate of the institution and soon thereafter took over his family's milling business and turned it into one of the Northwest's largest manufacturers and suppliers of plywood. Autzen's heel-turn (at least in Beaver fans' eyes) came in the 1950s when he established a foundation, and supplied the largest donation ($250,000) towards constructing the University of Oregon's football stadium—to this day, known as Autzen Stadium. Autzen's confused allegiance can be traced to his son, Thomas E. Autzen, who attended UO in the 1940s. The gall of that man, lending his name and money to the construction of a bitter rival's stadium! I guess I shouldn't mention that Boise State's field namesake and "father of Bronco football", Lyle Smith, is actually a University of Idaho alum, right? Oh crap, I just did.

6) In 1913, Oregon State's poultry department (just past the milk on aisle 4) received broad acclaim for producing "Lady McDuff", the first chicken to lay more than 300 eggs in one year (303 total). Lady McDuff's egg-laying prowess drew admiration and suitors from all over the globe—most notably, one "Foghorn Leghorn", a dapper gentleman from Kentucky. 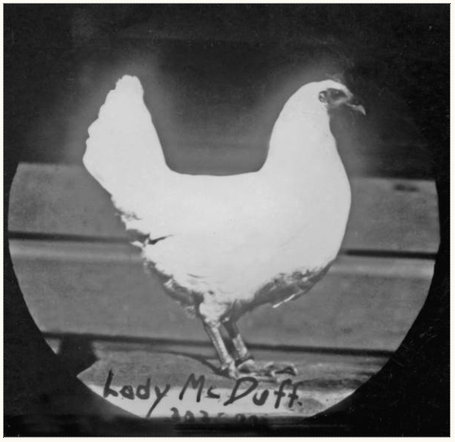 A veritable egg-laying machine...and what a lady!

5) A short time before Dennis Erickson was born, another Beavers coach was making a name for himself.  F. S. "Norky" Norcross, a former University of Michigan quarterback, led the 1907 football squad to a perfect 6-0 record, capped by a 10-0 victory over St. Vincent College (now known as Loyoloa Marymount). Norcross' squad took home the Pacific Coast championship that year without allowing a single point to an opposing team. That's what you get for calling a guy "Norky".

4) High-jumper Dick Fosbury, creator of the modern high jump technique now known as the "Fosbury Flop", is an OSU alum. Fosbury won the gold medal at the 1968 Olympic Games in Mexico City using his "radical" new technique, before which athletes would just hurtle their bodies headfirst over (or under) the bar whilst shrieking and wearing lederhosen. I can't confirm that last bit because the internet doesn't go back that far. 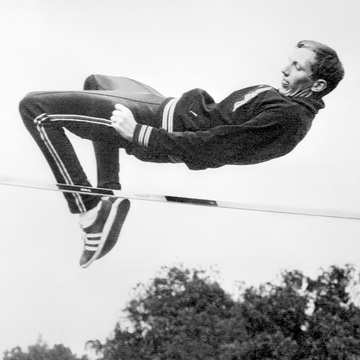 3) OSU, at the time known as the Oregon Agricultural College, played their first football game on November 11, 1893 against Albany College. The raucous affair drew nearly 500 curious spectators (many of whom paid as much as a dime to see the contest) and the then-mascotless OAC squad defeated Albany College by a score of 62-0. The 1890s-style beatdown reaches more epic proportions when you take into account that a) the "forward pass" was still illegal b) touchdowns were only worth 4 points, and c) Doug Martin wasn't born yet. One Brady F. Burnett scored the first recorded touchdown in school history on a fumble return.

2) The Beavers currently play their home games at Reser Stadium, capacity 45,674. The stadium was previously named Parker Stadium, after businessman Charles T. Parker...who met the requisite "old dude with lots of money" requirement for stadium naming rights. In 1999, the stadium was renamed in honor of Al and Pat Reser, owners of Reser's fine foods and makers of some darn good burritos and salsa, might I add. With the renaming of the stadium came a new tradition that tips its hat (or callously throws it into the river) to the stadium's benefactors—after every home Beaver touchdown, frozen burritos are hurled onto the field which are then scooped up by a retrofitted zamboni (or not).

1) In 1878, the guns and rifles that were used in military drill by the school were taken away to quell an uprising of Nez Perce indians. This unprecedented action wasn't taken again until 1969, when the OSU drill team's batons were taken to help beat back out-of-hand hippies staging a "love-in" on the campus quad.

Now you know your enemy, I expect you to act accordingly.