Boise State has released its depth chart for the Oregon State game, and it is very bad news if you have Mitch Burroughs on your fantasy team. Also, you probably do not understand how fantasy football works, so that's strike two.

No Mitch Burroughs means more Geraldo Hiwat and Aaron Burks, which can only be a good thing, right? Join me after the jump for a discussion on how much Burroughs will be missed as well as a whirlwind tour of the rest of the Bronco roster.

Disclaimer: Depth charts mean as much as you want them to mean. Keep in mind that things change over the course of a game week and that game situations, injuries, and performance will render some of this depth chart moot. Still, it's fun to speculate ... with hyperbole! Mitch Burroughs will never see the starting lineup again!

The most serious Boise State injury in the Wyoming game belonged to Burroughs who suffered a high ankle sprain after getting rolled up from behind on a running play. He will be out at least a month, according to Tom Scott who speaks fluent Bronco Injury Report.

"Mitch will be out for a while, he has a high ankle sprain," Petersen said.

In other injury news:

With Burroughs on the mend, Geraldo Hiwat and Aaron Burks step into the backup lineup. That's right, Bronco fans. They are an Austin Pettis funky chicken dance away from running with the ones.

Coach Pete remained solid on the team's stance of redshirting Kirby Moore, so the Broncos will need to count on Hiwat, Burks, and Chris Potter to replace Mitch Burroughs's production. Granted, Burroughs only had one catch for 5 yards through two games, so "production" might not be the right word, but you know what I mean. Burroughs was on the field and involved in the offense on many more plays than that.

Think that stable of backup wide receivers is enough? If not, don't forget that the Broncos have some pretty WR-like tight ends, including Gabe Linehan who was on the field for BSU's two-minute drive against Virginia Tech.

Young got his hands on a punt against Wyoming after Mitch Burroughs went down and he proceeded to snake his way all over the field for a 36-yard gain. Bronco fans might get more of that on Saturday since Burroughs is out and Young is in, unless coaches think Chris Potter would be a better choice back there.

I guess there's this to think about: If you were Bronco coaches, would you want your starting receiver running 100 yards right before you start an offensive series? Probably not.

Offensive line not a jumbled mess for once

I think if you can get an offensive line to get a little bit of rhythm, and you're pleased with it, that's a good thing.

Let's all assume he's talking about these five guys and move on. Quickly!

Coughlin entered the game against Wyoming in very real situations on Saturday night and well before his appointed mop-up duty. The reason: to run the read option, natch. Coughlin went for 26 yards on 4 carries, and yes you read that right. He was effective.

The Broncos' defensive line leader is two games into the season and sack-less, thanks to constant double teams and an old man leg. Will this be the week that Winterswyk breaks through with his first sack of 2010? You better pray not, Ryan Katz. That sack is going to have eight extra quarters of aggression behind it.

Slater remains entrenched at the starting right tackle position ever since spelling an injured Brenel Myers in the team's opener in D.C. For all we know, Myers is healthy, yet Slater's performance in the starting lineup has been good enough to keep the future Ryan Clady on the bench. This has the makings of a much less exciting Tom Brady - Drew Bledsoe memory. 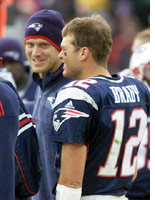 Really, the only success that Wyoming had through the air was throwing at Gavins whose night could be best epitomized by the ill-advised moonshot pass that found its way over Gavins's arm and into the hands of a Cowboy receiver. He just seemed to be a step off all night long, which could very well be attributed to not being in a game situation for nine months. He should be better on Saturday.

What do you make of Boise State's depth chart against Oregon State? Excited to see what Hiwat and Burks can do? Miss Mitch Burroughs? Think this is the week that Winterswyk breaks through with a sack? Share your thoughts in the comments.