Share All sharing options for: Game balls for Boise State versus Wyoming

The Broncos cruised to a 51-6 victory on Saturday night in a game that many people thought would be much closer. People. When will they learn?

(Note: Speaking as one of those people, probably never.)

After the jump, I hand out game balls to the plays, players, and moments that were most deserving of recognition. And then it's your turn to let me know what you remember best from the Bronco win. Let's discuss.

I counted the D-line as one player on Saturday night because they really did all seem to be surgically attached to one another. There was simply no breaking through anywhere along that defensive front. Wyoming QB Austyn Carta-Samuels had his worst rushing performance of his career, and that includes games against Texas, TCU, and Utah.

You may have heard that the Cowboys rushed for negative-21 yards on the night, and while that's technically true, it does include a 26-yard rush loss on that fumbled snap plus four Carta-Samuels sacks. If you want to get down to the nitty-gritty (/nacho libre'd!), Wyoming running backs had 22 yards on 19 carries for a not robust 1.1 yards per.

Defensive line, I salute you ... from a distance ... because you terrify me.

Best performance by 600 pounds of person

Perhaps the clearest sign of Boise State's defensive domination on Saturday night was the statistical prowess of its defensive tackles. Atkinson and Tjong-A-Tjoe combined for 3.5 tackles for loss and a half a sack. Billy Winn and Chase Baker had 2 TFLs and 2 sacks. Defensive tackles aren't supposed to get gaudy stats like that. They are supposed to eat double teams and not get noticed.

Of course you know what this means: It is only a matter of time before the Idaho Statesman demands fans to come up with a nickname for these guys. I propose Chilly Tjong-A-Bacon.

In the words of Kellen Moore:

That was a duck. Somebody should have shot it.

Worst Wyoming mistake in the first six minutes of the game

Really, you could have had your pick of Wyoming blunders. There was the 3rd down drop on the Cowboys' first drive that earned my choice as goat of the game. There was the dropped INT in the end zone on the ensuing Bronco drive by Wyoming S Shamiel Gary. But the one that stung the most for WYO fans had to be launched shotgun snap that went past Carta-Samuels and into the end zone for a Shea McClellin touchdown party.

A couple of things: 1) Would the game have been entirely different if, instead of major failing on these three plays, Wyoming caught the 3rd down pass, picked off Kellen Moore, and executed a proper shotgun snap? And 2) the fumble recovery in the end zone was the exact type of break that Boise State did not get against Virginia Tech, so it's nice to know that God is rooting for Boise State again. 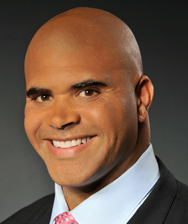 "What nice green jerseys you have on." (via www.cbscollegesports.com)

If a 51-6 blowout wasn't entertaining enough for you, Aaron Taylor said some things to fix that.

There were probably more, but these were my favorites. And just for the record, I did not find Taylor annoying. I found him endearing, in a bumbling, self-unaware kind of way.

Best hustle by a one-legged man

On Wyoming's ill-fated shotgun snap, Carta-Samuels had a good 10-yard head start on Ryan Winterswyk, but it didn't matter. Winterswyk chased Carta-Samuels down and popped the ball loose, when it looked for all the world like Wyoming would easily recover. Did you notice Winterswyk barreling toward the loose ball? My goodness, I have never seen arms pump so high and fast in my entire life. Winterswyk arm pumping is the new Ian Johnson head down.

Oh by the way, he had 94 yards receiving and wasn't the one penalized for unsportsmanlike conduct.

Comeback player of the week award

Absent from the statbook against Virginia Tech, Venable was definitely in attendance in Laramie, recording a team-high 5.5 tackles, including one TFL. But perhaps more importantly, you could sense Venable's presence on the field and you could see his positive impact on the defense. He threw himself into the mixer on plenty of Wyoming run plays.

Doug Martin roadkill of the week

Poor Chris Prosinski. You should not play near railroad tracks.

Thanks to davadams for capturing this for eternity.

Who do you think deserves a game ball from Boise State's win on Saturday night? Could you see things going differently if Wyoming had not made three early mistakes? What are your thoughts on the Pettis penalty and benching?