The OBNUG Pick 'Em contest is back for a second year of thrilling highs, embarrassing lows, and gigantic WAC spreads. If you haven't signed up yet, there's still time.

This year, OBNUG is pulling out all the stops to crown a year-end winner. Prize details after the jump, along with the basics on joining Pick 'Em, the basics for understanding spreads, and the first week of games.

We will be picking against the spread again this year. This makes it much more interesting. I mean, anyone can pick the Vandals to lose, right? Now you have to determine by how much.

How does a spread work? Let's take Boise State's game against Virginia Tech as an example.

Like last year, we will be dropping one week's score, so if you bomb a week, don't fret. If you miss a week, don't worry about it.

Also, due to the time commitment of manually tallying the results each week, we've changed things up a bit and are using the website OfficeFootballPool.com to manage our pool. The upside is less time for me to comb through your picks. The downside is the camaraderie in the comments. But we don't have to lose that. So, feel free to post your picks in the comments just like last year.

The weekly prizes are gone, and in their stead, OBNUG is pooling funds to put together a pretty awesome prize for the overall winner at the end of the season. No, not an all expense paid trip to Boise State's bowl game. Better than that. Because you can't wear a bowl game. 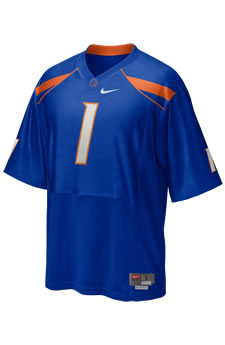 The winner gets their pick of Boise State jersey, along with a copy of the Boise State Sports Illustrated, a Bronco poster, and whatever other swag we have kicking around the OBNUG prize closet.

If a lack of weekly prizes bums you out terribly and if you happen to be a business owner with some prizes to offer, you can always drop us a line at tips@obnug.com.

Along with competing with each other, we'll also have J Bates from KBOI and Dave Southern from the Idaho Press-Tribune joining us. You'll see J's picks listed as KBOI_J in the Pick 'Em group, and you'll see Dave Southorn's once he gets them in. And, if there happens to be a week where one of them can't get their picks in, we might just have my dog Paisley filling in.

Prized out yet? No? Good. As a special treat for OBNUG readers, everyone who beats a combination of me, J Bates, and Dave Southorn at the end of year will receive a Bronco poster. That's right. Every single person.

Two years ago, I picked alone and did pretty well. Last year, with you guys joining me, I was not nearly as good. This year, we'll see.

Utah has a nice early season match up against a ranked team from the east coast at home! I didn't think that was possible. I know Utah has high aspirations, but I really like the Pitt running game.

USC may be on probation but that doesn't mean that their players don't have future NFL contracts to play for. Plus Hawaii still has Greg McMackin as a head coach.

Utah State was a nice surprise last year, but I don't anticipate them to put up much of a fight down in Boomer Sooner land. Plus Landry Jones knows how to run up the score against lesser teams.

Greg  Mark Ingram may be out of the game, but Trent Richardson is a more than capable replacement. I thought he downright looked better at times last year. Poor San Jose State...

This might be a stretch, but if Jake Locker is as good of a QB as people say he is, then hopefully he can pull his team together and make them better. Plus, Steve Sarkisian is a pretty good coach.

Two touchdowns is a large amount. Oregon State is a quality team. I think their running game should be able to control the game and be able to keep it manageable. Plus, Boise State really needs a respectable showing by Oregon State.

Seeing how a large portion of North Carolina's team is on the scout team, I don't see any way that LSU has problems with this game.

Fresno was close last year. I think they pull out the win this year at home. It will be a good early season test to see what Cincinnati has left after losing Brian Kelley.

I'm nervous about this game. Really nervous. But the more I think about it, my head says Boise State can win this game, my gut still says something different. But that's just the hangover from attending the 2005 Georgia game. I might never get over that.

How did you fill out your picks? Enticed by San Jose State getting nearly 40 points? Scared off by TCU as a two-touchdown favorite? Share your picks and thoughts in the comments.