It's hard to believe it's finally here.  With school starting, I almost ignored all the signs of the off-season coming to a close and the best 4 months of the year starting up again.  I've seen the tell-tale signs: The first Mikrino Poll, the return of Mr. Fiskers, and Vandals pretending they're real opposition (so cute).

So, as I found time to sit in front of the TV to watch the BYUtv teleconference (daughter was home sick today), I realized I had some football games that needed DVR'ing.  And then I remembered... the Loque List!  Ok, I actually hate that name, so I'm going with a simpler "Games to watch" title.

So, my fellow OBNUGgers, follow along for 5 (or more... or less...) games not including Boise State you should be watching this weekend.  My attempt will be to include games you can watch without a dual-channel DVR, but it gets pretty hard on Saturdays when the Big Teneleven's are the only games on in the mornings.  Without further ado, the list.

Utah, the original BCS Buster, plays a rematch with their 2004 Fiesta Bowl opponent and Big East pre-season favorite, Pittsburgh.  I mark this as the most important game on opening day, but seeing as it's being televised on Versus, it will probably get lower ratings than their original Fiesta Bowl appearances. My pick: Utah

Really, Hawaii has no chance at winning this game.  Lane Kiffin and most of the USC team is on payroll, and they're going to earn those paychecks!  But, it's opening weekend after a monumental off-season.  I'm going to get in as much football as I can to suppress my hatred for retarded TV contracts and my childhood team, BYU.  My pick: USC

Friday Don't do it! There's better things to do than watch Tessitore and Gilmore on a Friday night.

UConn is my pick to challenge Pittsburgh for this years Big East crown.  They lost too many close games last year and just a little bit more clean up duty could be enough to having them come out with a 9-win season.  As for Michigan, as much as I love the Wolverines, it's even funner to watch Rich Rod get fatter and lose his job.  I love how college football brings the best out of me.  My pick: Sorry, Darth Prophet, Connecticut

In the words of a famous Intern, "Stupid BYU!"  I grew up a BYU fan.  Our family had 2 season tickets in the South endzone that we siblings fought over every week, every year.  I watched Ty Detmer overcome #1 Miami in '90, and many lopsided scores as the Cougars usually put up 49 points or more against the weak WAC.  Any of this sound familiar?  But that is no more.  I hope Washington crushes the hopes of overconfident BYU fans.  There is no humble to being a Cougar fan, even in my own family.  Ok, besides the obvious recently kindled hatred, I think Jake Locker and their offensive line has too much for an absent BYU secondary.  And they don't need much on defense to stop a no name backfield and a new 2-QB system (I swear they took advice from Crowton at LSU on this... how did that work out for them?).  My pick: Washington 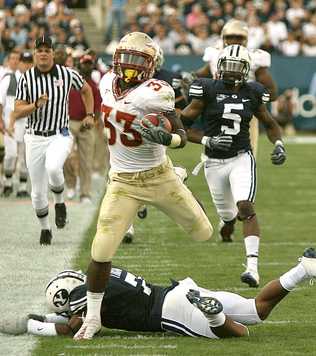 Quest for Perfection ... Just missed it. via simg.sportsbybrooks.com

Jerry Jones Stadium.  That's really the only reason to watch this game.  I mean, unless you're really invested in the team that is our closest regional match playing a team that we later play and could rely heavily on to win just for a reason of boosting our strength of schedule and perhaps bring College GameDay to Boise late September.  Not me, though.  I'm just a fan of big screens.  My pick: Oregon State

North Carolina lost most of their defense for pulling a USC.  Their coaches ex-nanny was found to writing papers for team members.  This game is mostly worth watching for the political commentary than the product on the field.  I had picked UNC to defeat LSU due to their defense showing up every now and then to smother opposing offenses (only to screw it up over ND like teams, too).  But, they have/are losing too much to be able to stop a highly predictable LSU offense.  My pick: LSU

Last year the Pat Hill found ways to lose games they should have won.  I really don't expect anything different this year, but Cincinnati lost Gilyard, Pike, and much of their coaching staff.  It's RIGHT THERE FOR YOU, Fresno.  Can you just not screw yourselves over for once?  My pick: Fresno State
Sunday Find paper bags to avoid hyper-ventilation... because anything you watch on TV Sunday will be about previewing the BSU/VT game.
Well, that's it for this week.  Queue up your DVRs and get back to the good life.  College Football is BACK!  One more thing, though... go into the schedule to be sure the Saturday morning Psych rerun doesn't have a higher priority than College GameDay. 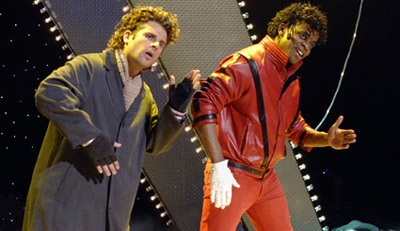