Share All sharing options for: Final pregame thoughts on Boise State vs. Wyoming

Boise State's first Saturday game of the season is almost here and you know what that means: anxiety! A whole day's worth of it.

With the Bronco game looming on Saturday night, there will be plenty of time between now and then to get worked up over nothing. What kind of nothing? I'm glad you asked. After the jump, allow me to vent what's on my mind and then let me know what you're thinking with the Boise State game only hours away. Altitude worried? Wind sleep-deprived? Let's discuss.

The wind, oh the wind!

One thing I didn't factor in when I wrote my preview of this game was that the city of Laramie was built inside a wind tunnel.

There should be an over/under on the wind speed at every home game in Wyoming. "The wind dies down later in the day." Correct – the wind only blows at 50mph after 5pm

The sentiment above from OBNUG reader Bluesport was echoed by many other fans who are most likely still picking sand out of their orifices after Boise State's trip to Laramie in 2006. But fear not, Bronco Nation. Weather.com predicts that wind speeds will only reach 12-18 miles per hour on Saturday night. A summer breeze like that makes me feel fine (blowing through the amber in my mind).

On a scale of environmental factors, I say that altitude > wind > humidity. That's why this Know Your Enemy nugget gave me pause:

At 7,220 feet above sea level, (War Memorial Stadium) is the highest altitude field in Division 1 football.

Reasons why this concerns me: I have trouble breathing at Idaho resort towns of 5,000-foot altitudes, and I am mostly just eating chocolate in gift shops. Reasons why this does not concern me: Boise State is deep at most every position and will sub liberally, Bronco coaches have been to Laramie before and know how to prepare the team, and the Broncos train as hard as any team in the country - yes, even SEC schools. 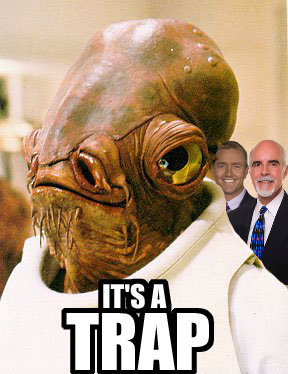 It's a trap, says Kirk Herbstreit and Tom Scott

When pundits and columnists are not raising cain over altitude and wind, they are harping on this game being a trap for the Broncos. According to Tom Scott, this is why he and Herbstreit are dubious:

Not only because it’s sandwiched between the endlessly-hyped matchups against Virginia Tech and Oregon State (Herbstreit’s reason), but because there’s history here (my reason).

Herbstreit's reason makes sense at face value. Most teams need a reminder to play week-to-week to avoid upsets in games they might look past. But Boise State is not most teams. The Broncos are never guilty of looking ahead to next week. The only thing they can be guilty of is looking past bad teams on their schedule (see UC Davis last year). Wyoming is not a bad team, and the Broncos know that.

As for Tom Scott's reason, I am going to have to respectfully disagree. Past performance is not an indicator of future results. There was no Dave Christensen and Austyn Carta-Sameuls in 2007. There was no Kellen Moore and Doug Martin in 2007. If Saturday's game is another close one, it will be because of factors on the field, not because the past ordained it so.

One more Tom Scott clarification before I let him go:

Trap games are typically games where one team comes out flat or uninspired and slogs their way through. Boise State owned Tulsa in the box score and there was a distinct advantage on the field for the Broncos. A couple of blown coverages and some untimley 3rd down failures kept that game close. I think that if we're picking trap games from last year, we have to go back to that UC Davis game. Not that I ever want to go back to that UC Davis game.

The game nobody is talking about

Seriously ... it's really quiet out there.

Maybe it's just an expected letdown from the hype of Virginia Tech or maybe it's because no one has CBS College Sports, but there is definitely less Bronco talk going on this week than there was last week. I have friends going out of town, and everyone knows you never go out of town during football season. Help me out here, Bronco fans. Is it just me or is this game flying under the radar?

Talk me off the ledge, people. Not that I'm out there very far onto it, but I definitely know where it is and how to get there at 4:00 on Saturday afternoon.

2 Weeks to prep. That’s all that needs to be said. BSU coaching staff will have an offensive game plan that will expose and exploit the Cowboy’s weaknesses. The defense will be fully prepared to take away their passing game and shut down their QB.

You never want to give the Broncos extra time to plan, which is why New Mexico State lobbied so hard to get their game against the Broncos played at 6:00 a.m. the Sunday after Boise State's Oregon State game. An extra few days should come in handy since it sounds like Wyoming's offense is on drugs and therefore wacky.

I think it’s possible the emotion of playing for a fallen teammate can be an intangible for the first series or two of a game. But eventually, you’re going to have to settle in and focus on gameplans and instincts.

Agreed. I half-jokingly said that this game could be tied 17-17 at halftime before Boise State pulls away for a big win. Now, I only am one-quarter-jokingly saying it.

After Tyrod Taylor put on a how-to-be-a-true-dual-threat clinic on Labor Day, I expect the Bronco defense to do one thing; crush the will from Carta-Samuels' poor unfortunate soul. They will make him a pocket-passer, with Wyoming's help of having absolutely no running game. Then, they will crush said pocket. Voila, Carta-Samuels Juice!

If you buy into the fact that the Wyoming offense is a smaller, less good version of the Virginia Tech offense, then you have to assume that the Broncos will have no trouble stopping the Cowboys. I buy that. Mikrino buys that. But I'm not going to buy Carta-Samuels Juice. That sounds disgusting.

How are you feeling the day before Boise State's game against Wyoming? Nervous? Antsy? Confident? Altitude sick? What is keeping you up at night or helping you sleep better? Share your thoughts and vent in the comments.