Share All sharing options for: BIFFF on Boise State versus Virginia Tech

These are questions that game charting and advanced stats can help answer, and it just so happens that BIFFF specializes in each. After the jump, get the bonus statistics on Boise State - Virginia Tech that you can't find anywhere else, including irrefutable evidence of Harper and Martin's ridiculous talent.

The Bronco Institute of Football Facts and Figures (BIFFF) is Boise State statistics on steroids - the legal ones that make things better and have no negative side effects like impotence.

The five most interesting stats from Boise State versus Virginia Tech 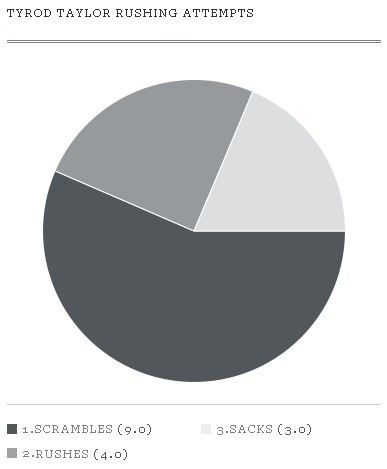 The final box score claims that Taylor had 73 yards rushing on 16 attempts, but you can't fool me that easily, box score. Truth is, Taylor had one yard on four rushing attempts (three of which went for negative yardage and the fourth for nine yards). The rest of his carries consisted of three sacks for -12 yards and nine scrambles for 84 yards.

Think about how different Monday night would have gone without a mobile quarterback in Virginia Tech's backfield. Stick a statue back there and the Broncos may have had nine coverage sacks rather than nine coverage scrambles.

Safe to say, the Hokies were not afraid to go after Boise State's No. 1 cornerback. In fact, one series in the second half, the Hokies went at Thompson on three out of their four pass attempts - an interference penalty, an overthrown deep ball, and a TD toss where Thompson missed the tackle.

The numbers above are as accurate as I can get them; it's possible that some listed targets were actually zone coverage where Thompson just happened to get there first. But regardless, teams used to spend long stretches not even looking Kyle Wilson's way. It looks like that won't be the case with Thompson this year. 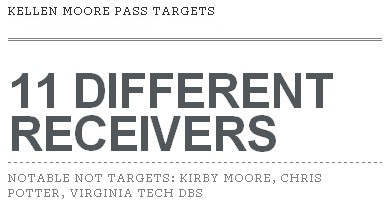 He completed passes nine different receivers and missed on passes to Geraldo Hiwat and Jeremy Avery. 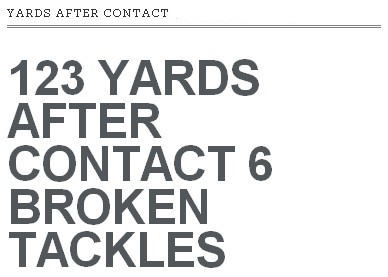 The duo of Harper and Martin broke six tackles Monday night (Martin broke four, Harper broke two), which is impressive enough. But how about those yards after contact? Seventy-five percent of their rushing yards came after contact. Eight of Martin's 12 carries had YAC, and three of Harper's four carries did. 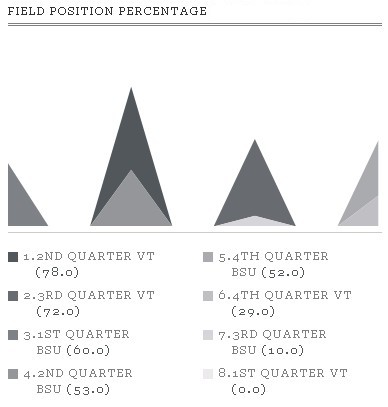 Not sure what you're seeing here? Let me explain. Field position percentage basically figures how many plays your team spent on the other team's side of the field. The figures above - in all their gray confusion - show the breakdown of quarter by quarter for both teams.

Virginia Tech put up the lowest FP% in the first quarter but also finished with the two highest FP% quarters in the second and third, which is not coincidentally when they started taking charge. Interesting, if you can understand any of it.

What do you make of these numbers? Feel any better knowing Boise State's coverage was solid nine more times than you thought? Have a new appreciation for Doug Martin and D.J. Harper? Share your thoughts in the comments.