We've got 28 days until kickoff...so today we'll be highlighting #28 on the Boise State roster—Jarvis Hodge

At Mercersburg Academy, Hodge was named team MVP after he led the team to a Mid-Atlantic Prep League championship by rushing for over 1,000 yards and 13 touchdowns. Prior to playing at Mercersburg, Hodge played ball at Mountain Point High School in Phoenix, where he was named all-region as a tailback after rushing for 1,180 yards on 110 carries (10.7 YPC), and all-state at cornerback. Boise State was the only school to offer Hodge.

Jarvis' game has nothing in common with the Pocatello legend, but hey, they're both running backs, right? 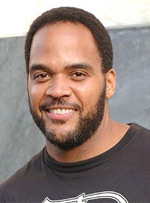 Being stuck behind Ian Johnson, Jeremy Avery, Doug Martin, and DJ Harper from the beginning of his career.

Yikes. Hodge has a long year ahead of him.

Conservatively, Hodge would be considered 4th on the running back depth chart, though he may be 6th. It's really depends on the situation. Considering that Malcolm Johnson is battling some academic issues this Fall and Matt Kaiserman is battling some leg issues, I suppose you'd have to say that Hodge currently fits in somewhere behind Doug Martin, Jeremy Avery, and DJ Harper, but that means that his carries this season will be few and far between and mainly relegated to garbage time—basically the same as it's been for the last 3 seasons.

Hodge is not a bad running back by any stretch, and you have to admire the fact that he's quietly kept grinding away since his freshman season. It's just that he's not as fast, elusive, or really just as good as the aforementioned trio...and the other Fall ball holdouts are probably more likely to get the call in a pinch as well. Hodge actually got the least amount of carries (12) in 2008 and broke the 20 carry plane in 2007 and 2009, so I think in 2010 he'll get somewhere between 15 and 25 carries in an ideal situation. He's still managed to be quite productive in garbage time, and I think he's benefited from the fact that we're usually in run-out-the-clock mode (and prevent a Mike Coughlin turnover mode). The fact remains...as good as Hodge is, he isn't one of our top backs and there is little room for extra carries in a backfield as stacked as the Broncos'. I hope that his senior year can end on a high note and he's asked to give a Brett Denton-like curtain call—he deserves the recognition for all his hard work and dedication.