Hard to believe, but there are under 40 days until the Broncos storm the Capital to take on the Hokies. As you may remember, last summer Drew embarked on the Herculean task of counting down a different roster spot for each remaining day until kickoff. So far this year, he is batting a thousand, and he has entrusted his streak to me for the past few days. Thank goodness he's back tomorrow. Sorry, Boise State players who got stuck with me. And really sorry for the bad player look-a-likes.

We've got 33 days until kickoff...so today we'll be highlighting #33 on the Boise State roster— Tommy Smith.

Smith's recruitment was a lot like the Rockin' Rollercoaster at DisneyWorld. One minute, you're just sitting there, and then all of a sudden you're going 60 miles per hour and people are throwing college scholarships at you like crazy. OK, so not everyone was throwing scholarships at Smith. But Purdue did. And Western Kentucky. And were it not for a last-minute visit to Boise and a smattering of common sense, Smith almost became a Hilltopper.

The buzz around Smith came hard and fast after a senior season in which he was named to the Atlanta Journal Constitution's All-City team. That would be the city of Atlanta - a far tougher nut to crack than an all-city team from a city like Caldwell. In his final high school year, Smith had 87 tackles, 12 sacks, 8 TFLs, and 2 INTs. If you were ever afraid of being lost, you should have just carried a football around with you and Smith would have found you. And probably tackled you. 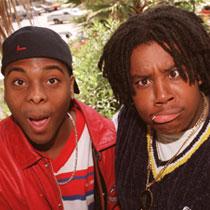 Being the butt of Derrell Acrey's jokes?

Smith found himself in the linebacker rotation last year as a redshirt freshman, and he will be right in the thick of things at the LB spot again this fall. Boise State's interchangeable front seven fits Smith's skills to a T since the sophomore can perform any number of responsibilities from rushing the passer to dropping into coverage to stepping up in the run game. Smith has bounced between both LB spots and even defensive end, and he played some safety in high school.

This fall, Smith is expected to compete at MLB with the likes of Derrell Acrey and Byron Hout and perhaps even Daron Mackey when he returns from injury. That is one loaded position, which may be why Boise State loves to sub in and out so liberally. Smith may be a year away from seriously challenging for a starting role, but his continued progress should at least net him some looks on a couple series per game.

Smith is an Atlanta Hawks fan.