Hard to believe, but there's only one freakin' week til the Broncos storm the Capital to take on the Hokies. As you may remember, 92 days ago I embarked on the Herculean task of counting down a different roster spot for each remaining day until kickoff. So far this year, we're batting a thousand, so cheer me on through the homestretch...we're almost there.

We've got 7 days (that's a week) until kickoff...so today we'll be highlighting #7 on the Boise State roster—Mike Coughlin

Coughlin was a three-year standout at Mira Mesa High School in San Diego (ask Ron Burgundy the translation) whose career culminated with being named Union-Tribune All-CIF, Union-Tribune All-Eastern League first team and Union Tribune All-Eastern League Offensive Player of the Year. As a senior, Coughlin completed 119-of-195 passes for 25 touchdowns and just three interceptions. While at Mira Mesa, Coughlin was named San Diego's National Football Foundation and College Hall of Fame scholar-leader-athlete. Coughlin was rated a 3-star prospect by Scout.com and the #55 QB in the country at the time of his signing. He had one other scholarship offer, from UTEP.

"Turn your head and Coughlin" 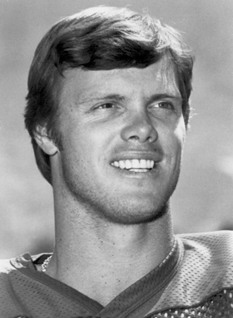 Named Offensive Scout Team Player of the Year as a redshirt in 2006. Went 3-of-5 as a backupin 2008 and threw a TD. Went 12-of-19 as a junior backup. Got married in Vegas right before Fall Camp.

Growing what was purported to be a mustache in 2008.

There was a time, we'll call the era "B.K.", when Mike Coughlin looked like he'd be the next great QB at Boise State. Heck, if you dig hard enough, you can find a bold prediction on my old blog that Coughlin would take beat out both Kellen Moore and Bush Hamdan for the starting job in 2008. Hindsight is 20/20 and I realize now that I was more infatuated with Coughlin's arm strength and height (sound familiar, NFL scouts?) than I was with his pocket presence or decision-making. Of course, this all isn't to say that Mike Coughlin is a bad QB, far from it, it's just that it took him way too long to digest the Bronco playbook and get comfortable under center...something that Kellen Moore did almost intstantaneously. Coughlin didn't fade into absolute obscurity after losing the battle to Kellen Moore, in fact, we saw more of him than Hamdan in 2008 and until the Broncos more recent recruiting windfalls at the position, Mike looked like he'd be our speed-option QB. We've got swifter QBs now that might be better suited to that role, but I'm sure we'll see Coughlin again this season in mop-up duties and since neither he nor Joe Southwick could finish off the other in the offseason battle for the two-spot, it may be Coughlin that gets called upon first to spell Kellen in case of injury or fatigue.

You have to admire Coughlin's spirit and as tough as it is to be a starting QB at the Division 1 level, it must be even tougher to be the backup QB at the Division 1 level. The thoughts of Division 1-AA or transfer has to be in the back of your mind, but so too is the knowledge that you're always one play away from being "the man". I'm sure Coughlin will get just as rousing a sendoff on senior day as the starters.

When it came time to toss the garter at the reception following Coughlin's recent nuptials, Coughlin tossed an interception.