I was originally going to do a list of five storylines for Boise State's Fall Camp, but then I had a Mountain Dew and one thing led to another and before I knew it there were 30 storylines. Oh well!

With Boise State's Fall Camp set to begin on Friday, this storylines post kicks off some preview coverage of Bronco practice. Click through the jump for what I'll be looking for over the next few weeks, and share your stuff to watch in the comments.

Each year, the Boise State players and coaches sit down and chart out a series of goals for the coming season. Is a national championship going to be one of this year's? I'm going to say no, simply because Coach Pete understands that getting to the NC game is out of the team's control. As such, I expect goals to include going undefeated, winning the WAC, not fumbling center-QB exchanges, and getting Vandal fans to commit to AA.

2. When they say D.J. Harper is at full speed is that like Lamborghini full speed or Ford Taurus full speed?

Harper is coming off a debilitating ACL injury, which takes most mortals a good season-and-a-half to get back to 100 percent. Word out of Bronco camp is that Harper is good to go for the fall, but Bronco camp also told me that my Bronco stock was worth something so take what they say with a grain of salt. Even if Harper looks righteous in rehab drills, it is an entirely different beast being tackled and sat on by Billy Winn. I don't think we will truly know Harper's status until Boise State's fall scrimmages. And I don't think Harper will, either.

3. The Joe Southwick vs. Michael Coughlin battle of the backups

Southwick won the first round in spring ball, but there's really no telling how far Mike Coughlin was ahead when this whole thing started. Expect Coughlin to enter Fall Camp as the team's No. 2 quarterback, expect me to write a passive aggressive story about why he shouldn't be, and expect none of it to matter because Kellen Moore is indestructible, like a Nalgene bottle.

The Broncos like to change up their unis right after I buy one of their existing unis, so I wouldn't be surprised if there are some new duds on the way for fall. Then again, how can you improve on shoulder flair?

5. Which inspiring, motivational word or phrase will be the Broncos' motto this season?

OBNUG friend MKingery sent in this link to a Boise State student bookstore T-shirt that purports to having the 2010 theme plastered across it. That theme? "Relentless." 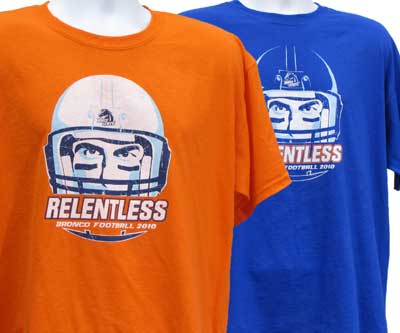 Whether or not this is the true theme, I guess we will find out. Personally, I would have gone with "Undefeatable" or "Bleed Relentlessness."

6. Someone will be returning punts and he'll probably look a lot like Titus Young

With Kyle Wilson making it rain in the NFL, Boise State's punt return spot is vacant. Young stepped in admirably in the spring, but don't count out Ebo Makinde, Jerrell Gavins, Mitch Burroughs, Chris Potter, and others, especially if Young struggles at any point with ball security.

Perhaps the one factor that could most easily derail Boise State's season is preseason injuries. Hopefully, the Broncos got all their broken tibiae and ACL tears out of their system last season. Still, chances are good that someone, somewhere, at some time during Fall Camp will go down with a bump or bruise. I propose this someone be Tyler Jackson. No offense.

Boise State's itsy bitsy teeny weeny 2010 recruiting class will hit the field for the first time this fall, and boy do I have some unrealistic expectations to unload on them. Here are the lucky nine, ranked in order of how excited I am to see them.

Will any of them earn their keep as true freshman contributors? I would love to see Ioane on the field as soon as possible, and apparently Matt Miller was promised every opportunity to play right away. But have you seen the rest of the Bronco roster? All these guys could wait a year to come in, and the team would be just fine.

9. ... and one enormously talented JC transfer

10. Daron Mackey and the parking ticket that won't go away

Mackey ran afoul of the law this offseason by not appearing in court for a traffic citation and then getting arrested for not appearing in court. This probably rates pretty low on the scale of Boise State player crimes, but it bears watching whether or not Coach Pete and his Wheel O' Punishment take any action.

11. Can Kharyee Marshall still fit in my pocket?

Marshall was a spring sensation, albeit a very small one. Many believe that Marshall needs only to put some weight onto his frame to be considered a serious contributor this fall (I don't necessarily agree, but I'll humor the idea).

Remember how inconsistent Kyle Brotzman was last season? I am trying so hard to forget.

Elkin has a chance to take some much-needed pressure off the leg of Brotzman this fall. The senior made some cameos as a pooch punter late last year, so you would think that he might be able to slip into the starting lineup. If so, I will need to make serious amends for all the Elkin jokes I've made over the past four years.

This storyline will get a lot of play this fall, but it just doesn't grab me the same way that the rest of these storylines do. Here's why: Jerrell Gavins and Jamar Taylor are basically the same person. The competition to fill Wilson's spot will no doubt be fierce, but in the grand scheme of things, Taylor or Gavins will likely do the job equally as well. Don't get me wrong: I'm still interested to see who gets the gig. But I'm not going to stay up at night worrying about it.

Already, Titus Young has switched from No. 4 to No. 1, and Jerrell Gavins switched from No. 10 to No. 4. Will there be any other switcheroos once Fall Camp begins? I don't know about you, but I would love to see Michael Atkinson wearing No. 12.

16. Remind me what Austin Pettis looks like at 100 percent

The LB blood brothers have done everything together so far in their BSU careers: come in as highly touted prospects, redshirt, get injured and miss spring ball. The only thing left is for them to start tearing it up in practices and then crack the depth chart.

It's a good question and one that I do not have the time or space to fully answer. The spring hinted that Kwiatkowski's defense will be even more daring and blitz-happy than Wilcox's was. Oh happy day, can it be? We'll probably find out more this fall when the Broncos take to their scrimmages.

Every season has one (think: George Iloka, Winston Venable, etc.). My money is on Shea McClellin, Kirby Moore, and/or Aaron Tevis.

Scrimmages did not go very well for Moore during spring ball, and the defense isn't going to get any easier this fall. While a few rabble-rousers whispered that Moore was regressing, the real reason was probably that tons of starting offensive players were sitting out injured and that the playbook was too limited and familiar for the O to shine. At least, those are the excuses I'm going with.

I dream wonderful dreams about this formation, and I can't wait to see how Kwiatkowski and Co. use it this fall. Will it be Tyrone Crawford coming off the edge as an OLB? Will Billy Winn stay around at MLB? What crazy stuff will they do with Byron Hout? It's so exciting I may need to take a nap just so I can dream about it some more.

The former TE coach, Strausser swapped with Scott Huff this season and will be running the O-line full-time this fall. Giving up only five sacks last year might make it seem like there is not much for the O-line to improve upon, but I wouldn't go that far. The running game could be more consistent, and Kellen Moore could have more time to throw. It will be interesting to see if Strausser's hand helps this unit take it up a notch in 2010.

The backup wide receiver spots will likely come down to one of the two pairs of young receivers. Mitch Burroughs and Chris Potter have the experience edge, but Geraldo Hiwat and Aaron Burks have the "Wow they are really good players" edge. I am on Team GeraldBurks. You?

24. Tackling could probably use some work

The good news is that the Boise State defense is super aggressive. The bad news is that this causes them to miss a whole lot of tackles. Jeron Johnson is very aware of his shortcomings in this area, and he has vowed to right that wrong this fall. If Winston Venable and others follow suit, the Boise State defense could take the next step, even though you probably didn't even know there were more steps to take.

These happened a lot last year, and with Thomas Byrd taking the spring off, he and Kellen Moore will have to do a cram session to get back on the same page again. That is, if Byrd is even the starting center. More on that in tomorrow's depth chart preview.

26. Two-point conversion attempts, the scourge of the earth

Boise State specialized in random 2-point conversion tries last season, a practice that ultimately cost Austin Pettis the use of his lower leg for a month or two. This spring, Pettis was in and out as the team's holder, and QB Joe Southwick saw a lot of action in his place. If Southwick continues holding, will Boise State continue two-point attempting? We might get some hints this fall.

It was bad at times last season and only really turned around right at the end of the year. No doubt the Broncos would like to fix this before that one game on Labor Day, so expect to hear a lot of red zone practice session stories over the next few weeks.

Perhaps the only noticeable flaw in his game, deep passing was focal point of Moore's offseason. He was sort of improved in spring ball, although it was very hard to tell in such limited action. Here's hoping that we get to see much more of this skill in fall and that Moore will be much more lethal with the deep ball this season.

The Boise State football team is known for its plucky walk-ons. Will any newbies join the team this fall? Of course they will. And there will probably be at least one J.C. Percy in the bunch.

There always seem to be one or two players who get moved around once the team reconvenes after a break, and while I doubt that any of the changes will be on the scale of Nate Potter to guard, any change is notable in Bronco Nation. Allow me to go out on a flier on this one: QB Mikey Tamburo switches to running back or wide receiver. I probably have never been more wrong, but hey, it was worth a shot.

And a bonus storyline ...

31. Who will be the team captains?

Last year's picks were easy: Kyle Wilson and Richie Brockel. The Broncos have a whole lot more seniors on this 2010 team, so the pickings will be a little tougher. Assuming they don't go with a weekly rotating group of captains (which they inevitably will), my picks for team captains are Ryan Winterswyk and Austin Pettis.

What storylines are you looking forward to in Boise State's fall camp? Do you have any takes on Boise State's freshmen? Excited to see how Kellen Moore and others have improved this spring? Share your thoughts in the comments.