Hyperbole alert: Is Boise State - Virginia Tech "the biggest game in the history of Bronco football?"

Share All sharing options for: Hyperbole alert: Is Boise State - Virginia Tech "the biggest game in the history of Bronco football?"

With only 10 days until Boise State's season opener against Virginia Tech [Countdown spoiler warning], it is high time for OBNUG to start with some game previews. First up? Perspective.

The Labor Day opener is being hailed as Boise State's biggest game in the history of everything. Do you agree? After the jump, I'll share some thoughts on both sides of the debate and then open it up to your comments and opinion. Let's discuss. 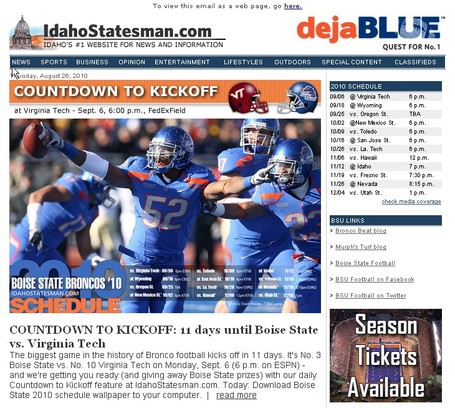 Just who exactly is calling this game "the biggest game in Bronco football history?" Well, the Idaho Statesman, for one. As a recipient of their Boise State football countdown newsletter (pictured above), I get a daily dose of hyperbole right to my inbox, or my spam folder depending on how many references to "your wife photos attached" there are.

The case for "the biggest game in Bronco football history"

In addition, the game is the first Boise State visit east of the Mississippi since the 2005 Georgia debacle. It is a matchup of Top Ten teams, played in primetime on a Monday night. And it is on ESPN 3D, which is two entire dimensions greater than any previous Boise State game.

The case against "the biggest game in Bronco football history"

Boise State has played some pretty big games in its history: The 1980 Division I-AA national championship game, the 2001 game against No. 10 Fresno State, the 2007 Fiesta Bowl against Oklahoma, the 2009 season opener against Oregon, and the 2010 Fiesta Bowl against TCU. I wouldn't blame you for picking any of those as the biggest games in Bronco history.

The Virginia Tech game is important, but if you were to ask Coach Pete, so is the Wyoming game. And the Oregon State game. And the New Mexico State game. And so on. If the rationale behind naming the VT game as the biggest in history is national championship implications, then you had better be prepared to call each and every game after the opener "the biggest game" as well.

Plus, the Broncos have played higher ranked opponents twice before (No. 7 Oklahoma and No. 4 TCU). They have played two BCS games. There are a lot of factors that the season opener is lacking. Like Joe Tessitore, for instance.

I do not think that the season opener is the biggest game in Boise State's history. I would take the I-AA national championship, the 2001 Fresno game, and the 2007 Fiesta Bowl before I would consider the Virginia Tech game.

One big reason is that this game is a season opener, so you have no idea how good your opponent is and no idea how the rest of your schedule will impact the season. Plus, beating Virginia Tech will not put Boise State on the map or confirm the team's greatness to the media. The Broncos have already arrived, win or lose. At least, that's what I'm choosing to believe.

Do you think this game is the biggest one in Boise State football history? If not, what other games would top it? Are you waiting to reserve judgment until after the season is over? Share your thoughts in the comments.