We've got 11 days until kickoff...so today we'll be highlighting #11 on the Boise State roster—Kellen Moore

While at Prosser, Kellen was named Washington's Gatorade Player of the Year, a Velocity/Prep Star All-American, first-team all-state, and Division 2A MVP by the Seattle Times. Kellen earned league player of year honors and was first-team all-league as a sophomore, junior and senior. As a Mustang, Kellen set Washington state career records for completions (787) and touchdown passes (173) and also set Washington state single-season records for completions (317), yardage (4,600) and touchdown passes (67). Kellen finished his illustrious high school career with 11,367 yards passing, 173 touchdowns, and only 34 interceptions. Kellen was rated a 4-star by Scout.com and the 26th best QB in the country. Aside from Boise State, he was offered by Eastern Washington and Idaho.

"The Tosser from Prosser" just wasn't doing it for me. 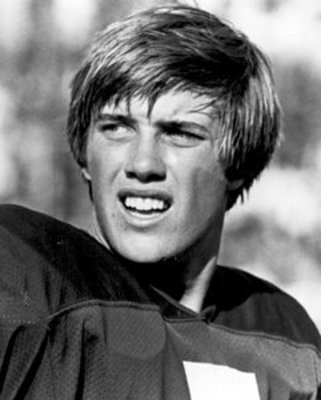 Set the NCAA single season record for the Highest Percentage of Passes Completed by a Freshman in 2008. Named WAC Freshman of the Year and second-team all-conference in 2008. Named Boise State's Most Valuable Offensive Player following 2008 season. Named to the Football Writers Association of America freshman All-America team and to the Sporting News freshman All-America second-team in 2008. Was named Walter Camp Football Foundation National Offense Player of the Week and following Oregon win in 2008. Named first team All-American by ESPN.com, SI.com and CBSSports.com and finished 7th in Heisman voting as a sophomore in 2009. Named WAC Offensive Player of the Year and first-team All-WAC in 2009. Set school record with 39 TD passes in 2009 and set the NCAA single-season record for the lowest percentage of passes intercepted (0.69%). Second in the nation in QB efficiency and second in the nation in TD passes in 2009. Completed five touchdown passes in 3 different games (Hawai'i, Idaho and Nevada).

Walked on water, but ruined a perfectly good pair of flip-flops.

What more can you say about Kellen Moore that hasn't already been said. Seriously...what can you say? The kid finished 7th in Heisman voting last season as a sophomore after tossing 39 TDs and only 3 picks. Kellen was second in QB efficiency last season (161.65) only to Florida's Tim Tebow and was second only to Houston's Case Keenum in TD passes (39 to 44) despite nearly 300 less pass attempts. On top of that, Kellen was only sacked 5 times (fewest in the nation)...a testament to the O-line, sure...but Kellen's pocket awareness is getting into supernatural territory. So what can Kellen do this year, besides continue his assault on the Bronco record books? Well, a national championship would be nice (if not somewhat miraculous) and a trip to New York for the Heisman ceremony  seems warranted as well.

The only area of Kellen's game that I thought was lacking last season was his touch on the deep ball. Kellen is always knocked for his "lack of arm strength", but I contend that his arm strength is not an issue...nor is it a factor in his deep ball problems. Kellen's real issue on the deep ball is that he throws it too far—even for Titus Young. Now, Kellen is smart and knows that if you're going to miss on a pass, you need to put it where the defender can't grab it either...that's part of Kellen's football IQ. But if Kellen can step into his throws, and mind his placement—which Bryan Harsin says he's been working diligently on—not only will this make Boise State's passing attack that much more dangerous...it probably could have meant at least a handful more TDs last year as well. We all know Kellen is a fierce competitor, and it's been well-documented that he's fanatical about film study...so I don't think it's far-fetched in the least to imagine that Kellen will have sorted out any kinks in his game by Labor Day and start another year of putting on "how to play quarterback" clinics. The only real difference this year will be the attention surrounding him...which, of course, Kellen will handle with ease.