Hard to believe, but there are less than two weeks til the Broncos storm the Capital to take on the Hokies. As you may remember, last summer I embarked on the Herculean task of counting down a different roster spot for each remaining day until kickoff. So far this year, we're batting a thousand, so cheer me on through the homestretch...we're almost there.

We've got 12 days until kickoff...but that number is the only retired one on the Boise State roster. Who wore  #12, you might ask? Jim McMillan 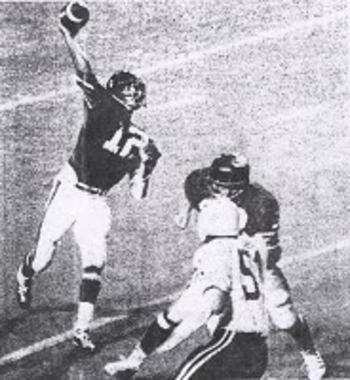 After joining the Bronco squad from Vallivue High in Caldwell, Idaho, McMillan helmed the Boise State offense from 1972-1974. He is currently sixth all-time with 6,225 yards of total offense in his career as well as eighth all-time for a season with 3,101 yards in ’74. McMillan was a first-team All-American in 1974, and was named to the Associated Press, United Press International and Kodak All-America teams. McMillan was named All-Big Sky Conference and the League Offensive MVP in 1974, and was selected in the 14th round of the NFL Draft by the Detroit Lions. 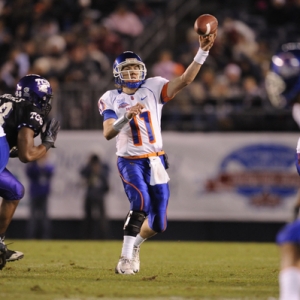 Threw five touchdown passes vs. UNLV in 1974. Ranks second (pending the end of Kellen Moore's career) among all Bronco quarterbacks with a 152.83 rating and is eighth for a single season with a pass efficiency rating of 158.46 in 1973. Passed for 5,508 yards in his career and rushed for 607.

McMillan performed a Vulcan mind-meld with Kellen Moore before the 2008 game at Autzen Stadium.

* Stats and info for this countdown were largely gleaned from BroncoCountry's All-Time numbers team article by Rocketman5000. Any blue-hairs care to share some stories about McMillan? He was before my time.