Is Boise State's defensive line better against the run or the pass? [Season Preview]

Share All sharing options for: Is Boise State's defensive line better against the run or the pass? [Season Preview]

Picking your poison against Boise State's defensive line is very much like picking between actual poisons. Either way you go, you're going to be messed up. But is one poison more damaging than the other?

After the jump, Drew and I take a look at whether Boise State's dominant defensive line does better defending the run or the pass, and then we open it up to you for your take on the topic. Which one does the D-line do better? Let's discuss.

In case you haven't heard, Boise State is going to win a national championship this year.  OBNUG's season previews are here to explain why. Today's topic: Defensive Line.

Roundtable: Is Boise State's defensive line better against the run or the pass?

You can't go wrong picking either, which is a good thing for me because I tend to go wrong when picking things. Drew and I differ on the right answer to this question: Drew with some brainy points on football analysis, me with some hackneyed theories that make sense only to me. So without further adieu, let the debate begin.

We might as well be debating whether Justin Timberlake is a better musical artist or Saturday Night Live guest. I mean, can you really go wrong with "Cry Me a River" or Omeletteville? No.

Now just because both are great doesn't mean that one can't be greater. And here is my probably incorrect assessment of which one that would be. I'm picking run defense to be the D-line's strength. Here's a rabbit trail of logic to explain why.

Boise State had 25 sacks last season, good for 56th in the country. Does that number seem low to anyone else? Compound that with the fact that Boise State employed exotic defenses fairly regularly last year that involved random blitzing and crazy formations. The 3-3-5 alone could have been credited for half that 25-sack chaos.

It's enough to make you wonder if the Boise State coaches don't trust the defensive line to get quarterback pressure with just a four-man rush. True, I understand that pressure is not the same as sacks and that BSU's four-man front is as good as any other four-man front that you can find. But is it possible that maybe, just maybe, getting to the quarterback is not their forte?

I have to say that the D-line is better against the pass because I never saw any teams tee-off on us through the air in 2009, but unfortunately did see at least one team (the Fu Manchu's squad) eat our breakfast, lunch, and dinner on the ground. We also allowed 100+ yard games to Idaho, Nevada, and New Mexico State. I know that the Broncos pride themselves on stopping the run first, but statistics show that in four of the Broncos' 10 games, they allowed rushers to at least get the the second level. 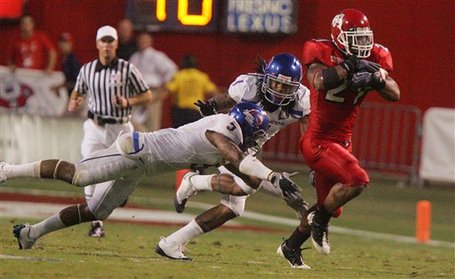 Don't get me wrong, the D-line is solid, but they are literally the first line of defense (possibly why they're called the 'defensive line') and even if the LBs or DBs miss their tackles, it generally means the D-line missed it first.

Although the Bronco sack totals in 2009 weren't anything to write home about, the D-line was able to get consistent pressure with McClellin, Swyk, Winn, and Baker and forced the QBs to make rash decisions...allowing our defensive backs to nab the 2nd most interceptions in the country.

I do think we'll see a more aggressive D-line in 2010 with Kwiatkowski calling the shots. This should lead to more sacks, but also may lead to some overpursuit. If our LBs and DBs stay home, we'll be fine, but I am a little concerned that against certain opponents (Virginia Tech), we'll allow rushers to get into open space since we've brought the house, as it were, to get after the QB.

Our D-line depth and talent is better than it's ever been, but I'm just a little shell-shocked knowing that such a great D-line is capable of making Ryan Matthews look like Tecmo Bowl Bo Jackson. VT's backs are formidable...the D-line needs to have their priority on the run in 2010 right out of the gate. The scrimmages showed that, thankfully. 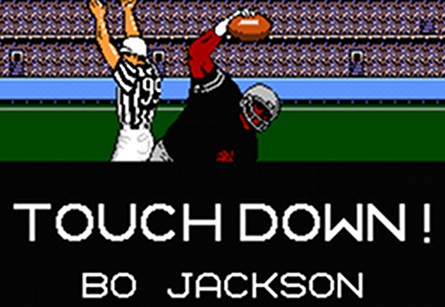 I sense we are treading into philosophical discussion territory, and me without my English-to-Dustin-Lapray dictionary!

I would take a different road when it comes to placing blame on Boise State's occasional running game mercies last season. The way I was raised (in a Kansas City Chiefs home where Neil Smith was god), the defensive line wasn't responsible for bringing runners down. They were responsible for eating blockers and letting the linebackers make plays. Am I blaming bad outings on last year's linebacker corps? It sounds that way. But I also think that playing a 4-2-5 has a little to do with it, considering that there are times when only six men are in the box.

Hey, I understand that the linebackers are responsible for making the lion's share of tackles (although re-reading my opening argument might not corroborate that), but I do think the D-line has to plug those holes and funnel the runners into the waiting arms of Winston Venable. I thought the D-line was great last year and I think they'll be greater in 2010, but if we're talking about any perceived (relative) weakness? Stats dictate that I have to say they were weaker against the run...if only for the fact that it seems a whole lot easier to measure.

I just don't think that lack o' sacks is as direct a correlation to D-line strength/weakness as poor run defense. In 5/7ths of the 2009 season, the Bronco D-line at least helped to maintain the illusion of a sound run-defense...the pass D was good all year. Yeah, I'll give credit to the DBs for that as well, but I think the D-line made many a QB wet himself, and it's awfully hard to do your checkdowns with soiled trousers.

Soiled trousers are the worst. Or so I've been told.

I see your point about quasi-good run defense being the best indicator of D-line weakness, but I can't help coming back to this one thought - kind of like a can of brain Pringles. If the defensive line is so good at getting to the quarterback, then why blitz? Ever?

If you took blitzing frequency to be a tell of Justin Wilcox's confidence in the front four pass rush, then Wilcox was downright a nervous Tim-Conway-in-Apple-Dumpling-Gang of a man. The Broncos blitzed a lot, and with great success mind me. If I knew why they did so - mistrust of the defensive line or aggressive scheme or a sadistic joy in seeing Ryan Colburn run for his life - I would feel more comfortable choosing sides.

I'll admit you went way over my head with your blitzing theorem. The D-line is going to be amazing this year as long as our boys stay healthy, and with Tyrone Crawford added to the stable, I like our chances of sadistically forcing Ryan Colburn to run for his life (I like to imagine Yakety Sax playing in the background).

At least we've reached an accord on this: The Apple Dumpling Gang was Conway's finest work outside of Dorf on Golf (in France it's known as Augusto sur Golf).

Do you see the Broncos' D-line as better run stuffers or pass pressurers? Which defensive lineman is most important to the success of Boise State's D? Any theories on how this unit may perform in 2010? Share your thoughts in the comments.