Sports Illustrated's Stewart Mandel is one of college football's most brilliant minds, as evidenced by his saying only good things about the Broncos in SI's college football preview magazine. And guess what? He's got more good things to say, and he shares a bunch of them in an interview with OBNUG.

After the jump, find out what Mandel thinks about Kellen Moore's Heisman chances, what kind of pressure BSU faces on Labor Day night, and how likely it is for TCU to pass the Broncos in the polls. And share your thoughts on these topics and Mandel's answers. Read on. 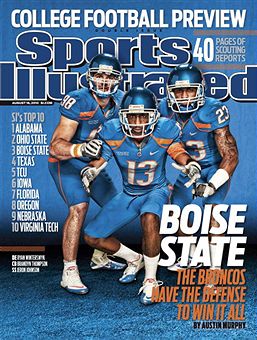 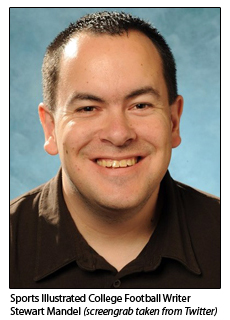 In Sports Illustrated's college football preview edition, SI writer extraordinaire Stewart Mandel has Kellen Moore on his All-America team and picks two Boise State football games for his Games of the Year list. Hint: None of them are WAC games and none rhyme with Schmoledo.

Mandel writes regularly at SI.com, he has way more Twitter followers than Andy Staples, and wrote a book about college football that I will definitely get into once someone makes it into a movie.

Here is our conversation.

OBNUG: A lot of experts list Ryan Mallett, Jake Locker, Terrelle Pryor, Case Keenum, and Kellen Moore as the country's best quarterbacks, more or less in that order. You have Moore on your All-America team. Two-part question: 1) When did you first know you were a genius and 2) what was the deciding factor for you in putting Moore above the others?

I'm sure I'll only be a genius until the first time I write anything remotely negative about the Broncos.

I think most of the lists you're referring to are almost a reverse reaction to the early NFL draft rankings that came out last spring. Moore may not be a first-rounder like some of those guys, but seeing as he finished as the No. 2 passer last year with those ridiculous stats, whereas some of the other guys are being projected on "potential," Moore seems like the no-brainer PRESEASON All-American.

What series of events would have to happen in order for Kellen Moore to actually win the Heisman? Are we talking end-of-times scenarios here or would making the national championship game be good enough?

I don't think it's impossible, but it would have to go hand in hand with another undefeated season, and probably the championship game. Increasingly, those two races have been one and the same, as evidenced by Mark Ingram's win last year.

What kind of ramifications (both in national perception and in the polls) would there be if Boise State lost to Virginia Tech? What about if they won?

There's an inordinate amount of pressure on them going into that game. The pollsters have taken an unprecedented step of raking them in the top 3/5, and if they lose, there's going to be an immediate "thanks for nothing" reaction from a lot of pollsters.

They will probably drop at least 10-12 spots, which is pretty absurd, because if any brand name team lost to another top 10 team, its fall would be less (unless it's a huge blowout). If the Broncos win, thus begins the overriding debate of the 2010 season whether they deserve to play for the title.

If Boise State and TCU both head into conference play undefeated, is there any chance that the Horned Frogs jump the Broncos like they did last year? And if so, would I be justified in never following college football again?

Ha. Sure, there's a chance, but I do think that head-to-head result from last year's Fiesta Bowl will hover over both teams.

As for the second part, after everything you endure being a Boise State fan, right up to the great MWC migration possibly backfiring, it's admirable that you keep coming out every year as it is.

Any plans on coming out to Boise this year? I'll have LOST on Blu-Ray.

The Oregon State game is a definite possibility, but I'll be in D.C. first. I'll take you up on the Lost offer. Could Boise be the Hurley of 2010? After all this time as the fun little sidekick, he finally gets his chance to ... oh right, spoiler. Sorry.

Check out more from Stewart Mandel at SI.com, if you don't mind being in close proximity to Andy Staples, and follow Mandel on Twitter, if you have any idea how that works.