Boise State wrapped up Fall Camp with a public scrimmage that the defense controlled from the outset, forcing three-and-out after three-and-out, hassling poor innocent backup quarterbacks, and generally wreaking havoc everywhere they went. Safe to say, Joe Southwick will be seeing Shea McClellin in his sleep tonight.

If you attended tonight's scrimmage, leave your thoughts and impressions in the comments. After the jump, get a look at the starting lineups for each side of the ball, find out which Bronco players sat out, and get my take on some of the most interesting things I saw on Saturday night.

The Kevan Lee spiral notebook got a serious workout, so there are plenty of notes to come. Let me explain what you're seeing below. The first-team and second-team is a list of the players as I saw them on the field when those series began. The second-team was on the field first, so chances are that some of the more frequently rotated groupings (LB, DL) got shuffled and may not be 100 percent accurate. The lineup you should read the most into is offensive line. Pretty much everyone was a go from that group.

Get to know your second-team offense

Get to know your second-team defense

Sitting this one out: A whole bunch of people

McClellin was a handful all night long, pressuring the QB from defensive end, causing a ruckus on stunts and twists, and nearly breaking Joe Southwick's arm over his head. On one of McClellin's three sacks, the junior sped around the end, flushed Southwick out of the pocket and to his left, and caught up to the backup QB just as Southwick cocked his arm to throw. The resulting smash sent the ball flying and embedded Southwick in the turf.

Joe Southwick is a gambler, Michael Coughlin is an Edward Jones financial analyst

I'm not going to make a pronouncement about the backup quarterback because there really wasn't a clear enough separation between Southwick and Coughlin at the scrimmage. If Coughlin getting first crack with the second-teamers is an indication of the depth chart, then so be it. But I imagine that we will get the week-in, week-out QB changes that Bryan Harsin hinted at this offseason.

For what it's worth, I did notice a distinct difference between the two passers at the scrimmage. Joe Southwick is a big-play, risk-taking quarterback who is not afraid to air it out and take chances. He provided the biggest gain of the night on a deep bomb to Aaron Burks who hauled the ball in along the sideline. I couldn't see Michael Coughlin attempting that pass. We fans grouse about Coughlin's garbage time performance because it is so lackluster, but I think we're mistaking lackluster for safe. Coughlin would be a solid quarterback. Southwick would be an exciting quarterback. Which one would you rather have if you were the coach?

D.J. Harper is back, alert my fantasy team

The first play of the scrimmage was a seven-yard run by D.J. Harper. It was classic Harper - decisive, quick, and powerful. He looked good in his extended time on the field, and as far as I could tell, coaches weren't holding him back at all.

The Mitch Burroughs Experience coming soon to a city near you

Burroughs earned the loudest cheers of the night when he broke loose for an 80-some-yard punt return touchdown late in the scrimmage, the first time any Bronco had been in the end zone. And then, as if on cue, Burroughs followed that up by dropping a sure TD throw from Southwick on a beautifully executed post pattern.

My first look at some new players

DE Tyrone Crawford. He is every bit as solid as people said. Wearing No. 67, I kept mistaking him for a defensive tackle, but his speed and power were definitely DE-worthy. He was in on several plays and had some pretty solid pass rush moves to boot. Watching him bull rush Charles Leno was terrifying.

SS Jeremy Ioane. The true freshman is just so fluid in his movements. He has the build of a Jerrell Gavins, except maybe a little more stocky. He didn't get the chance to display any of his killer hits, but he did make a play on one or two passes.

QB Grant Hedrick. While his offense never got much of anything going, Hedrick was quite fun to watch as he eluded the rush and stepped up to make throws. One scramble in particular was thrilling as he took off up the middle, broke to the sideline, and was pushed out of bounds 40 yards later. The play was called back for holding.

Thanks to OBNUG reader Crissie for these shots of the scrimmage. 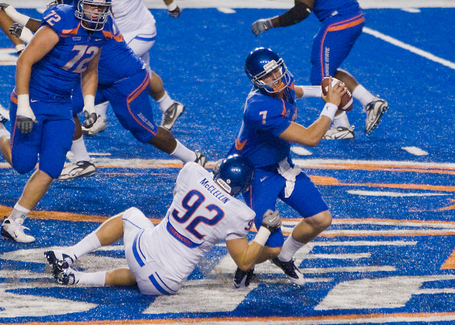 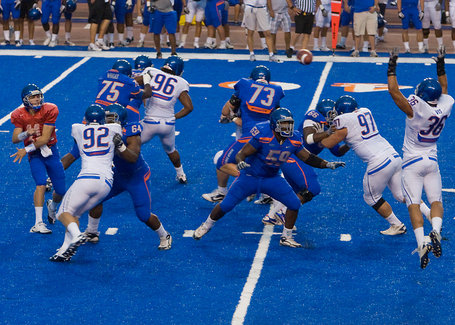 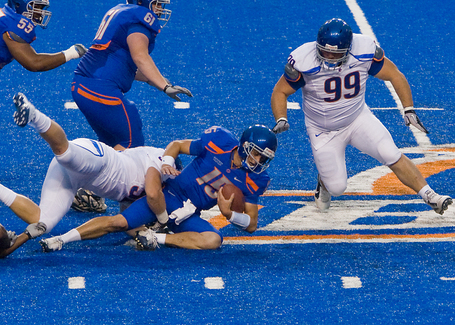 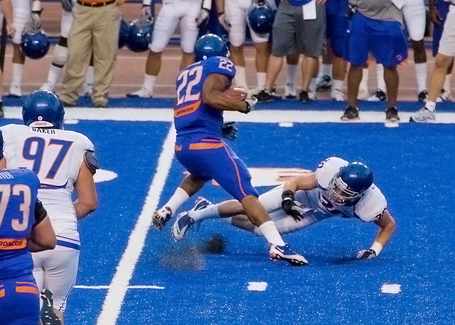 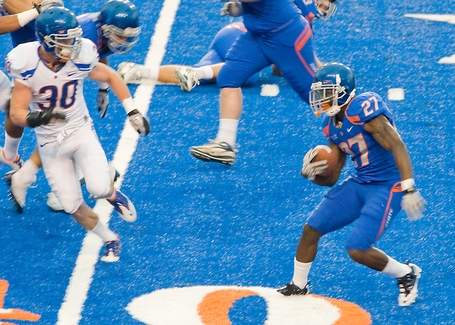 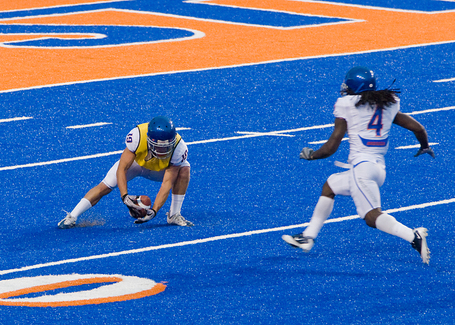