Who is Boise State's most important offensive lineman? [Season Preview]

Share All sharing options for: Who is Boise State's most important offensive lineman? [Season Preview]

Boise State's offensive line is perhaps the most important unit on the whole team, and I am not just saying that because they scare me. Is there any one player who is most important to the team's success? And are Drew and I brave enough to single him out at the risk of the other four giving us atomic wedgies?

After the jump, read through our discussion on everything O-line, and feel free to share your thoughts in the comments. If you'd rather discuss conference realignment, there's a separate post for that with some pretty solid commenting going on. But this post is all about real football. And the Gamecube.

In case you haven't heard, Boise State is going to win a national championship this year.  OBNUG's season previews are here to explain why. Today's topic: Offensive Line.

Roundtable: Who is Boise State's most important offensive lineman?

Answering this question is a little like picking a most important pre-flight safety check item. They're all important. And I'll probably ask you to go through them all twice anyway just for my piece of mind. Drew and I took on this topic with a confident flair that quickly eroded into homogenous generalities. Enjoy!

It's been said that the offensive line is the most important part of an offense. Drew said it. Dan Hawkins said it. Anyone who has ever studied the game of football has said it. And who am I to disagree with conventional wisdom? Last time I did that, I ended up with a Nintendo Gamecube.

So if you buy into the notion that the offensive line is key to the Broncos' success this season, then why not take it a step further and try to figure out which offensive lineman is the most key. Certainly, there are some good ones to choose from. Nate Potter is an NFL-worthy left tackle, playing guard. Brenel Myers is a sure-fire All-WAC player. Will Lawrence may be an actual bear. But before we get too far ahead of ourselves, I'd like to offer up an intriguing candidate for most valuable lineman: Thomas Byrd.

I'm sure you remember Byrd's 2009 season because how could you not without some serious psychological counseling. Center-QB fumbles came often enough to drive any sane man batty. Snapping alone may make Byrd the most valuable Bronco on the offensive line because if you can't get the ball from your hands, between your legs, and into Kellen Moore's money maker then you basically have last year's Hawaii game. And I don't think anyone wants that.

But I'm going to do you one better. Byrd is most valuable because he plays the line's most valuable position. Who's to say center is the most valuable O-line position? I am because I played center in high school and I am in love with myself. Centers organize the line, call out protections, audible, reach block, zone block, and with the Boise State offense they also pull and lead the way on screens. Is there anything a Boise State center doesn't do? I mean, besides snap well.

Take a former Rimington watch lister, put him in charge of the West's best line, and you have yourself a very valuable lineman. Presuming he beats Joe Kellogg for a starting spot.

First off, what was wrong with the Gamecube? Sure, the discs were tiny and hard to handle, but Luigi's Mansion was the most immersive RPG I've ever played. Now that I've made my thoughts on that clear, I feel I can now start dissecting the offensive line. Scalpel!

I think you could certainly make the argument that both tackles are going to be key to Boise State's success. Faraji Wright or Charles Leno both look legit, yet neither has got the all-valuable start at the position. On the other end, Brenel Myers looks to be the frontrunner for the job after keeping manbeast Jerry Hughes at bay in the Fiesta Bowl. Both tackle spots are up for grabs and someone who didn't start last season at that particular position will be starting at Virginia Tech. That both scares and intrigues me. Like Luigi's Mansion (now only $9.99 on Amazon.com).

Think about it. The guy who was thrust into an 11th hour position switch and got his first start in the Fiesta Bowl (Myers) will be Boise State's most experienced tackle when the Broncos suit up on Labor Day. Are we that confident in these largely unproven youngsters? Apparently the coaches are since they were awfully cavalier about sliding All-WAC tackle Nate Potter to guard.

Having said that, I certainly can't attack your logic in picking T-Byrd. He's at least the lineman with the most to prove this season, as his fall from grace in 2009 was positively Zabransky-esque. Here we had a kid who was so impressive as a freshman that he was placed on the Rimington Watch List before his sophomore season, and then over the course of 60 minutes in September looked like he'd never snapped a ball before. It was a very odd and frustrating regression that made me pay way more attention to center play than I ever cared to before. A good center isn't just consistent...he's invisible, and Thomas Byrd was as conspicuous in 2009 as a Mike Tyson face tat. 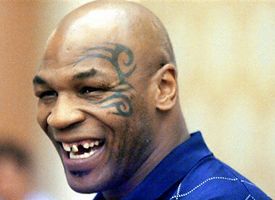 Tiger not pictured. (via a.espncdn.com)

I think that if Byrd gets his groove back, he can be a key cog on what may be the Broncos best O-line—top-to-bottom—in years, but if he doesn't definitively prove that 2009 was a terrible anomaly before Labor Day hits, the coaches have to start The Ginger Giant. Have to.

So there you have it: I disagreed with your assessment of the Gamecube, offered an alternative to your lineman pick, and then completely validated your pick.

All in a day's work, my friend.

Truth be told, there is nothing wrong with the Gamecube. It was a block of immersive awesomeness. And it had a handle. A handle, Drew! Forget what I said about conventional wisdom. Conventional wisdom never truly understood the magic of Mario Kart Double Dash, and that is just sad. That game was my closest friend in college.

Speaking of going against conventional wisdom, let's talk about the guard position since no one ever talks about the guard position. Boise State just so happens to have two of the finest in Nate Potter and Will Lawrence. What do guards do for Boise State's O? Only one of the most valuable jobs ever - keep people out of Kellen Moore's face. The worst pressure for Moore is pressure up the middle, as witnessed by the epic fail of interior blocking and throwing the ball away against LaTech . That was not good times. With that in mind, the guard position makes a pretty strong case for O-line's most valuable.

And did it really take this long for me to wax poetic about Nate Potter? Shame on me. Potter's brilliance makes him the Kyle Wilson of the offensive line, meaning that having a great player like Potter will make life easier on the rest of the Broncos' big uglies. Potter will never need a double team. He will never hang Moore or Avery or Martin or Harper out to dry. Nate Potter will lock down anything within five feet of him at all times, and that, my friend, is pretty valuable.

I'm still favoring Thomas Byrd for most important lineman, but it is hard to ignore Nate Potter.

Good. I'm glad we've resolved this silliness about the awesomeness of the Gamecube. I haven't been that upset since someone made fun of my TurboGrafx 16.

So yeah, the guards. We've already talked about the tackles and center, so we might as well hash out the importance of these fellows. Lawrence was pretty solid last season, especially for a converted DT. Unfortunately, all I can remember was his faux block on a La Tech Bulldog that led to the worst interception I've ever seen Kellen Moore throw. I can forgive that, but I can't forget. Keep your head on a swivel, Mr. Lawrence (also, sweep the leg, Mr. Lawrence). 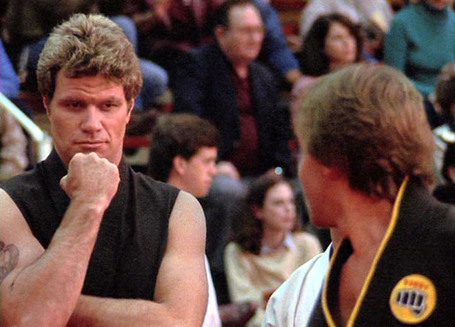 Why are we so sure that Nate Potter is going to be gangbusters? I mean the guy is huge and was an All-WAC tackle, but I'm not ready to name him an all-world guard just yet. I mean, Daryn Colledge was a heckuva tackle, but his guard days in Green Bay have been largely forgettable. I certainly hope that Potter will take to the guard position like Royce Gracie (a little MMA humor, anyone?), but we just won't find out until Labor Day.

The O-line unit should be strong...and experienced, but it's that cohesion that makes a line great. Whether or not the unit has that will determine how far the Broncos can go this season.

If cohesion is what they need, then should this be the year that Boise State eschews the merry-go-round of weekly O-line combinations? I guess that is a 3,000-word roundtable in the guise of a Sega Saturn discussion for another time.

Interesting that you are not convinced Potter will be a good guard. I guess the only actual proof I have that he will be excellent is the faith that the coaching staff has in him. If they thought he was less than spectacular, I would have hoped they would move him back to tackle before Fall Camp. Chase Baker probably hoped this, too. Since he's still a guard, I have to think he's doing something right.

So to recap our roundtable, we went from Thomas Byrd being most important to Faraji Wright and Charles Leno being most important, back to Byrd, over to Nate Potter, and finally settling on the ubiquitous "everybody." We would make excellent College Football Live analysts.

Who do you think is the most important Boise State offensive lineman? Can you pick just one? Which players will win this fall's position battles? Share your thoughts in the comments.