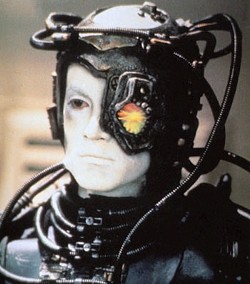 "Resistance is futile." I think that is Boise State's motto this year, too.

I think we've found our next Ia Falo. At 5'7", 170 lbs. and a demon on special teams...Borgman's similarities to Falo are almost eerie. Local walk-on of questionable size but unquestionable heart? Check. 3rd or lower on the cornerback depth chart, but a top performer on every special team imaginable? Check.

Falo is the best imaginable comparison for Borgman, and here's why: Borgman is never going to crack the 2-deep at cornerback...not with Taylor, Makinde, Gavins, Ewing, Murray, Douglas and a host of others clogging up the works, but he's already embraced another role that he can succeed in and he's no doubt relishing the opportunity. Ia Falo was never a starter for the Broncos, but his inspired special teams play was widely praised and served as a metaphor for the can-do spirit that Boise State embodies. Borgman, who won the special teams scout player of the year award as a redshirt and appeared in 12 games for the Broncos in 2009 (making 11 stops on special teams), will likely follow the same career arc as Falo—and that isn't a bad thing in the slightest. If you're looking to be inspired, watch the play of #19 this season...if not, just watch Idaho play.

For road games, Borgman likes to catch cat naps in the overhead storage compartments of the charter buses.