Does the Boise State football team have anything left to prove? [Season Preview]

Share All sharing options for: Does the Boise State football team have anything left to prove? [Season Preview]

When Boise State marches into Washington, D.C., on Labory Day night, the Broncos will be the No. 5 team in the country and a consensus national title contender with a card-carrying Heisman candidate and reigning Coach of the Year. Are there really any doubters left? Apparently, yes.

That's the topic that Nick and I tackled as we tried to pin down exactly how outsiders view Boise State. What can 2010 do for Boise State's national perception? Must the Broncos make good on all the preseason hype? Check out what Nick and I said after the jump and then add your own perspective and comments to the discussion.

In case you haven't heard, Boise State is going to win a national championship this year.  OBNUG's season previews are here to explain why. Today's topic: Intangibles.

Roundtable: Do the Broncos still have anything to prove?

The Broncos are kings inside the Treasure Valley bubble, but how are they viewed by judgy outsiders? Nick has perspective from living in the heart of SEC country. I once read Where the Red Fern Grows, and I'm pretty sure it was based in the south. Together, we try to come to a consensus on how Boise State's 2010 season could impact the team's national perception for years to come. Put on your adult thinking cap. This one's going to get deep.

I am a sucker for living in the past, which would explain why so many of my Friday nights are spent watching King of Queens and flipping through Buzz Beamer comics in the backs of old Sports Illustrated for Kids magazines. The past was awesome; I have the Pogs to prove it. 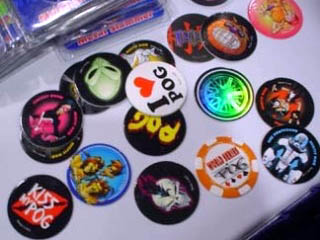 One thing that I loved so much about the past was that the Boise State football team was somewhat of a hidden secret. Not so much any more. Everyone knows about the Broncos, and worse, everybody has a take on the Broncos.

In a lot of ways, this is a great thing. Boise State football is all over the news, and I no longer have to have a My Yahoo to make it that way. But at the same time, there are more Boise State haters out there than ever before.

Am I wrong in seeing it this way?

No, I don't think that's wrong because that is the general sentiment of Boise State on the Internet. Any column that is written about Boise State will have a comment section filled with people "debating" Boise State's merits. They have become such a broken record that most comments fall into these categories:

On the other hand, the people I encounter who see me wearing a Boise State shirt are far more cordial. Mostly people tell me that they really enjoyed the Fiesta Bowl or that Boise State doesn't get the respect they deserve. This could be because I'm 6'5", but I would like to think that the smarter fans aren't the ones commenting on columns. 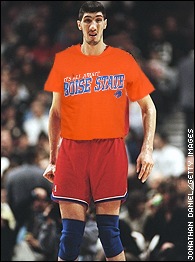 But let's take a second to imagine what an outsider's perspective would be on Boise State. They have only been Division I since 1996. Their stadium's capacity is only 33,000. They play in the WAC. And they play on a blue field!? How could they possibly be able to compete with my SEC/Big XII/Big 10/PAC 10 team? Therefore, they must be overrated.

So, what will this season do for Boise State's national reputation? Seems to me like they have everything to lose. Because if they lose a game, they will only further prove Boise State's detractors right. Something tells me that nothing Boise State does this year is going to change their minds. But maybe that's the pessimist in me that was at the Georgia game in 2005.

"Everything to lose?" That sounds like a thought that needs suppressing. I can give you some tips on that.

I'm hoping that the schism between college football fans who respect your BSU passion (possibly out of fear of your giantism) and those who turn every non-BCS article into a flame war is a little more balanced than it feels. Any time I'm on the Internet, I feel that the split is 80/20 in favor of the goons. Any time I'm at a Buffalo Wild Wings, it feels a little more 60/40, provided Mark May isn't on the air. 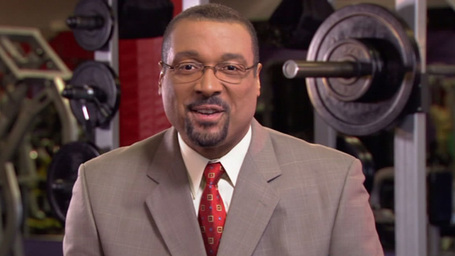 Mark May thinks free weights are overrated. Bowflex is the new USC!

With that in mind, I'd like to think that there are still a fair number of rational people out there who would appreciate and respect a Boise State national championship. If BSU were to complete the title run, they would have defeated a potential ACC champ, a potential Pac-10 champ, and either the Big Ten's best or the SEC's best (sorry, Big East, you suck wind). That has to be good enough in other people's eyes.

What is the biggest knock nationwide against the Broncos? You named several. They don't play anyone. They don't play anyone on the road. And they wouldn't last a second in SEC country. Though it shouldn't be the case, I think Boise State still has a lot to prove this season, and if a perfect season doesn't satisfy the masses, then I don't know what will.

True, I think that the majority of sports fans enjoy rooting for the underdog and Boise State has filled that role. I guess the portion of college football fans that have this feeling of entitlement (I'm looking at you, Notre Dame and SEC fans) are probably the most vocal. And that doesn't necessarily mean that they represent all of the college football fans.

Besides no amount of logic about who Boise State will beat this year makes a difference, Kevan. It's all about what have you done for me in the last 50 years. And I guess that's the part that really gets me. College football is played by a group of college kids who have 4 years to build something and win some games. Nothing outside of the current season should really matter. No one on Boise State's current roster was in Athens in 2005. Yet, they still are being measured against that game.

Do you think people still root for Boise State because they're the underdog? Or did the Broncos kind of lose out on that now that they're preseason Top 5?

And now that Boise State is able to transcend BCS rankings and be a legitimate national title contender, I think that draws the haters even further out of their ESPN message board lean-tos. Rooting for Boise State to bust the BCS is one thing. Rooting for Boise State to win a national championship takes an entire different sort of open-minded graciousness. I can't imagine I will ever meet a Florida fan who thinks Boise State is deserving of a national title. I will, however, meet a Florida fan with a Danny Wuerffel tattoo. That I can guarantee.

Am I discouraged that no amount of Boise State greatness will change the minds and hearts of a good number of CFB fans? Of course I am. But I am also a realist. College football is great because it allows for people to have wildly divergent takes on the exact same topic. Disagreement is part of the fun. Isn't that right, slow boring Big Ten teams?

Boise State's intangibles, on a scale of Paul J. Schneiders

Do you think the Boise State football team has anything to prove this year? How do you think the Broncos are perceived nationwide? Is all this hype good or bad for BSU? Share your thoughts in the comments.