Share All sharing options for: Has Kellen Moore hit a ceiling? [Season Preview]

Kellen Moore will be one of the most talked about college football players this season, thanks at least in some part to this very wordy preview post that we put together. The topic: Can Kellen Moore improve on his numbers from 2009? The wager: Will he throw more than 3 INTs this year?

Drew and I discuss after the jump, and we're counting on you to share your insight on the topic. Find out what we think on Moore's statistics, his determination, and why I probably shouldn't be comparing him to Kyle Wilson. Here we go.

In case you haven't heard, Boise State is going to win a national championship this year.  OBNUG's season previews are here to explain why. Today: Quarterbacks.

When we look back on the 2010 Boise State football season while wearing our "Boise State football 2010 national champion" T-shirts and sipping from our replica Sears Trophy 7up coozie, we will not have a hard time judging Kellen Moore's success. Others might, though.

After putting together one of the greatest seasons in BSU QB history in 2009, where does Kellen Moore go from here? And will anything less than absolute perfection be perceived as a letdown? Drew and I discuss this topic under guise of "Will KM throw more than 3 INTs in 2010," and at least one of us makes some pretty good points.

Kellen Moore makes me want to be a better person because, unlike me, he is never satisfied with the status quo. I happen to like the status quo very much. It is safe and rarely requires me to leave my bubble. But leave it to Kellen Moore and his godlike command of a football to make me and the quo look bad.

And now his sophomore stats:

If Kellen Moore is to improve statistically from his first two seasons, his 2010 numbers would have to look something like this:

Kellen Moore has raised the bar so high that continuing to top it is getting more and more extreme. I don't doubt his qualities as a college quarterback, but at what point does Moore's career return to some sort of human being level? In some sense, I wonder if he is due a Jared Zabransky regression so that he can really wow everyone when his senior season comes around. In another sense, I am an idiot and forget I even said that last sentence.

Of course, maybe I'm overthinking this. Kellen Moore can still be a better player in 2010 than he was in 2009 even if the stats don't show it, right? ... Right?

Help me out here.

Kellen Moore can and will keep improving because that's the type of guy he is. Beneath his "aw shucks" exterior lies a fierce, fierce competitor. Regardless of what time it is when you're reading this article, it is a safe bet that Kellen Moore is somewhere watching film. Not avant garde French cinema at the Flicks...honest-to-goodness game footage. That is precisely why Kellen won't be hopelessly overthrowing Titus Young fade routes in 2010, and he won't be lazily floating balls to the sideline off his backfoot like he did last year in Ruston, Louisiana. Kellen may not be the swiftest QB out there or possess mythical Jeff George-like arm strength, but he makes his reads faster than a kid that's one Book It! sticker away from a personal pan pizza and he has more pocket awareness than the guy that invented cargo pants.

That said, I don't think Kellen's better-ness will equate to that much better stats than 2009. His TD/INT ratio got pretty silly last season, but I think that's because he maximized the scoring opportunities and took more calculated risks in 2009 than he did in 2008. I mean, no one would argue that Kellen wasn't a much more dangerous QB in 2009 than in his freshman campaign, but look at his statistical charts...they're virtually identical. 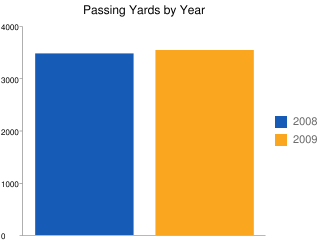 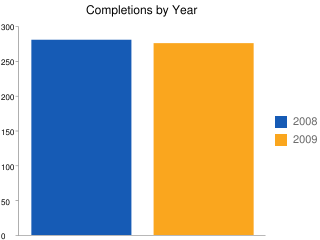 Kellen had roughly the same amount of completions and the same amount of yardage, but there was a pretty big disparity in number of TDs and INTs. So, I think it is reasonable to assume (especially considering Boise State's 55/45 run-to-pass ratio) that Kellen will throw roughly the same number of passes in 2010 that he did in 2008 and 2009 and he'll probably have about the same number of completions and passing yards. They'll creep up slightly because I think he'll develop more touch on the deep ball, but those stats'll remain in the same neighborhood. Boise State won't be down in enough games in 2010 to need to go to the air, and if their 3rd down conversion rate creeps up to more Boise State-like levels, that won't require more passing downs either.

So, where I land on the whole issue is that Kellen will indeed be better in 2010 in that he'll tighten up his game and clean up his perceived weaknesses, but I don't think it will translate into vastly different stats. His completion percentage in 2009 actually was down from 2008, but he threw more TDs, for more yards and less interceptions. In 2010 we'll see Kellsy throw for slightly more yards with a slightly better completion percentage, but with slightly more interceptions as well. 3 INTs or fewer is too much to ask, especially considering the step-up in competition. However, I'd bet house money he'll have no more than 6.

Can't really argue with anything there. But I can argue with THIS: Kyle Wilson circa 2009.

Wilson was coming off a sensational couple of years, was the team's most hyped player, and earned a reputation as one of the hardest workers to ever come through the Boise State program. But can you honestly say that his 2009 was better than his 2008? I can't. Compared to his junior year, he missed more tackles, had more penalties, and was far less of a factor in the kicking game. I defy you to find someone who would say otherwise and, no, you cannot ask the Kyle Wilson motorhome. 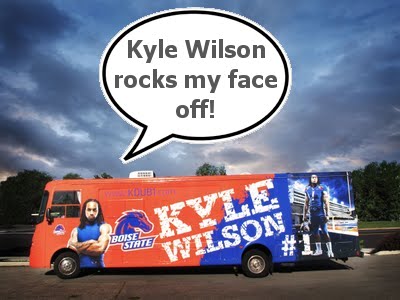 There are at least two points to take from this:

Like you said, Drew, a straight up stat comparison does not always tell the whole story. Better players can have worse seasons for a number of different reasons. So no, I am not 100 percent proof positive that KW's 09 was worse than his 08.

But as far as comparing Wilson to Moore? You bet I think it's fair. That is the only leg my argument has to stand on.

We don't know how Moore will react to the pressure of being a Heisman contender. We don't know how he will do as the center of a hype sandwich. We don't know to what lengths defenses will go in order to make sure he doesn't beat them. I only ask that you acknowledge the possibility that Moore could take a step back this season. And once you've acknowledged it, you can throw it out the window because it probably won't happen.

I thought we were debating whether or not Kellen Moore would throw more than 3 INTs in 2010—a point which I already conceded, even though it made me throw up a little bit in my mouth. Plax™ to the rescue! 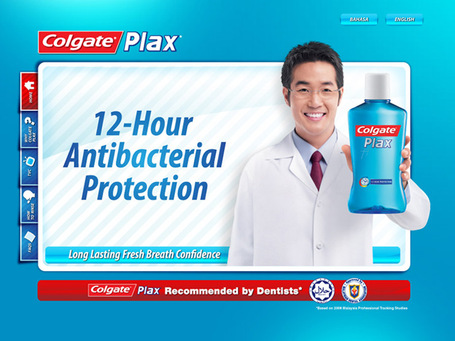 Doctor's hand not to scale. (via www.colgate.com.my)

Now, since the argument has morphed into a Kellen Moore/Kyle Wilson comparison, I will say this: no way can Kellen Moore grow better dreadlocks than Kyle Wilson...on that point I will not budge. Actually making the Kyle Wilson/Kellen Moore comparison is a little like comparing apples and Kellen Moores. Kyle Wilson's 2009 was worse than 2008 because teams didn't throw to his side of the field and did those crazy shield kicks to limit his punt returns. The penalties were a result of what I like to call "Scandrickitis," which is an affliction that mainly seizes DBs and causes them to get overly aggressive because they aren't tested often enough. Kyle Wilson also came up HUGE in the biggest game of the year.

Kellen is a now a known quantity, like Wilson was, but what are teams going to do about it...more aggressively try to intercept his perfectly placed passes? Try to sack him more? I would argue that teams knew more what to expect from Kellen in 2009 and actively tried to create schemes to limit his damage—all Kellen did was throw more TDs, less INTs, and take fewer sacks. It's for that reason alone that I think Kellen will be better in 2010 (though as we discussed earlier, the stats might not always show it)...he's already had the kitchen sink thrown at him and came up aces...what else do they have to throw?

Let's say, just for the sake of argument, that Kellen "screwed up," 20 times last season (just throwing out a number)...Ok, now break it down thusly: 3 INTs, 10 overthrown passes, 7 missed open receivers. So, we know by Kellen's nature that those 20 screw ups will eat away at him because he's a perfectionist and a little bit of a freak.

Now let's say that he works out more kinks and gets his "screw up" total down to 15 in 2010...that's an improvement, but it could still mete out like this: 5 INTs (higher), 5 overthrown passes (lower), 5 missed open receivers (lower). So...really what I'm saying is that picking out one stat doesn't make a year better or worse—case-in-point: Kellen's completion percentage was worse in 2009 than it was in 2008. You have to look at the sum-total rather than the parts when determining whether Kellen's 2010 will be a "better" year. I still contend it will be—but one or two parts of the equation are bound to be worse.

Fair enough. I think I will save my Kellen Moore - Albert Haynesworth comparison for another time. 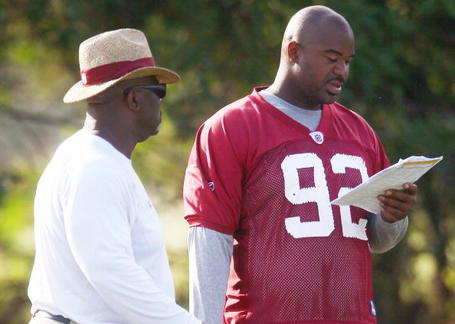 Getting back on sort-of-topic, I agree that Moore will throw 3-plus interceptions this fall. When you think about it, none of his picks last season came from deflections, tipped passes, or big hits, which typically account for at least two or three INTs per quarterback per year. It's a miracle nothing bounced off of Mitch Burroughs' mittens and into the waiting arms of a defender.

What worries me is that Moore's numbers may or may not be better despite the fact that he is improving as a quarterback, and if his numbers are worse, I can see opposing fans, media, and especially Mark May tearing down Moore because of it. Good-bye, Heisman. Good-bye, first team All-America. People can be ignorant, and it seems like the ignorant ones are the ones who talk the loudest. Hence, Idaho Sports Talk.

I guess we're going to have to come up with some sort of massive spin control if that happens. I'll get my Microsoft Publisher dusted off.

The state of Boise State's quarterback position, on a scale of Paul J. Schneiders

How do you think Kellen Moore's 2010 season will be perceived? Think he will throw for more than 3 INTs? Think he sort of resembles Kyle Wilson if Kyle Wilson went to Super Cuts? Share your thoughts in the comments.