We've got 59 days until kickoff...so today we'll be taking a look at #59 on the Boise State roster—Will Lawrence

Lawrence was a jack-of-all-trades at CH Flowers High School in Maryland, lettering in basketball, track and field, and wrestling aside from football. As a senior, Lawrence was named to the Prince George All-Star football team and earned first-team all-county, all-league and honorable mention all-state honors after finishing the season with 90 tackles (7 for loss), 16 sacks, two forced fumbles, a safety, and a pass breakup as a defensive end. Also a member of the National Honor Society, Lawrence had one other offer from James Madison (who I'd thought had been dead all this time) on top of his offer from the Broncos. 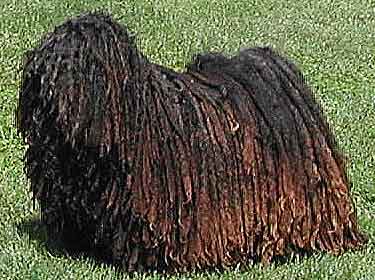 Started 13 games for Boise State at guard in 2009. Part of unit that allowed fewest sacks (5) in the country.

Having facemask inextricably stuck to Nevada player's for 17 agonizing minutes. 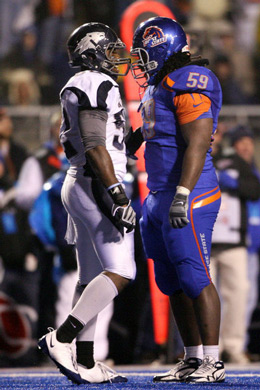 Remember a few weeks ago when I whitewashed the right guard battle to make it look neck-and-neck between Will Lawrence and Spencer Gerke? Yeah, that was actually a bit of what we call 'hyperbole'. Now, I'm not saying that Gerke won't be a fine player in his own right, but Lawrence played very well last year for the Broncos and, though he'll be pushed by Gerke in the Fall, he should retain his starting gig. The other reason I had Lawrence and Gerke as close as I did is because Lawrence will be moving from left guard (where he played in 2009) to right guard, and I assume there is at least a small learning curve.

Lawrence's first few years with the Broncos were spent on the defensive side of the line-of-scrimmage, but after languishing there a bit (2 game appearances in 2007, one tackle), the decision was made to convert him to an offensive guard. Lawrence bulked up, studied up, and played 2008 as a reserve and in 2009 really flourished once the dust settled on the O-line. Lawrence, now with his first full season of solid PT, should be even more of a force for the Broncos in 2010...helping protect Kellsy's blind side and hopefully paving the way for at least a pair of 1,000 yard rushers.