Share All sharing options for: Get your hopes up with the 2010 Oregon State Beavers [Team Preview]

Virginia Tech gets all the attention on Boise State's schedule, but the Oregon State game could be just as challenging for the Broncos. After the jump, find out what the Beavers have been up to this offseason and how they might fare in the Pac-10 this fall, and weigh in with your thoughts in the comments.

In a nutshell: Oregon State is stacked everywhere except the place it matters most: quarterback. If Mike Riley can find a way to minimize a new QB's impact, the Beavers could find themselves in the Rose Bow and electric RB Jacquizz Rodgers could be on the Heisman short list.

To get you ready for the season, OBNUG is previewing each team on Boise State's schedule, even the WAC ones. Today: Oregon State.

Oregon State was thisclose to a Rose Bowl appearance. Instead, they ended up with the opposite of a Rose Bowl appearance - a 24-point loss to BYU in the Las Vegas Bowl. After dropping games to Cincinnati and Arizona early in the year, the Beavers went on a four-game run through the Pac-10 that ended with a four-point loss to Oregon in the Civil War. At that point, who really cares about a Las Vegas Bowl? I mean, besides Max Hall. 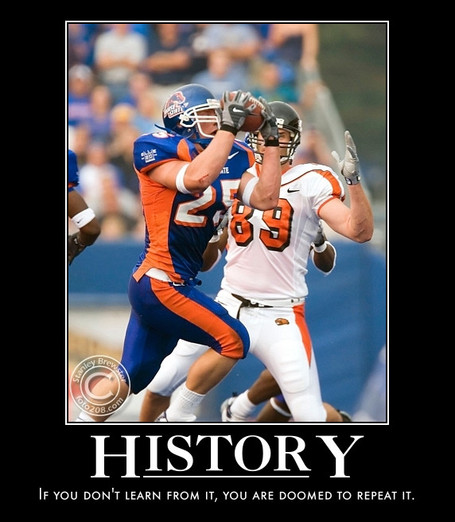 You know what scares me about the Oregon State Beavers? Mike Riley. Or rather the emanating magnificence of Mike Riley. I get the feeling that you could give Riley a sack of gerbils, and he would find a way to get them to a Pac-10 bowl game. At the very least, he would beat Washington State.

Riley is the reason why OSU is consistently one of the Pac-10's best programs. While he always seems to lack just that extra little something to get to the very top of the conference, his teams always find a way to exceed expectations. Will this year's team be any different? Actually maybe, but only because there may be no room to exceed expectations this season. This time, Oregon State is good enough to be a preseason Pac-10 favorite.

And for good reason. They have the Pac-10's best running back, its best defensive player, and its best coach. Plus, Oregon is in shambles, and USC has way too much Lane Kiffin.

Oregon State is poised to make a big splash in 2010. The only thing standing in their way is a complete lack of QB experience. Quick, get Mike Riley a gerbil!

If Oregon State was a summer movie 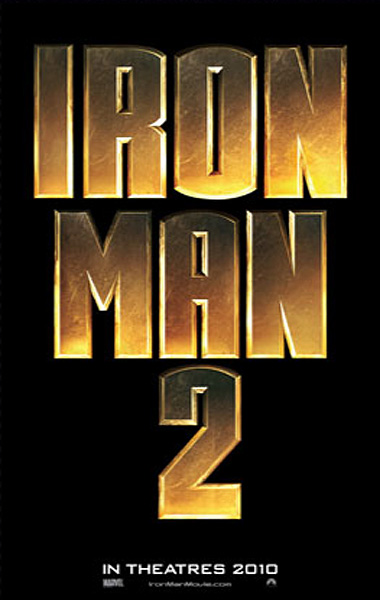 The five most important questions facing the Oregon State Beavers

No. 1: Who is going to play quarterback? Please tell me it's not that Lyle Moevao guy. I swear he's at least 30.

Moevao is gone, a victim of the NCAA's pesky rule that you can't play until you are eligible for social security. Last year's starter, Sean Canfield, is out, too. For awhile that left Ryan Katz and Peter Lalich to duke it out for the starting role, but Lalich went and got himself booted off the team. Katz by default wouldn't be the end of the world for the Beavers, especially since the bulk of his duties will be handing off to Jacquizz Rodgers and throwing short safe routes to James Rodgers. Katz did throw 27 passes last year, and I heard that at least a quarter of them were good. If he is the starter in 2010, he will have a lot of pressure to perform, but at least he'll have the skill players around to make life a little easier.

No. 2: What if I enjoy the Oregon State - Boise State game so much that I want to do it again?

Well, you might be in luck. The Broncos could be headed to the Rose Bowl if they get bumped form the NC game, and hey, so could the Beavers if they wind up as Pac-10 champs (someone correct me if I have my BCS bowl rules wrong). How likely is Oregon State to win the Pac-10? A lot more likely than you might think.

First, as mentioned above, Oregon and USC are kind of in a bad place. Second, the Beavers get five conference home games in the round-robin Pac-10. And third, both Oregon and USC have to come to Corvallis to play.

No. 3: Is Jacquizz Rodgers the best running back in the country? I mean, besides Doug Harper.

Funny you should mention that. He is certainly one of the best among a group that just so happens to include another one or two backs that the Broncos will face this season, like VaTech's Ryan Williams. Guys like reigning Heisman winner Mark Ingram and Pitt's Dion Lewis would probably win a poll for country's best, but Rodgers is definitely no slouch. He is 5 feet, 7 inches of elusiveness and power. For comparison, Chris Ault is 5 feet, 7 inches of analness and Napoleon complex.

No. 4: What is the least believable Oregon State player story of the offseason?

My personal favorite is DL Brennan Olander and friends' stolen golf cart joy ride that nearly cost Olander his spot on the team. Not to be outdone, Lalich got booted for a boat DUI.

It wasn't all embarrasing leisure activities for the Beavers this offseason, though. Two players left the team to either be with family or join the military. I guess military service and familial love cancel out drunken bad decisions.

No. 5: Does Oregon State have a weakness? Besides golf course equipment?

The linebacker corps grew awfully thin this offseason with the departure of David Pa'aluhi and an injury to Keith Pankey. Story is that Pankey's ruptured Achilles will be healed in time for the season, but don't hold your breath, Keith Pankey fans. A couple of sophomores are likely to replace Pa'aluhi, and a third sophomore is ready and waiting if Pankey isn't ready to go. Yikes, sophomores.

What other people think of the Beavers 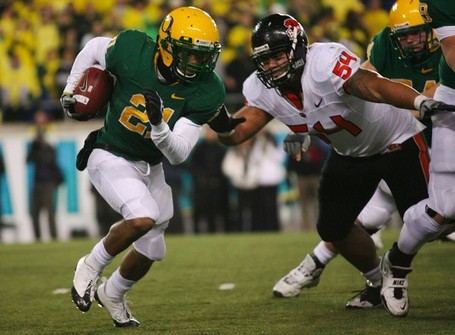 OSU's best player is actually RB Jacquizz Rodgers, but you already knew that. Hopefully you knew about Paea, too, because he is really good. Like Billy Winn good.

He is the best defensive player in the Pac-10 and will be a surefire first round pick come April. He absorbs blockers and controls the line of scrimmage with no sweat. He will be a handful for the Broncos' interior line and everyone else's interior line for that matter.

The Beavers play the sixth toughest schedule in all of college football thanks to roadies at two of the non-BCS's best teams.

I do not like thinking about this game because I get scared too easily. Just keep reminding me about Korey Hall interceptions if you see me pacing nervously on the streets of downtown Boise.

Absolutely. The Beavers should be one of the Pac-10's best teams, so you can expect a similar bump like the one the Broncos got from beating Oregon last season. In fact, the similarities are striking: early season game at Bronco Stadium, a Pac-10 consensus Top Three team. Just keep the postgame punching to a minimum. I don't think that helped last year.

The one-year-old is obviously a USC fan.

Ryan Katz or whoever manages not to screw everything up, Oregon State sails through the Pac-10 schedule, secures a Rose Bowl berth.

Ryan Katz screws everything up, the Beavers lose way more Pac-10 games than they should, a bowl game almost doesn't happen for them.

What do you make of the 2010 Oregon State Beavers? Will they be more of a threat than Virginia Tech? Do you see them winning the Pac-10? Share your thoughts in the comments.