We've got 61 days until kickoff...so today we'll take a look at #61 on the Boise State roster—Joe Kellogg

Kellogg was only a two-year letterman at Saguaro High School, but man, did he make the most of it. As a junior, Big Joe helped his team to a state championship and a 13-1 record, then followed that up with a 14-0 run (sound familiar?) that ended in another state championship. His senior season garnered him a slew of honors as well, as he was named first-team all-state and All-4A-1 Desert Sky Region. Then he was named to the Arizona Interscholastic Association 4A-1 All-State first team, the Arizona Republic All-Arizona team, the Coaches All-State first team, the All-Tribune first team, the Desert Sky Region first team, the Arizona Varsity/Rivals.com 4A-1 All-State squad, and the Scout.com 4A-1 All-State team. I'd list the other teams that he was named to (yes, there were more), but I want to be able to finish this article without my carpal tunnel flaring up. Despite Kellogg's impressive number of awards, he was only rated a 2-star recruit by Scout.com and Rivals.com—which may be one reason that Boise State, who scoffs at the star rating system, was the only school to offer Kellogg even after he'd attended camps at Arizona, Arizona State, and Colorado.

Crossing my fingers that this one catches on. 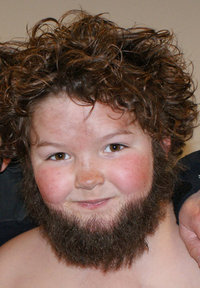 Honored with city of Scottsdale's City Athlete Award while at Saguaro High. Also won National Football Foundation Scholar-Athlete Award and Victory of Honor Award. Played in 10 games in 2009 for the Broncos, with one start (against Tulsa).

Ate this whole thing of Everlasting Gobstoppers before realizing they were ball bearings.

Kellogg could feasibly line up at guard or center this season, but if Spring Camp is any indicator, he'll likely be backing up Thomas Byrd this Fall. With Byrd out for much of the Spring, Kellogg shifted over from his usual guard position and in no time, had actually passed Byrd's primary backup, Bronson Durrant, on the depth chart. Getting past Byrd will be a different story altogether, but it's good to know that Kellogg has the versatility to play different positions along the line if called upon. Kellogg's one start in 2009 came at guard, and I still think he'd have an easier path to playing time at that position as Byrd seems more deeply entrenched at center than probably any of the guard candidates, but Byrd was inconsistent last year and a spate of wobbly scrimmages or starts could have Kellogg right in the thick of it. Kellogg/Byrd may actually be one of the better position battles to watch this Fall as Byrd is coming off a bit of a "so-so"year in 2009 and an injury-plagued Spring. Whether Bronson Durrant can make a late push and regain his lost ground from Kellogg will also be of interest. My not-so-bold prediction is that Kellogg will stay at center for 2010 even if the Broncos suffer injuries to the starting guards. Kellogg played well this Spring at the position and I think he'll be a valuable safety net for the Broncos should Byrd regress or need a breather.

When Kellogg turns 30, he will become the acting CEO of Kellogg's cereal. His first order of business? 3 scoops of raisins in Kellogg's Raisin Bran®