Where I come from: Tailgating traditions

Share All sharing options for: Where I come from: Tailgating traditions

This post is sponsored by EA Sports NCAA Football 2011.

One of college football's best traditions is tailgating, right up there with marching bands during halftime and the BCS screwing the pooch. Tailgating brings out the best in fans - whether it be a parking lot party or a neighborhood get together or you cooking Bagel Bites while your wife steals away the last seconds of wife TV time.

What tailgating story do you have to share? After the jump, I cook up a couple of tales about my tailgating experiences, and then it's all open to you. Tailgating is an appropriate stop on our Where I Come From week of storytelling, don't you think? Food, friends, football. All sorts of F words, and none of the bad ones. F words and more, after the jump.

I'll be honest. I don't have a lot of tailgating stories to share. My Bronco fan experience typically involves me heading down to the stadium as early as possible to get to my seat so I can watch teams warm up. I love me some calisthenics. That said, I do have a couple of tailgating memories that stand out more than the rest.

The first took place more Human Bowls ago than I care to look up. I think it was Iowa State versus Boise State, but I don't remember myself being in full body paint, so I can't be sure. At any rate, some friends and I headed down early for the game because we wanted to do our bowl experience up right with some tailgating.

Except this wasn't any sort of normal tailgating. With the Human Bowl being the Human Bowl, kickoff was at 10:00-ish in the morning. We were going to tailgate our breakfast. We made a couple of mistakes that morning. First, we parked in a neighborhood, right outside someone's house. This was not prime tailgating space, and probably a little illegal to have an open flame so close to a wooden mailbox. Second, we thought we could whip up a healthy, edible breakfast in 15 minutes despite never having used a grill under tight time restraints and having to cook eggs and hashbrowns.

It did not turn out well. We ended up tossing most of the undercooked breakfast on the ground under the car and then went on to pound the concession stand pretty hard once we got in the stadium. But oh, the thought of those frozen hashbrowns, scrambled eggs, and the sausage we forgot ... yummy.

My second memory is of a slightly more tasty tailgating experience. Nick and I were headed down to a game, and being the poor time managers that we were, we didn't leave ourselves much time to get our face paint on, find parking, and chow down. The solution: Carl's Jr. We tailgated to our heart's content with Famous Stars and dollar chicken sandwiches. They were delicious, despite the fact that they looked disgusting from sitting in our cargo pants pockets for quite some time. 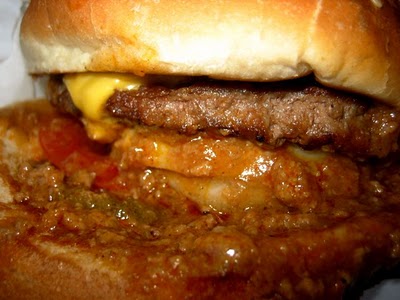 Now featuring fewer years on your life. (via 2.bp.blogspot.com)

Mmm, those were some good eats - probably because we were starving and our tastebud receptors were compromised thanks to our brain's demand for more blood to dream up ways to get Heather Cox to look at us.

But it sure beat soggy, undercooked breakfast in a stranger's front yard.