Since Brenel is in limbo between guard and tackle, I thought I'd merge the two positions until a resolution is met. Besides, it sounds a lot better than "Tuard"/ˈkɜr 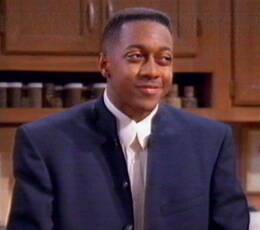 Started two games in 2009 for the Broncos—against UC Davis and against TCU in the 2010 Fiesta Bowl.

Vote of little to no confidence given by the media prior to his start in the Fiesta Bowl. Like here, for example.

Myers endured somewhat of a trial-by-fire in last year's Fiesta Bowl. Subbing for an injured Garrett Pendergast, Myers, who'd started one other game—at guard, was thrust into the starting lineup at right tackle against the nation's best defensive end, Jerry Hughes. All Myers did was hold Hughes to a paltry 4 tackles, 0 sacks, and a pass deflection. So the question in 2010 becomes: where does Brenel Myers fit on the Bronco O-line? He showed his versatility by playing tackle...and showed he can handle the strength and speed that top defensive ends will possess. He's also showed that guard is a viable part of his repertoire, grabbing a start (albeit against UC Davis) at the position as a redshirt frosh in 2009. Not surprisingly, Myers played tackle for much of the Spring, owing largely to his stellar performance in the Fiesta Bowl, but Myers is ready to play either position, and his versatility will help the Broncos when the inevitable shuffles begin this Fall. This Spring, Myers didn't really tip his hand as to where he'll land, but he obviously feels a level of comfort wherever lines up.

I feel comfortable at guard and tackle," Brenel said "It doesn’t matter to me. You want to know the whole offensive line, all the positions, but you also want to be at the position that best fits you.

Currently, I'd say the position that fits him best is right tackle. I also see him having less difficulty keeping Pendergast and Ames at bay this Fall than Will Lawrence or Spencer Gerke at guard. My money is on Myers being the week 1 starter at tackle and with another good outing, cementing the starting gig for the remainder of the year.

Brenel looks so menacing in his broncosports.com portrait because as his picture was being taken, he spotted Michael Atkinson taking the last 5th Avenue bar from his backpack,