New Carr smell: Will Fresno have a new QB to pin their hopes and dreams on in 2010? [Team Preview]

Share All sharing options for: New Carr smell: Will Fresno have a new QB to pin their hopes and dreams on in 2010? [Team Preview]

There was a time when Fresno State was the scourge of the non-BCS landscape. Pat Hill's mustache would take no prisoners and his "anyone, anywhere, anytime" mantra was quoted about 30 times during every broadcast. As Mike LaFontaine would say: Wha' Happened? Boise State...that's what happened. After Boise State abruptly ended Fresno State's star turn in 2001, they've been struggling mightily to locate their lost mojo. Their scheduling philosophy hasn't changed, but they aren't getting meaningful wins over the big boys anymore and some (read: everyone) are starting to wonder whether Pat Hill's still got it.

In a nutshell: Let's face it. Fresno State's biggest win in years was their 2005 loss to USC. Since then, the Bulldogs haven't even had a good grasp on second place in the WAC. Now, with a bit of a rebuilding year facing the squad, can Pat Hill pull out more mustache magic or will it be another disappointing year in 2010? Let's discuss.

To get you ready for the season, OBNUG is previewing each team on Boise State's schedule, even the WAC ones. Today: Fresno State.

After blanking UC-Davis in their opener 51-0, Fresno State proceeded to drop the next three contests in heartbreaking fashion—snatching defeat from the jaws of victory at Wisconsin, and then putting up valiant efforts against two ranked opponents, Boise State and Cincinnati, before ultimately falling short. So, what's the best way to rebound from a 1-3 start? Start playing the rest of the WAC schedule. Fresno ended up at 6-3 after playing their next 5 games, then stumbled badly, getting a shellacking in Reno, before finishing their regular season on a high note by beating Illinois of the Big Ten in an epic 53-52 scorefest (I didn't check, but I think 52 points is the most points scored by a Big Ten team in 35 years). Unfortunately for Fresno, Pat Hill still had an extra heartbreak for the squad that he'd been saving in his mustache, and the Bulldogs their second-straight bowl game to a MWC opponent—a double-OT loss to Wyoming in the Papa Murphy's Take-and-Bake brought to you by Coca-Cola Classic Bowl. Another 8-5 season, another perp walk back to Fresno.

In the preseason, I showed much less concern about Fresno State than I did the entire 3rd quarter the game when we finally played them. I don't take back-to-back-to-back running back pwnage well.

I'm finished wringing my hands about Fresno...they implode year in and year out, and with no QB to speak of, I find it hard to believe they will even win their usual spate of OOC games. Ryan Mathews is a good back, but as far as I can tell, he suffers from that same disease that Samuel L. Jackson had in Unbreakable. Fresno will be lucky to finish 4th this year, although not having the crushing weight of high expectations on them this year might cause them to overachieve...but I'm not holding my breath.

Well, they kinda found a quarterback in Ryan Colburn, but it's the other Ryan I was wrong to be so cavalier about. Ryan Mathews, to put it mildly, drank Boise State's milkshake last year. I am not sad to see him go. 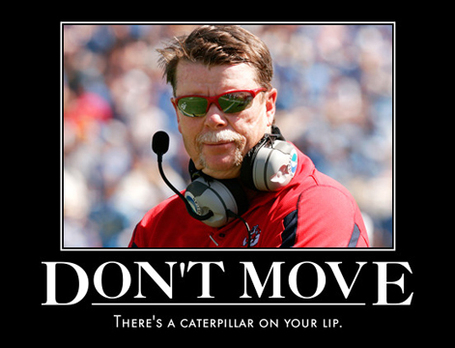 Most Boise State fans have a lot of respect for Fresno State. They have a colorful, straightforward coach...they play tough, hard-nosed football, and they have those cool green "V"s on the back of their helmets (it stands for "velociraptor, if you were wondering). What's not to like? Well, for starters, Fresno State is the one team that could consistently bolster Boise State's flagging S.O.S. but consistently crap the bed in conference and make our annual beating of the bulldogs into little more than a footnote. Is it too much to ask that you guys start pulling a little weight when it comes to propping up Boise State's schedule strength? We've given up on New Mexico State and San José...but you used to be different. How about this season you guys beat Cincy and Ole Miss before you come into Bronco Stadium and roll over, savvy?

If Fresno State was a summer movie

Knight and Day is a perfect analogy about the difference between Fresno State's expectations vs. their output. 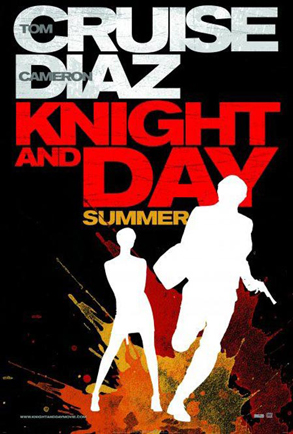 The five most important questions facing the Fresno State Bulldogs

I sure hope so...and not just because I feared for Colburn's very life in last year's Boise State-Fresno State game. I want to see if Derek Carr can back up his big talk with big play. Carr was allowed mop-up duty last season as a true-frosh, and attempted 14 passes—completing 10 of them (71%). The kid's got moxie and looks like he might be the real deal. It would be a shame if he didn't get a crack at Boise State before they head to greener pastures, especially after saying the following:

I want to beat Boise," Carr said. "I want to win a WAC championship and win a BCS game, but we first have to beat Boise to win the WAC.

Aw, how cute...he wants to avenge his brother. I for one hope that the Inigo Montoya of Fresno gets his shot.

That sucking sound you hear is the gaping, Ryan Mathews-shaped void in the Bulldog backfield. Mathews, who left school early and was rewarded with first-rounder money, was at times all the offense Fresno State could muster in 2009 as they asked him to tote the rock an amazing 276 times. Matthews repaid the favor by rushing for over 1,800 yards and 19 TDs (and that was just against Boise State /burn). To make matters worser for the run-first, run-second Bulldog offense, they also lose Mathews' wing-men Lonyae Miller and Anthony Harding to graduation and their speed-option QB Ebahn Feathers decided to transfer. So, the hopes and dreams of the Fresno State run game could rest squarely on the shoulders of 5'7" Robbie Rouse, who was the Bulldogs second-leading rusher in 2009. Rouse is a shifty lil' playmaker in the mold of Boise State's Jeremy Avery. He's certainly dangerous...but he shan't be rushing the ball nearly 300 times in 2010. Some other RBs will need to step up or Pat Hill may be forced to change his archaic game plan.

Will the offense get shaken up?

With Pat Hill running things? I doubt it. The Rushin' Bulldogs ran the ball 555 times last season and passed the ball only 321 times. That is not a balanced offense, but it really hasn't been since Pat Hill brought his special brand of boring smash-mouth football to the WAC. Look no further than our beloved Broncos to see what a balanced offense looks like. In 14 games last season, the Broncos had a 458/508 pass-to-run ratio. With the loss of Ryan Mathews, you'd think the Bulldogs would be forced to take a more centrist tack with the playcalling. Of course, they lose Seyi Ajirotutu and Chastin West from the WR corps, so they'll need some wide outs to step things up as well, but it's hard to imagine the Bulldog offense not taking a step back in 2010 with the losses they've suffered and the schemes anything but "plug and play".

How swiss cheesy will the defense be in 2010?

Fresno State better become seriously lactose intolerant in 2010 because that soup strainer that they call a defense has been horrible against the run of late. Horrible. The Bulldogs ranked 111th in the nation last season in stopping the run and surrendered 215 yards a game and nearly 3,000 yards to their 12 opponents. The only saving grace for the Bulldogs was a semi-good pass defense that ranked 32nd in the nation, but could not create turnovers to save their lives. Even arguably the best cornerback on the roster, A.J. Jefferson, had ZERO career INTs and he's since graduated. Fresno have a good linebacking unit and the D-line can play well, at times. They'll have to improve against the run by leaps and bounds and start getting takeaways or 2010 is going to be a LONG year.

Any newbs gonna step up?

SAM 'backer Travis Brown might be a very good one to watch. The true sophomore LB is the son of former Boise State linebacker and Fresno State D-coordinator Dan Brown. Dan sadly lost his battle with brain cancer last year, but his son Travis will continue the Brown legacy for the Bulldogs. Travis was a 4-star recruit for the 'dogs out of Fresno's Clovis West High School and the 11th rated player at his position when he signed on to play with the squad. Travis was a veritable tackling machine at CWHS, where he made 465(!) tackles over the course of his sophomore, junior, and senior years. If Travis can find his groove with the D in 2010, he and MLB Ben Jacobs will make quite a pair.

What other people think of the Bulldogs 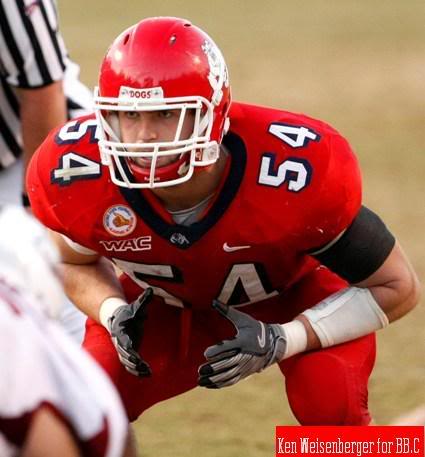 Ironically, Jacobs is on Team Edward

Jacobs was THE defense for the Bulldogs in 2009, registering 106 tackles on the year. No other Bulldog defender had more than 65 tackles last season, so Jacobs is far and away the bright spot for the D. Jacobs may want to tutor some of his mates on the finer points of tackling, because if he can get the others up-to-snuff, the Bulldog D might not be quite so anemic.

Last time the Bulldogs played at Bronco Stadium, they went home with a 61-10 loss. I think Fresno might be more game this year and a lot more Brandstater-less. I think it'll be close til halftime and then Doug Martin will start trucking worn out linebackers.

A bit. Fresno is always good for 6 conference wins and should represent another bowl-eligible team on the Bronco schedule. They could really scratch Boise State's back if they notched wins over Cincinnati or Ole Miss. Sorry, we're not going to return the favor and scratch Pat Hill's.

I think you got into some tainted milk, baby.

Ryan Colburn turns colossus, shakes off the loss of star running backs and wide receivers and goes 7-1 in conference and wins 3 out of 4 OOC games.

The spectre of a Ryan Mathews-less season weighs heavy on the Bulldog squad and they limp to an 0-3 start. 3 more losses in early November put the team in do-or-die mode to become bowl eligible.

Can the Bulldogs make do without Ryan Mathews? Will Derek Carr get a chance to eat his tasty, tasty words? Will they have what it takes to ruin the Broncos' season?