Share All sharing options for: The 2010 Nevada Wolf Pack have expectations to not meet [Team Preview]

Nevada occupies the shadowy space behind Boise State and TCU as one of the non-BCS's best. At least, that's what my Phil Steele wants me to believe.

After the jump, find out what Nevada has been working on this offseason and discuss whether or not this year the Wolf Pack will make true on all their preseason promise. Can the defense stop anyone? Can Colin Kaepernick learn to throw with touch? Let's discuss.

In a nutshell: The Nevada Wolf Pack are either a Top 25 team on the cusp of greatness or an 8-5 team that just lost to Utah State. Determining which it will be rests largely on a suspect defense and a one-dimensional offense. That means you, Colin Kaepernick's right arm. Set your expectations to moderate.

To get you ready for the season, OBNUG is previewing each team on Boise State's schedule, even the WAC ones. Today: Nevada.

The Wolf Pack did the same thing they do every season: blow out bad WAC teams and lose to everyone else. Fortunately for them, there are enough bad WAC teams to get bowl eligible, and the Pack did just that by qualifying for a spot in the Hawaii Bowl where SMU - yes, that SMU - rolled them to the tune of 45-10. Other highlights: Nevada had three 1,000-yard rushers, they were 119th in the country in pass defense, and someone started the much-anticipated Fire Chris Ault thread by season's end.

I could have pulled any of my previous previews of Nevada since they are all the same. This one came from last year.

Nevada is expected to be a darkhorse BCS buster this season. Really? Are we talking about the same Nevada? A spotty defense, suspect special teams, and the crushing reality of being Nevada will sink the Wolf Pack. Until Nevada proves consistent as a team, there's no reason to pick them anywhere else than the middle tier of the WAC. 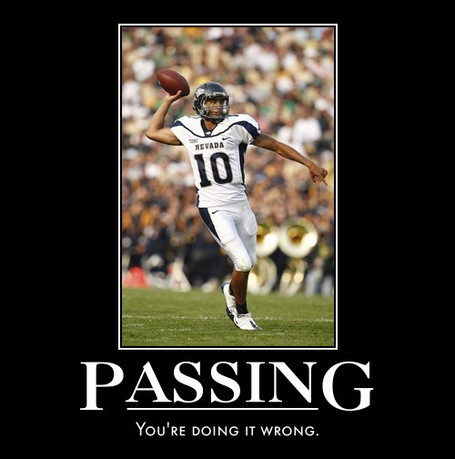 Nevada is capable of having a very special season in the same way that I am capable of having a very special performance on So You Think You Can Dance. Is it completely out of the realm of possibility that I can bust a move well enough to gain the admiration of a panel of judges who are not my wife? Of course not. There's a chance. Is there anything in my history as an anti-rhythm self-conscious white person that would suggest it is possible? Yeah, no.

This is where the Wolf Pack find themselves in 2010. People are expecting big things from a team that has historically never provided big things. Last year's hullabaloo died a quick, painless death with a 35-0 blowout at Notre Dame and an 0-3 start. The defense continued being bad, the offense continued being one-dimensional, and the big-game coaching lacked a certain, how do I say, competence.

What has changed? Nevada has a new defensive coordinator. Kaepernick is very aware that he needs to pass better. And Chris Ault is motivated by one of his best teams in years. But will it translate into a magical 2010 season?

History says no. No matter how hard the Wolf Pack try to be a dancing sensation (see below video), they have yet to give anyone any reason not to think they will fall flat on their face (see video below that).

If Nevada was a summer movie

The Sorcerer's Apprentice. Colin Kaepernick is the Nicolas Cage of college quarterbacks. Also, this movie was a real letdown, so there's that parallel, too. 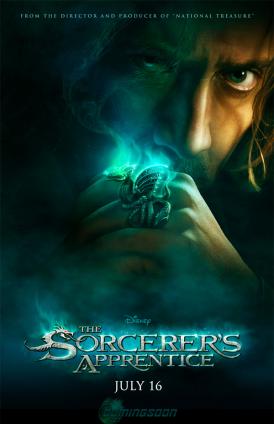 Dragon ring = Nevada's fart of a pass defense. (via static.reelmovienews.com)

The five most important questions facing the Nevada Wolf Pack

That sure was nice of Nevada's offense to give the defense a mercy flirt this spring.

Yes, the defense had a rare moment of mattering in Nevada's spring ball, actually holding the offense in check and making Colin Kaepernick look like the Colin Kaepernick that Bronco fans have come to know and love. That performance, coupled with the arrival of new DC Andy Buh, coupled with the return of WAC DPOY Dontay Moch, has Pack fans feeling very optimistic about the defense in 2010.

But then there's this: Former Utah QB Corbin Louks is likely the Pack's starting safety, Moch bookend Kevin Basped bolted early for the NFL Draft (where he promptly went undrafted), and five starters have to replaced off a unit that was all sorts of bad last season. See falling-flat-on-your-face video above.

What does Nevada have to do to be taken seriously? I mean besides fill half their stadium with some sort of regularity.

The biggest thing standing in Nevada's way is beating Boise State. An equally hefty burden is beating a good team.

Nevada failed miserably on this front last year in falling to Mizzou and Notre Dame (and even Colorado State), but they will have a chance to rectify this large resume hole this season with games against Cal and BYU. I would go on, but Pre-Snap Read author Paul Myerberg has already done it so much better.

If the Wolf Pack go 7-1 in conference play and 3-0 against Eastern Washington, Colorado State and U.N.L.V., games against California and B.Y.U. will answer the following question: Hawaii Bowl or Top 25? If the Wolf Pack beat Cal, for instance, but lose to B.Y.U., they’ll enter bowl play at 11-2; borderline Top 25, perhaps headed to the Poinsettia Bowl. Win both? Think big. As in 12-1, with two marquee victories on the schedule. Win both, and the Nov. 26 home game against Boise State becomes the biggest game of the meaningful Chris Ault era.

I agree with all that, minus the "meaningful Chris Ault era" reference.

Is Chris Ault's job in jeopardy if Nevada has another letdown of a season?

The man is a Hall of Famer, which didn't really do Bobby Bowden much good. However, Ault has proven very hard to move out of the head coaching seat, despite seasons which could charitably be described as unsatisfying. It would take a very big whiff on Ault's part to be on the hot seat in 2010 (think missing out on a bowl).

Who are all these new Nevada players I keep hearing about?

The Wolf Pack apparently have some pretty exciting new blood filling the depth chart this season. There's Freshman WAC POY Brandon Wimberly at wide receiver, along with fellow wideout Rishard Mathews. JC transfer Willie Faataualofa is expected to compete for a starting spot at DT. And S Duke Williams, who played a bit as a true freshman last fall, should be the starter at FS this fall.

I hear Colin Kaepernick wants to get better as a passer. That's cute!

Indeed, Kaepernick has his sights set on throwing the ball more consistently this year, mostly because he realized that his beanpole body won't last two minutes scrambling around at the NFL level. In that vein, Kaepernick was spotted at the Manning camp this summer where, according to the horribly biased account of a Nevada message board, he impressed everyone, including NFL trainer Chip Smith.

"Another thing I love about him is his arm strength. Honestly, you hear some stories about quarterbacks breaking fingers of receivers and all that, but he honestly did that here. I kind of saw it coming, because we have some good receivers, but this kid throws it real hard. You can even hear how hard he slings it; it makes a buzzing sound, and then ‘Pop! It’s on you. He’s a flamethrower. He puts some velocity on the ball that is really unbelievable."

OK, I'm going to stop you right there.

I don't think that Boise fans have ever questioned Kaepernick's arm strength. We know he can throw the ball extremely hard because he does so every single pass he makes regardless of location or situation. His problem is not velocity. His problem is touch.

Kaepernick was drafted as an MLB pitcher, so of course he's going to have a good arm. But it takes so much more than arm strength and being 6'6" to make a good quarterback. Obviously so, or else Kaepernick would be the one getting the Heisman pub and not Kellen Moore. Until the day comes where Kaepernick learns to control his heater, he is still going to be the same troublesome passer that he's always been.

What other people think of the Wolf Pack 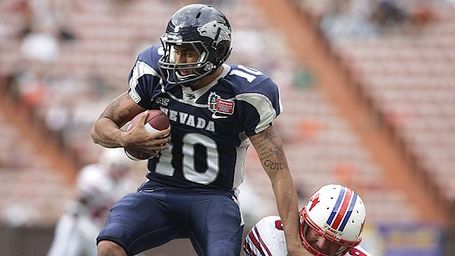 Well, it certainly isn't anyone on their defense.

You all know Kaepernick for his frolicking scrambles, media hypnosis, and acute inability to master the forward pass. But did you know he hates breastfeeding in public? He cherishes his Roady's Humanitarian full-body gray sweatsuit? He is a Bleacher Report god?

Yeah, I didn't think so.

The de facto WAC championship game is in Reno this season, which is kind of like playing in front of a home crowd for the Broncos except for the unmistakable stench of Keno and regret. Nevada's toughest test pre-Broncos will be the away visit to Fresno, but don't be surprised if the Pack find a way to lose at LaTech in the season ender, too.

I imagine the game will go something like this: Boise State jumps out to an early 28-0 lead, Nevada gets lucky with some scores right before halftime, the second half is played with my breathing into a paper bag, Doug Martin takes over the fourth quarter and puts the game away with a TD run. Oh, and I forgot the part where Joe Tessitore and Rod Gilmore lament having Kaepernick on their fantasy team that week.

The Wolf Pack should help more than most WAC teams. Nevada, if everything goes right, has a good chance of slipping into the Top 25 by the time that the BSU game rolls around. That would help the Broncos' status immensely. Of course, if things really do go right and the Pack is a Top 25 team in November, we will all be living in an alternate reality inside a Chris Ault dream so Boise State probably wouldn't even exist.

To get Top 25 eligible, Nevada would have to beat either California or BYU. An 11-1 Wolf Pack would be hard to ignore by the voters, although Craig James will sure give it the college try.

I love this one-year-old so much right now.

Nevada's defense plays better than it has in years, the Pack get a signature win over BYU or Cal, they run clean through the conference with a win at home over Boise State, Nevada is Top 15 by season's end and gets pub as a possible BCS contender

The defense continues to play like absolute garbage, Kaepernick continues to play Whack-a-mole with the intermediate passing game, Nevada falls to Cal, BYU, and Colorado State in non-conference plus two or three unexpected WAC losses, Boise State destroys them, no bowl game

How good do you think the Wolf Pack will be this season? Is being 11-1 at the Boise game really a possibility? Can the defense improve? Can Kaepernick? Share your thoughts in the comments.