"The end is near"

Purported to have 4.4 speed, there's a good chance that if a QB or running back is in the vicinity, this defensive end will be near. 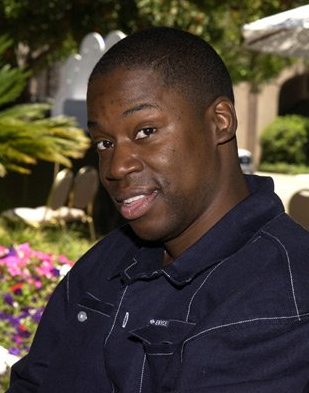 So, during last year's countdown, I paid homage to Ian Johnson on day 41 by announcing that the number had been "retired". Well, that was just my way of giving a hat tip to a player that gave his all to the Boise State program and the Boise community—the reality is, #41 has not been retired—quite the contrary, it's been handed down to another player that might be long remembered in Bronco Nation when his career is through: redshirt freshman defensive end, Kharyee Marshall.

While it was hard to believe that Marshall ran a 4.42 40 this Spring (faster than Jeremy Avery, Doug Martin, and Austin Pettis), it may be harder to believe that he only weighs 207 lbs. This obviously begs the question: with speed like Marshall's, does it really matter what he weighs? The answer, according to Chris Petersen, is a resounding "no"...

"The other day in practice, he was more disruptive than anyone we’ve had all spring long, and he’s only a freshman."

"If he keeps working and getting stronger and bigger in the weight room, he’s going to be a very good player for us down the road,"

So...exactly how far "down the road" will Bronco fans have to wait to see Marshall do his best Jerry Hughes impression? I'm guessing not long at all. With depth to spare at the end position, the Broncos will be subbing early and often, and I suspect that Marshall won't be far behind either Ryan Winterswyk or Shea McClellin. With Byron Hout moving to the MIKE position, the stage is set for all the "new" ends (Marshall, Alexander, Crawford) to make an impact this Fall. Winterswyk and McClellin have to be considered the starters, and I predict that Marshall and Tyrone Crawford will be 2nd on the depth chart. Nick Alexander and Jarrell Root will also have plenty of opportunities to make their presence felt. For longevity, Marshall may want to be in the neighborhood of 225 lbs. when Fall Camp opens, but I think even at his "current" weight, he represents a devastating speed-rush option and we'll see right off the bat, against Virginia Tech's Tyrod Taylor, how well he manages outside contain.

Like the last player to don #41 for the Broncos, Kharyee is fond of crocheting, running fast, and having sideline proposals ruined by Chris Meyers.