In high school, Mackey was named all-conference as both a junior and senior and earned third-team all-state honors as a senior. In Mackey's senior season at West, he made 143 tackles, forced three fumbles and had one fumble recovery—as a junior made 128 tackles with an interception and two forced fumbles. Mackey continued his tackling ways at Bakersfield College where he was a two-time all-conference player and a third-team JC All-America. In his two years at BC, Macky made 191 tackles, 4 interceptions, 5 forced fumbles, 2 fumble recoveries, and scored a pair of defensive touchdowns. Scout.com rated Mackey as a four-star prospect out of JuCo and he was held an offer from Washington State as well as his Bronco offer.

This one picture I found of Forest Whitaker

Two-time all-conference player at Bakersfield College. JC All-American. Being a part of this play: 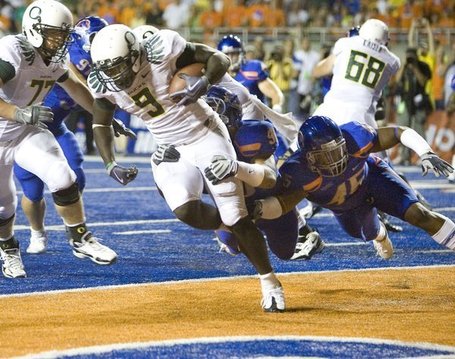 We had to wait a while to see Mackey take the field after a knee injury forced the Broncos to use his available redshirt in 2008. Mackey was worth the wait, as he really came into his own in 2009, making 36 tackles (4 for loss) and 3 PBUs. Unfortunately, Mackey's 2009 season ended the same way his 2008 began...with a knee injury. Mackey was injured and lost for the rest of the season in Boise State's game against Nevada after seeing time in 11 games and making 8 starts for the Broncos. Bummers all around.

The obvious question now is how Mackey's knee is holding up. He was still nursing the injury in Spring Camp, and, at present, I have no idea where he's at with his rehab. In his absence this spring, Derrell Acrey picked up the flag and ran with it and you'd have to consider linebacker turned defensive end turned linebacker Byron Hout to be a good candidate for a wealth of playing time this Fall. The defense won't wait for Mackey to heal, so here's where I see the depth chart standing when the curtain opens on Fall Camp: 1A – Derrell Acrey, 1B – Byron Hout, 2 – Tommy Smith 3 – Daron Mackey, 4 – Allen Mooney. Now, if Mackey is healthy, the game has changed...and I think he could easily be 1A or 1B, but I wouldn't expect him to be completely rehabbed when practices commence. Hopefully, by mid-season we'll have the intensity and sure-tackling that Mackey provides back in the lineup.

MacGyver was brought in to repair Mackey's ACL. Currently Mackey's knee is being held together with 15 inches of hemp twine, 3 bobby pins, a Dr. Scholl's in-step, and 2 crazy straws.