Let's find out if there's something cooking in Moscow, Idaho besides crystal meth. The Vandals are coming off their best season in a decade and are still riding high after winning their own personal Fiesta Bowl. Has Robb Akey finally yukked his way into being a competent coach and will the Vandals respond to having a 'kick me' sign bullseye on their backs? I, for one, can't wait to find out.

In a nutshell: Nathan Enderle found some poise and composure hidden in a secret cave outside of Troy, but with the Vandals top rusher, top receiver, and best O-line in a decade gone, they'll be lucky to scale the "heights" they reached in 2009.

To get you ready for the season, OBNUG is previewing each team on Boise State's schedule, even the WAC ones. Today: Idaho.

Idaho defied all logic, reason, or proof of a benevolent loving God last year as they finished with a winning record, a bowl win, and a hastily thrown together parade past the Corner Club in Moscow. In a mind-boggling month-long stretch, Idaho completely forgot they were Idaho, winning 5-straight and suffering a rash of shoulder dislocations from furious self back-pats. Hell started to thaw out by late October and the Vandals won just 1 of their last 5 games...still it was enough for them to sneak into the Humanitarian Bowl (thanks to Boise State's BCS-busting) and eke out a win against Bowling Green in a game that answered the age-old question: What if you played a football game and neither team played defense? Long dormant Vandal fans lost their ever-lovin' minds soon thereafter, giving Robb Akey a contract extension and contracting an alumni-wide case of amnesia that left them unable to remember the last decade or the last 6 games of the season (in which they surrendered 293 points).

Last season, I accurately predicted that the Vandals could get 3 wins against nobodies, whozits, and also-rans.

The wheels have been off for years, but if the Vandals can't get 3 wins this year with their softest sched ever, it's time to put'er up on cinder blocks.

What I failed to predict was that the Vandals would be so emboldened by these wins that they would go all Freaky Friday and swap bodies with WAC teams that usually at least have a pulse (San José State, Hawaii, Louisiana Tech). I can't really feel too bad about this, I mean Nostradamus wouldn't have picked the Vandals to win eight games (although he did predict a mustachioed despot to rise from in the town of Mosskowe). 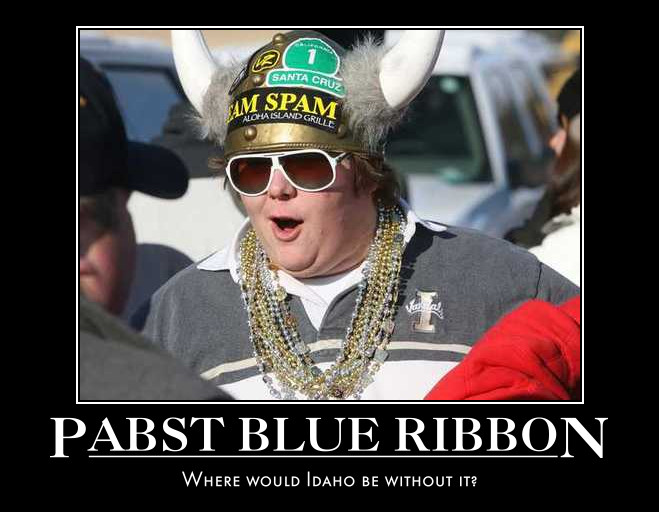 Watching Idaho football last season was like Spock experiencing love for the first time. The competence was so new, so exhilarating, but also a little confusing and frightening for a fanbase that had largely never experienced it. Was Idaho's 8-5 season (complete with exciting bowl win) a portent of things to come or a one-year anomaly...a "2007 Hawaii", if you will? I'm leaning toward the latter.

Nathan Enderle developed into a much better game manager and even showed some pocket presence in 2009, what with the pocket not being dashed to pieces like in years past, but I think by game two in Lincoln, Nebraska, we'll see if Idaho can hang in 2010 or if it's another year of two-hand touch for the tribe from the North. It's really a shame that 2010 might be the last year the Broncos and Vandals play for a while...their newfound swagger was adorable!

If Idaho was a summer movie

The Expendables. A bunch of guys that are way past their prime, pull out all the stops for a once-in-a-decade thrill ride. Too bad most of them will be dead soon. 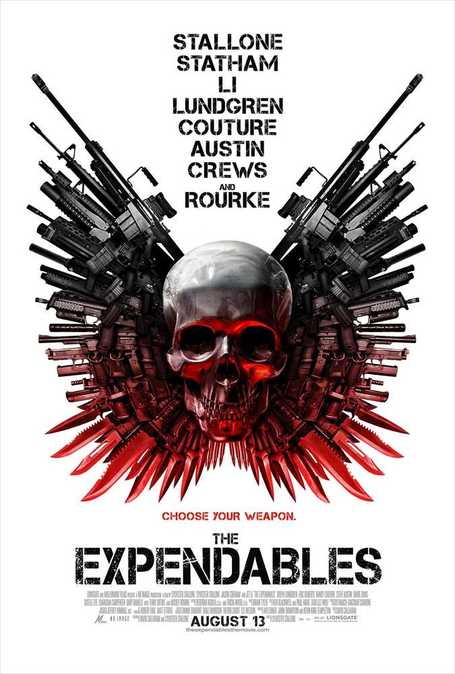 The five most important questions facing the Idaho Vandals

Can anyone take Mike Iupati's place?

No, but someone's bound to try. The mammoth Iupati was drafted in the first round of the NFL draft and was Idaho's Ryan Clady, so his shoes will be nigh unfillable...and least in the short term. In sheer hugeness, junior Tyrone Novikoff is the closest to Iupati's formidable size, standing 6'7" and weighing 318 lbs. Freshman Jordan Johnson is another Vandal O-lineman that could double as a tree trunk. My money is on senior JC-transfer Tevita Halaholoto be the impact lineman for the Vandals this year. He was a JC All-American but played sparingly in 2009. He's no Iupati, but he'll have to do.

Yep...but that's kind of like of like Rob Schneider making a pre-Oscar watch list. It's a nice sentiment, but nothing will come of it. 2009 was a banner year for Enderle, and he finished 5th in the nation in passing efficiency...but his 2.88 INT percentage is still too high and his completions/game have him ranked in the high 40s. Enderle was less of a liability in 2009 thanks in no small part to his O-line actually blocking for him (cutting the number of sacks taken in half). This year, with a complete rebuild on the O-line, I expect Enderle's sack numbers to creep up again, causing his efficiency to precipitously drop. Enderle's shown improvement, I'll give him that...but let's not pretend for one moment that he's one of the top 20 quarterbacks in the nation.

The jury is still out. He's an excitable guy and his players seem to like him, and going for two in the bowl game took stones even if it was textbook. However, I'm still not sold on Akey's coaching ability, it will take more than one winning season in three to convince me otherwise. Plus, that dude has to do something about his team's APR, because they can't afford to lose any more schollies.

Whither the Vandal running game?

In 2009, Idaho's averaged 165 rushing yards/game—good enough to have the 45th ranked ground attack in the country while rushing for 25 TDs. In 2008, the Vandal attack was only good enough for 74th in the nation, with 133 yards/game and 9 scores. So, what changed in 2009? It all goes back to blocking. The Vandal O-line was experienced, and solid last season and had an All-American in their ranks, they also had a bulldozer of a running back named DeMaundray Woolridge that escaped from Pullman, WA and nearly became a 1,000 yard back for the Vandals. Now that Woolridge and most of the O-line have gone the way of the dodo, it will be interesting to see if the Vandal rushing attack can find its feet. Junior Corey White has yet to become the player the Vandals think he can be, but diminutive tailback Princeton McCarty had nearly 700 yards on the ground in 2009 and can catch too. McCarty will likely be the Vandals primary back in 2010, but without a formidable O-line, I doubt his frame can sustain too heavy a workload.

Has Shiloh Keo been eating tubs of Crisco?

I don't know if Vandal safety Shiloh Keo has been bulking up for an NFL run or to be a Jabba the Hutt stand-in in the next Star Wars prequel. Keo came to Moscow looking basically like this:

GoVandals.com says that Keo is now a svelte "216", but I think they might have transposed the one and the six. At any rate, Keo is packing more cushion nowadays, but I strongly doubt Crisco is the culprit—there's been a shortage of it in Moscow for years, but I'm not sure why... 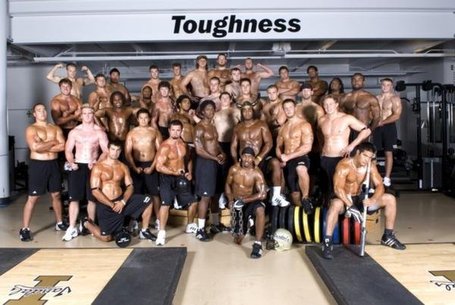 What other people think of the Vandals

I can't bring myself to put Nathan Enderle here, I just can't. Keo has actually been a somewhat bright spot on the Vandal defense since arriving on campus in 1987. Of course, finding a bright spot on the Vandal defense is like finding a clean spot on Pig-Pen. Since being pressed into service as a true freshman in 2006, Keo has racked up the tackles and the accolades on a Vandal defense that desperately needs a star. For his career, Keo has 296 tackles and 8 INTs (although 31 tackles were from a year he got back due to a medical redshirt), and was named first-team All-WAC in 2009. Keo isn't a game-changer, but he's a vocal leader for the defense and an effort guy if I ever saw one.

Nothin' like 3 losses in a row to work up an appetite for turkey and stuffing.

The Kibbie Dome malaise will doom the Broncos to another slow Moscow start, but by the end of the third quarter Rob Spear will be keying the Bronco buses. Make sure you check NCAA Football Odds before this one...the Broncos will be amped to cover the ridiculous spread as a parting gift to the Vandals.

Last season, the only two WAC teams that one a postseason game were Boise State and Idaho, this year I think the Vandals will fall short of another bowl game, but not fall far enough to assassinate our SOS any further.

Babies are stupid. Hey, get that out of your mouth!

The Vandal O-line is more porous than Edward James Olmos' cheeks and Enderle is under too much pressure to have any consistency. The Vandals get by North Dakota, New Mexico State, and San José State and a UNLV-Western Michigan pick'em, but lose the rest and Robb Akey's mustache is repossessed.

Think the Vandals turned a corner in 2009 or peaked? Was Robb Akey's mustache created when Chuck Norris and Charles Bronson's mated? You know they're opening a Vandal Store in downtown Boise? Please, no loitering.