Share All sharing options for: Have a gay old time with the 2010 Hawaii Warriors [Team Preview]

Find out what is new on the islands in 2010 and discuss whether or not you think the Warriors can be a bowl team with their schedule. Looking forward to Hawaii's visit to Bronco Stadium in November? Long for the days of June Jones and Co.? Let's talk about it.

In a nutshell: Bryant Moniz is not Colt Brennan, and the Hawaii Bowl is not the Sugar Bowl (thank goodness, right?). But the Warriors should be happy to get their six or seven wins, go bowling at home, and give Greg McMackin way more job security than he deserves.

To get you ready for the season, OBNUG is previewing each team on Boise State's schedule, even the WAC ones. Today: Hawaii.

Hawaii essentially had two seasons in 2009 - an end of days 2-6 start coupled with a happy fun time 4-1 finish. Unfortunately, 6-7 does not a bowl team make, at least not for a couple more years when the NCAA lowers the bowl bar to 5 wins. Still, the Warriors' encouraging close to 2009 (including an upset over Navy, in a game that kind of still mattered) gave the team the confidence it needed to keep McMackin around and hope for a bowl in 2010.

I don't need my accountability group to demand that I show you this. In fact, I just so happen to keep last year's Hawaii preview on my person at all times since it may be the last time I ever get something this right.

It's Hawaii Bowl or bust once again for the Warriors. Losing nine defensive starters won't help, but not letting Inoke Funaki run the offense will. Still, there may be too many obstacles to overcome this season for UH.

Not only that, but I accurately predicted Hawaii's exact record in 2009. Some people dream of curing cancer. I dream of being a seer of mid-level WAC teams. (Please ignore my picking San Jose State to finish second in the WAC last year. Look away!) 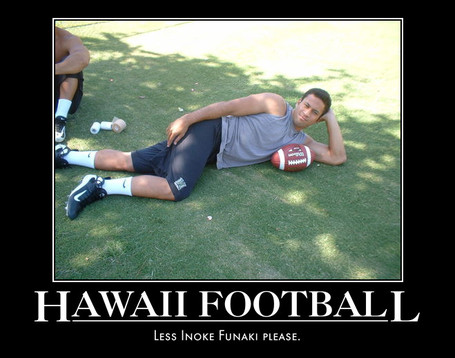 Despite all the turmoil on the islands last season (McMackin's ill-fated press conference bigotry speech, an injury parade that claimed more than its fair share of starters, Bryant Moniz's haircut), Hawaii was a win over Wisconsin away from qualifying for a bowl game. Fittingly enough, they lost 51-10.

So what's to make of a Hawaii team that showed surprising moxie late in the year after showing surprisingly nothing early on? Well I should first warn you about placing too much stock in 17-10 overtime wins over San Jose State. Easy schedule aside, Hawaii became a dependable team by the time 2009 was all said and done. Was it good coaching? Probably not. Was it a super easy schedule, Navy not included? Most likely. But as teams like New Mexico State can attest, even an easy schedule doesn't make you a dependable team.

The schedule in 2010 is going to be just as easy, especially since the WAC still exists as we know it. QB Bryant Moniz has some experience under his belt, the offensive skill position players are healthy for once, and the defensive secondary is loaded with returning starters.

Don't start 2-6, and the Warriors should be bowl-bound.

If Hawaii was a summer movie

The A-Team. It was much better years ago, but for whatever reason people still want to see the current version. 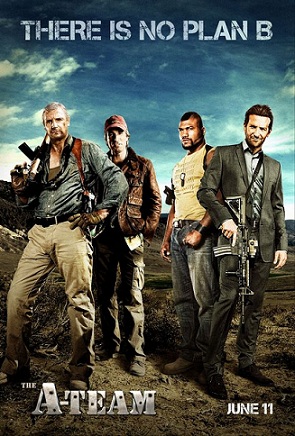 The five most important questions facing the Hawaii Warriors

There are some who think that Hawaii has a chance now that the Trojans are coached by a high school heartthrob and especially with the dark cloud of NCAA death hanging over their heads. But come on. Hawaii beating USC? That would be an upset for the ages and probably cause Karl Benson to redirect the WACSports.com URL to show the box score of that game in perpetuity.

Could Hawaii keep it close? Absolutely. And even if they don't, it's not like the Warriors season hinges on a nonconference game in Week One. How ridiculous would that be?

Is there anyone left from Hawaii's offensive line last year?

Hardly. The Warriors lose four of their five O-linemen from last year, including all-WAC center John Estes. New offensive coordinator Nick Rolovich (yes, that Nick Rolovich) probably couldn't call running plays if he wanted to. The line's progress will be a big factor in how far Hawaii gets this season and how much leg cartilage Bryant Moniz has left.

Why pass on the Warriors when it is so easy to run?

Hawaii's front seven has consistently been the team's strong suit over the years, but not any longer. The secondary returns the entire two-deep in 2010. The front seven does not. LB Blaze Soares, the defense's only All-WAC player last year, is gone, and the linebacker corps is working with converted safeties in his stead. DT Vaughn Meatoga leads a defensive line of people you could never name. Running the ball against Hawaii will be gameplans one, two, and three for opposing offenses this fall. Gameplan four, not coincidentally, is wait for Bryant Moniz to throw a pick-six.

Is Bryant Moniz the right guy for the Hawaii offense?

Moniz is expected to be the starter from game one, so Hawaii is definitely intent on finding out if he is the right guy or not. Last year, injuries opened the door for backup Shane Austin and others to shine, and they didn't really. So that made the Moniz decision pretty easy.

But is Moniz even that good? Against bad teams, he is certainly serviceable. Against Boise State, he was decent for a bit before getting knocked out of the game. His season stats (57 percent completion, 14 touchdowns, 10 INTs) are nothing to write home about, although he did get better as the season went along. Hawaii is hoping that his progression will continue. If not, they had better start building Shane Austin's confidence back up.

Was Greg McMackin losing his defensive coordinator title part of the reparations from the gay slur at 2009 WAC media days?

Not that I know of. McMackin apparently ceded his playcalling duties to defensive line coach Dave Aranda because the defense wasn't terribly good when McMackin was calling plays. And yes, McMackin was considered a defensive guru when he took over Hawaii.

What other people think of the Warriors 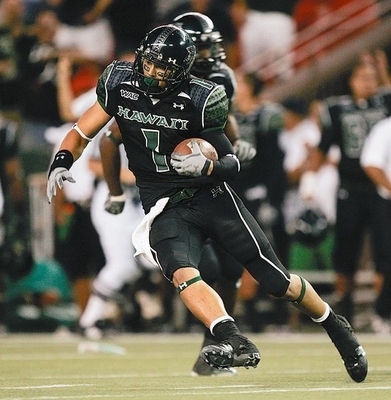 Salas was a first team All-WAC player last year in every game not involving Kyle Wilson. You would be excused for not thinking Salas is any good since he didn't stand out at all with Wilson covering him. But Salas is good. There are mediocre WAC secondaries that can back me up on this. The guy had 1,500 receiving yards last year, which is still like 1,200 receiving yards when you convert Hawaii passing yards to regular passing yards. He is strong, quick, and smart enough to find open space and make plays. Just not against Boise State.

Again, the Warriors get San Jose State and New Mexico State to close the year, which will be a nice reprieve after getting hammered by Boise State on the road. If the Warriors are serious about being one of the WAC's better teams, they had better be no worse than 3-2 in conference when the BSU date rolls around.

Quite possibly yes. The Warriors could do the Broncos a big favor by knocking off USC, Colorado, and/or UNLV - and yes I had a hard time putting USC in that list. Beat a BCS team or two, qualify for a bowl, and the national media would have a hard time discounting the Warriors as jayvee quality.

Greg McMackin would like to buy the one-year-old a Diet Coke.

Hawaii improves by leaps and bounds on offense and defense, gives USC trouble, upsets Fresno and/or Nevada, and finishes the regular season at 10-3 - good enough for a Hawaii Bowl and possibly much more

McMackin gets suspended for misogynistic comments at WAC media days, injuries happen, teams run all over the defense, and Hawaii falls short of the seven-win plateau once again

Think the Warriors can get into a bowl this year? Think it would help Boise State's strength of schedule that much? Wonder what Greg McMackin thinks about new Coke with lime? Share your thoughts in the comments.