Hard to believe, but there are only 50 days until the Broncos storm the Capital to take on the Hokies. As you may remember, last summer I embarked on the Herculean task of counting down a different roster spot for each remaining day until kickoff. So far this year, we're batting a thousand, so drop me notes of encouragement now and again so I can find the strength to get through the next couple months without breaking the streak.

We've got 50 days until kickoff...so today we'll be highlighting #50 on the Boise State roster—J.P. Nisby

As a high school teammate of Doug Martin, Nisby earned two varsity letters. He was named all-state, all-area and all-league first team as a junior and earned all area honors as a senior. Nisby also received the Stockton Athletic Hall of Fame Award in 2006. Nisby had one other offer from Nevada.

Won a section title at St. Mary's. Received the Stockton Athletic Hall of Fame award. Got to be teammates with Doug Martin.

Nisby has contributed the last two seasons, but has yet to become a major force on the defensive line. With a total of only 20 tackles in his first two years, but with playing time increasing from 7 games in 2008 to 10 games in 2009, 2010 will hopefully be the season that Nisby can become a permanent fixture on the Bronco two-deep.

Nisby, to borrow an expression, is built like a brick s***house and is strong as an ox (benching 445). The only knock I've heard about him is his cardiovascular fitness. If Nisby can get his motor revved to complete more than one series, he may be the favorite to back up either Billy Winn or Chase Baker (likely Baker). WIth an injury holding him out of some games last season, and some of Spring camp, Nisby will need to be back at 100% in the next few weeks, because with the depth the Broncos have on the D-line...they aren't going to wait for him.

We're nearing the end of our DT highlights that will culminate with Ricky Tjong-A-Tjoe next Sunday. At that time, I will predict my opening game roster look for the interior D-line, but until then, it will have to suffice to say that Nisby will have to distinguish himself from no less than four, and possibly as many as six defensive tackles in Fall Camp if he is going to be called upon to contribute in 2010. There are simply too many good defensive lineman on the squad right now to take a single play off. Get that cardio right, J.P., and we'll see plenty of you this season.

J.P.'s father, John, played offensive guard in the NFL back in the 50s and 60s. He was drafted in 1957 by the Green Bay Packers, traded to the Steelers, and in was one of the first African-American players to play for the Washington Redskins (the last team to integrate), when he joined that squad in 1962. 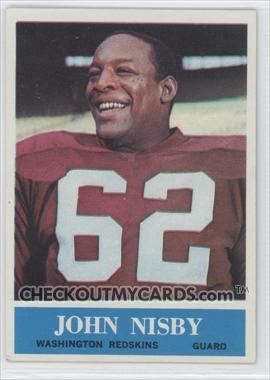