There is not a whole lot to like about the San Jose State football program, unless you enjoy lopsided losses and exact replicas of 2009 New Mexico State. The Spartans are in shambles with no offense, little defense, and a rebuilding plan to rival the Boise Hole.

Will the Spartans be winless in 2010? Will Boise State score 70 on them before halftime? Find out how bad things are for SJSU after the jump, and weigh in with your predictions for the Spartans' season in the comments.

In a nutshell: The Spartans are essentially starting from scratch with a team devoid of talent, a coach devoid of experience, and plenty of apathy to go around. Four wins is a best case scenario. One win is to be expected. Dick Tomey is a seer, getting out when he did.

To get you ready for the season, OBNUG is previewing each team on Boise State's schedule, even the WAC ones. Today: San Jose State.

San Jose State opened 2009 with games against USC, Utah, and Stanford - all predictable losses - but the season didn't officially turn south until a last-minute, four-point loss at home to Idaho, which set the Vandals on the course of Human Bowl history and plunged the Spartans into Dick Tomey's layaway crypt. The Spartans closed out the year with six losses in their final seven games, Tomey rode off into the sunset on a motorized scooter, and SJSU earned the title of WAC's new worst team.

For whatever reason (being a moron, mostly), I picked San Jose State to finish No. 2 in the WAC last year, despite my knowing that they were terrible in some pretty important places.

San Jose State might have one of the best teams that no one is talking about. Or they might have a 3-9 squad that isn't very good. The pressure lies on the quarterback position, a shaky offensive line, and unproven CBs. The rest is in pleosaur Dick Tomey's hands.

This is why I can't be trusted with big decisions. 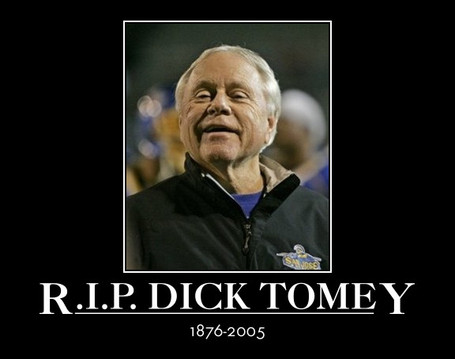 I still have a hard time believing that San Jose State is the new Idaho. I mean, there were definitely games in the past where the Spartans put the fear of God into Bronco fans. I'm pretty sure Graham Watson even picked BSU to lose one of those.

A lot has changed in a year-and-a-half. The Spartan defense crumbled last fall after too many years of holding together that leper of an offense. QB Jordan La Secla proved to be no better than QB Kyle Reed who himself was no better than a CPR dummy. And head coach Dick Tomey, the last vestige of prestige and old man smell that the program had left, packed his bags and left, to live out the rest of his days in a Denny's somewhere.

What remains of the good old days of San Jose State football? Pretty much nothing. New head coach Mike MacIntyre has arrived to fill Tomey's orthopedic shoes, and he has 15 returning starters to work with. Of course, these are the same starters that did stuff like this (courtesy of the Sporting News preview magazine)

One big problem is that La Secla threw more interceptions (11) than touchdown passes (10) last season, and the linemen and running backs produced a meager 2.6 yards per carry.

So the only things wrong with the Spartans' offense were passing and rushing?

MacIntyre has his hands full with reversing the fortunes of a sagging program and completely rebuilding both sides of the ball. At least Graham Watson won't be picking the Broncos to lose to SJSU any time soon. I think.

If San Jose State was a summer movie

Yes, it is as awful as it sounds. Here is an 11-minute clip if you don't believe me.

San Jose State thought they would give this coaching rarity a try when they pegged Tim Landis to take over offensive playcalling duties. Of course, they had originally picked an actual OC, but he left for "family reasons" with the "family reasons" being that coaching the San Jose State offense would have led to his murdering his family.

Landis has been a former head coach at the non D1A level, and apparently he was high on taking the air out of the ball, as evidenced by the team's performance in spring ball. Gone are the days of the spread offense and back are the days of muddling through dive plays on first and second down and TE play action on third. Good news for TE Ryan Otten. Bad news for Landis because, joke's on him, the Spartans can't run the ball worth beans.

Could San Jose State be the worst 2-11 team in the history of college football?

I believe so, yes. Most historically bad teams finish winless on the season, but the Spartans took a wise step toward avoiding that fate by scheduling not one but two cupcake teams. Southern Utah should be a Spartan victory, and UC Davis should be another, although I wouldn't hold my breath.

Things you can hold your breath for? San Jose State losing to Alabama, Wisconsin, and Utah on the road.

Who will be completing 30 percent of his passes for 5 yards per attempt this season for the Spartans?

The Spartan QB derby is very much open after spring ball with returning starter La Secla, freshman Dasmen Stewart, and JUCO Matt Faulkner vying for the job. These are the types of things that need to be made into reality TV shows. Why is Jerry Seinfeld not all over this?

Do RBs Lamon Muldrow and Brandon Rutley hate it there?

Sadly enough, San Jose State's two best offensive players are its running backs, Muldrow and Rutley, but you wouldn't know that from the anemic rushing totals that the Spartans put up on a consistent basis. Fact is, Muldrow and Rutley could be Jeremy Avery and Doug Martin, and it wouldn't matter so long as they are rushing behind the San Jose State offensive line. Running behind that line is like having five extra defensive linemen trying to stop you from gaining yards.

However, I don't think that Muldrow and Rutley hate it in San Jose. It seems like new OC Landis has plans to expand the running game, which means an obvious expansion of Muldrow and Rutley's roles. Plus, four linemen with at least 10 starts return, so it won't be all bad times in the backfield. That game against Southern Utah could be pretty fun (but that might be it).

Any chance that the Spartans will be doing more cheap shot hits on Kellen Moore this season?

Fortunately, Spartan hit man Adonis Davis is gone, as is fellow D-lineman Justin Cole. Essentially, every San Jose State defensive player you might recognize (with the exception of Duke Ihenacho) will not be around for 2010. This is obviously a good thing for Kellen Moore's internal organs, and it might even be a good thing for San Jose State. The Spartans were No. 119 out of 120 last year against the run, so a change could do them good. Then again, a change to a bunch of inexperienced nobodies might not be so hot.

What other people think of the Spartans 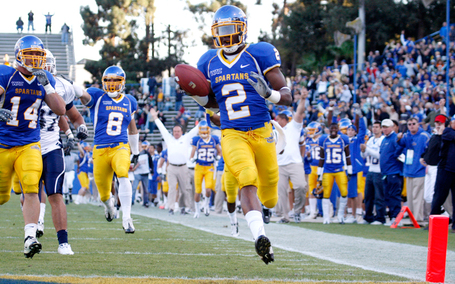 Ihenacho is Jeron Johnson's chief competition for first-team All-WAC honors this year, something that Ihenacho beat Johnson for last season. The senior safety is by far San Jose State's best player, and he should end up being a good pro prospect, too. You'll be able to notice him pretty clearly since he'll be the only one making tackles on defense.

SJSU's WAC season begins with the Nevada game, meaning that the Spartans get the WAC's three toughest schools back-to-back-to-back to open conference play. At least we can all end the San Jose State WAC darkhorse talk early. That should leave more time for the Idaho WAC darkhorse talk that I'm sure everyone's excited about.

I probably should have made this score line even worse, but I gave the Spartans the benefit of the doubt since Spartan Stadium is somewhat of a house of horrors for the Broncos. At least the game will not be at 9:00 a.m. on a Saturday. I will never forgive San Jose State for making me miss Eek! The Cat that one year.

Not in the least.

The Spartans beat their two FCS opponents, trip up a couple of WAC teams along the way, and get some good experience for young players in hopes of a bounce back 2011

Do you think the Spartans are the WAC's worst team? Wish Dick Tomey was still around to make fun of? Any early score predictions for the Boise State - SJSU game this season? Share your thoughts in the comments.