Last year's Toledo Rockets team fizzled out of the bowl picture with a late season swoon that cost them some seriously good EagleBank Bowl swag (free checks for life!). This year's Rocket version is hoping to avoid the same fate, albeit with a new QB, new front seven, and a schedule that hurts to look at.

Can Bronco fans expect Toledo to be a bowl team in 2010? Is the game against Boise State going to be as lopsided as everyone thinks? Get the goods on the 2010 Rockets, and weigh in on whether or not you think Toledo will be bowling at season's end.

In a nutshell: Tim Beckman and Co. have a good foundation for the future and a very iffy one for 2010. Depending on QB play and player development, they could be MAC contenders ... or they could be 3-9.

To get you ready for the season, OBNUG is previewing each team on Boise State's schedule, even the WAC ones. Today: Toledo. Scroll to the bottom for previous previews:

Toledo came into the year with hopes of winning the MAC West and left the year with a 5-7 record and an inexplicable loss to Miami (OH). New coach Tim Beckman's defensive expertise was lost on the defense. QB Aaron Opelt's injury forced a revolving door of so-so signal callers And Bowling Green fans were never happier. 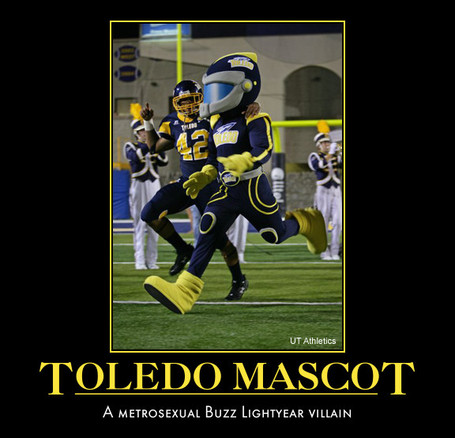 The Rockets are an interesting case study in the frustrating toils of mid-level college football teams. Last year Toledo was supposed to be the business with gobs of returning starters and a schedule with some room to work. Then bad things started to happen, and before you knew it, the Rockets were playing a bowl-or-bust game against Bowling Green and letting the Falcons block two punts for touchdowns.

This year, things could go in either direction once again. The good news is that coach Tim Beckman has a year of experience under his belt and some good young players to work with. The bad news is that five of his defensive front seven are gonzo and he is replacing a starting QB and RB.

Projections for this Toledo team in 2010 are nothing short of complete guesses at this point (as you will see below in the "What Other People Think" section). The Rockets will either be MAC West trophy winners, mediocre also-rans, or bottom-feeding Eastern Michigan chums. Boise State on the other hand will either be WAC champions and national title contenders or ... Jesus will return, riding a Lhasa Apso made of Reese's Peanut Butter Cups (in other words, the world will end - or mine will, at least).

It's good to be a Bronco fan. No offense, Toledo fans.

If Toledo was a summer movie

Knight and Day. It has bits and pieces that could make a good movie, but there's really no telling whether you'll like it or not until you pay $10.00 to see it. So you're probably not going to see it. 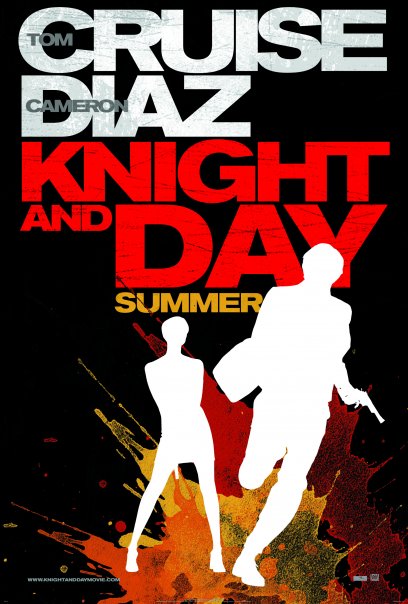 The five most important questions facing the Toledo Rockets

Who wants to play defensive line for the Rockets? You? Me? That metrosexual mascot of theirs from Galaxy Project Runway?

The Rockets do indeed need help along the defensive front because, let's face it, that thing was a sieve last fall. The overall D was 95th in the country, and they gave up more than 31 points to all but two MAC opponents. Yes, the MAC with all the teams you can't name.

The team's two DEs return from last season, and five redshirts are poised to join the rotation in 2010. Coach Tim Beckman was supposedly a defensive guru at Bowling Green and Oklahoma State, so if he can't get this group in gear, then it probably isn't happening. Although Brent Guy would sure like to take a stab if you're asking.

Aren't you supposed to schedule at least one non-conference game you can win?

When did Vinny Perretta become an African-American and start playing for Toledo?

That is not Vinny Perretta. That is Eric Page, a freshman All-American and pretty much the last remaining threat on the Toledo offense. Page stands only 5'10" and 171 pounds, so he is definitely Perretta-esque. He also 82 passes for 1,000 yards and 7 TDs, which is Titus Young-ish. With the loss of fellow 1,000-yard wideout Stephen Williams, Page is going to be counted on to carry the offense. How Kellen Moore-like of him.

Why are you at all optimistic about the Rockets' season? Is there an open jar of rubber cement next to you?

I believe in the law of turnover averages, namely that a wildly plus or minus TO rating will come back to earth in subsequent seasons. The Rockets had a wildly bad TO margin in 2009 - 111th to be exact. Bad fumble mojo does not often strike twice. Plus, consider that the Rockets outgained conference opponents by an average of 50 yards and lost some games on hideous special teams play, and you have the makings of a turnaround season.

I've heard of throwing players into the fire, but three freshman players in one secondary?! Tim Beckman is on drugs, isn't he.

It probably wasn't the best idea to start three freshman last season at both CB spots and safety. But think of the experience they gained and the stories they'll have of Dan LeFevour burning their shorts clean off. The three now-sophomores should be better in 2010, and that should help the overall impact of the defense. And if not, I'm sure Beckman can find a trio of intramural kids to replace them.

What other people think of the Rockets 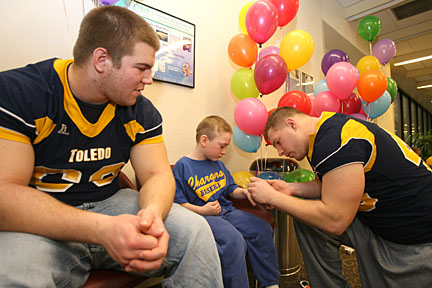 I have no idea which one he is (via utnews.utoledo.edu).

Kowalski is a preseason All-MAC candidate for his sterling play at center - a position that he tried out for the first time last fall. Moving over from guard, Kowalski had a stellar season, anchoring a Toledo line that was hardly to blame for the team's struggles late in the year.

While I'm on the subject, if a center is your team's best player, you probably aren't in store for a very good season. Remember last year's Hawaii team? They're best player was C John Estes who had his own website and everything. Basically what I'm saying is that if Thomas Byrd is ever Boise State's best player, someone needs to put me into a Rip Van Winkle nap for about four years.

Originally scheduled for Week Two of the season, the Toledo game got bumped back to October thanks to Boise State's disaffection for playing games on four days' rest. It probably wouldn't have mattered much. See below.

This game reminds me a lot of when Miami (OH) came to town last season: No one I know is attending and I already know the outcome.

Not with that schedule, they won't. The Rockets will be fortunate to go 1-3 in non-conference play, and with tough tests on the road at Ohio and Northern Illinois, their MAC sched is no piece of cake, either. The best case scenario for the Broncos' SOS is if Toledo somehow manages to sneak into the MAC championship game, perhaps with a 6-2 conference record (which will probably be a 6-6 overall one). If UT can score six wins in conference, they will at least be assured bowl eligibility, and even a Little Caesar's Bowl would help SOS. That's right, Mark May. It's a bowl. And we'll count it if we have to.

I fear that the one-year-old has me on this one.

Toledo comes out like gangbusters in conference play and wins the MAC West on the arm of Austin Dantin and the pure will of a vastly improved defense, the Toledo mascot celebrates by getting Marvin the Martian completely wasted at an earth rave

Austin Dantin turns out not to be the answer, the defense struggles to get up to speed, and the Rockets suffer through a three-wins-or-less season that slows down their inevitable ascent back to the MAC's best

Does this Toledo team smell like a bowl qualifier? Think they have too much to overcome on defense? Is your ticket to the Toledo game on Craigslist as we speak? Share your thoughts in the comments.