We've got 67 days until kickoff...however, that particular number is yet to be assigned, so today we'll take a look at a poor, numberless Bronco—Tyler Horn 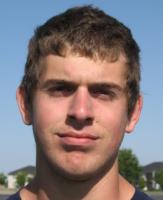 When the Broncos want a local standout...they get the local standout. Such was the case with Tyler Horn, the big defensive end that terrorized the SIC for Meridian's Mountain View High School. The 6'4" Horn was honorable mention all-state and All-SIC as a junior, but landed on the first-team for both as a senior. His statlines are none too shabby over that two-year span...95 tackles, 25 sacks, 5 forced fumbles, and 3 pass deflections. In Horn's senior year alone, his tackles-for-loss added up to more than 100 yards of lost yardage for his opponents. Rivals.com had Horn pegged as the #2 DE prospect in the state for the 2010 class (still no idea who was ranked higher), but as far as I know, Boise State was the only school to offer. Horn will likely be grayshirting and joining the team as a redshirt in 2011. 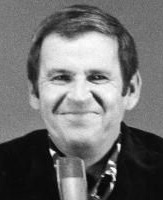 Something about Tyler's mugshot reminds me of Paul Lynde. This is no way suggests that Tyler is...you know...a fan of Hollywood Squares.

Probably me suggesting "vuvuzela" for his nickname.

As Horn is set to grayshirt, his 2010 will be mainly spent at the Chuck-o-Rama with Spencer Gerke. Horn is still a trim 225, and will probably use his grayshirt period to fill out his frame a bit more. At Horn's height, he could probably land in the 250 range and handle it well. Horn's high school coach, Judd Benedick, thinks he may even grow a bit more:

He's 6-4 and his dad is taller than that, so he should continue to grow. He has the frame and moves really well for a kid that size."

His dad, unfortunately, has no eligibility left.

So...Horn will be seldom seen during the 2010 season, but in 2011 all bets are off. He'll be joining a defensive end rotation that will (still) be seriously loaded with seasoned sophs Kharyee Marshall and Nick Alexander, and seniors Shea McClellin, Tyrone Crawford, and Jarrell Root. There will be blood.

Horn has a grandfather named French, a great-uncle named Fog, and a distant cousin named Alpen.