Though Thompson left conference expansion possibilities open-ended, the news of Boise State's lack of invite is a rather sudden, sobering conclusion to a months-long courtship. Where do the Broncos go from here? Will there ever be a chance of expansion? Leave your thoughts in the comments, and refresh this story for updated information on the situation.

Change is in the air, and Mountain West presidents do not like that one bit

The overarching factor in the MWC sitting tight and sitting on its hands was that conference upheaval is afoot across the country and the MWC would much prefer to wait for the dust to settle. Little do they know what is usually left after the dust settles: Iowa State. 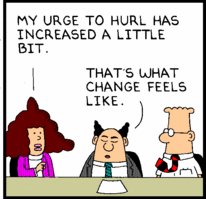 Mountain West presidents claimed that they are happy with the strength of the Mountain West, that there was no need to make a decision today, and that sure they're still interested in Boise State but don't rush them these things take time.

Is waiting the right move? I don't think so. The Mountain West took the easy way out, and despite my being a generally good person most of the time, I hope they pay dearly for it.

It's not so fun when the Broncos are on the wrong end of being wanted.

After today's non-invite from the Mountain West, I now know how the WAC feels. Boise State played the courtship game with bigger and better conferences for pretty much all of 2010, all the while knowing that the WAC would be waiting with open arms to welcome them back if things didn't turn out. Of course the WAC would. The WAC is Sun Belt West without the Broncos.

And now the same thing is happening to Boise State. The Mountain West has nothing against expanding to nine teams, but with the possibility of bigger and better schools falling like table scraps from BCS conference realignment, the MWC is content to sit back and see what comes their way. If nothing good happens, then they can just give Boise State a ring, and the Broncos will come running at a moment's notice.

It is no fun being the safety choice. I know because that's what I was for pretty much every Sadie Hawkins dance during high school.

The possibility for expansion is still very much out there for the Mountain West. According to Craig Thompson:

If the conference does decide to expand and if it decides to do so with Boise State, Thompson would be sure to get the invitation sent by July 1 - Boise State's decision deadline. In other words, enjoy three-and-a-half more weeks of speculation.

Craig Thompson breaks up with Bob Kustra over the phone

The MWC commish gave the Boise State president a ring, just to say what's up and oh yeah we're not inviting you to our conference because hold on I'm driving through a tunnel and ... /making static noise /hanging up

At least he didn't break up with him through a text message.

Where was this hesitancy when they started The .Mtn television network?

The Mountain West has gained a reputation over the years of being a maverick conference that is not afraid to take chances and be the first to try something new. They split off from the WAC to make their own way. They were the first to start their own conference-specific television network. They are known as risk-takers. So what gives?

Much of the discussion prior to the MWC meetings was based on the conference's reputation of forward-thinking and taking the offensive approach with the future. Can they really feel that secure that conference expansion is going to shake out in a way that will not leave them in the dust? Why become gun shy all of a sudden?

Let the spin cycle begin on Boise State saving face with a conference it sort of tolerates. From Coach Pete:

The WAC has, and will continue to be, a very strong platform to advance Bronco football.

No word on whether or not Coach Pete said that with a straight face.

And so I will count to ten and hope I feel a little better and the color leaves my face. But so help me if someone shows me a picture of Craig Thompson between now and then.

What do you think about how the Mountain West announcement came down? Frustrated? Angry? Hopeful? Disappointed? Share your thoughts in the comments.