What WAC rivalry will you miss most if Boise State goes to Mountain West?

Share All sharing options for: What WAC rivalry will you miss most if Boise State goes to Mountain West?

No more Fresno fans with Napoleon complexes, no more field trash at Aloha Stadium, no more Chris Ault big game failures? Say it ain't so. The possibility of a WAC-less Boise State carries with it some melancholy good-byes. Which one will be the hardest for you?

After the jump, take a look at my list of the WAC teams I will miss most if the Broncos make the Mountain West move, and let me know your thoughts in the comments.

Note: The Mountain West expansion rumorpalooza is still just rumor. But it's Friday, and I'm in the mood to speculate. Actual news on expansion is expected to come as early as Monday. I'll put my newsy hat on then. For now, it's presumptuous parachute pants.

There is no escaping the Idaho Vandals

Boise State will be beating up on the Vandals from now to forever, regardless of what happens during conference expansion. If the State Board of Education does not demand it, then there are tens of thousands of Idaho residents who will. Who cares about strength of schedule when there is a winning streak to top?

Since Idaho vs. Boise State will likely live on despite expansion, I have excluded the Vandals from my list of WAC good-byes.

The WAC teams I will miss the most 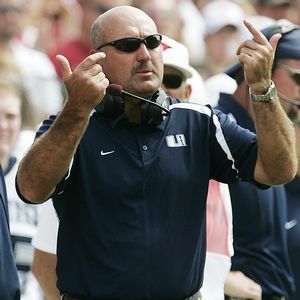 "Come here. I have some bad advice to give you." (via assets.espn.go.com)

If only Brent Guy had stuck around ... (and yes, that is the first time those words have ever been uttered). 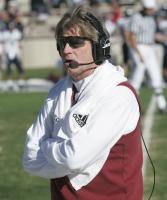 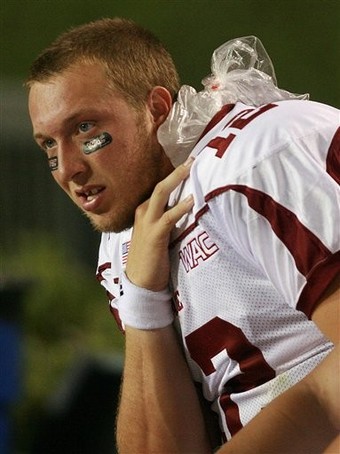 If Hal Mumme and Chase Holbrook found some loophole in the college rulebook that allowed for zany, unsuccessful coaches and hefty, overrated quarterbacks to remain at schools long past their being wanted or being eligible, I would probably miss New Mexico State more. As it is, the Aggies have nothing left that I am even remotely tied to. The only reason they beat out Utah State on my list was because of the 2008 game and because I have a pretty significant collection of Las Cruces jokes that I am not sure what to do with.

Going to Ruston is always an adventure for the Broncos, but for a lot of reasons, thank goodness that will be over. The lengthy travel makes a return to LaTech-land unlikely, which is sad. The fact that the Bulldogs never show up to play in Boise and have not had a good quarterback since Tim Rattay make them not all that attractive an opponent, which is why I put them here on my list. 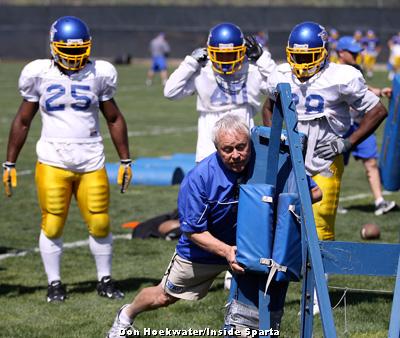 I will miss the 9:30 a.m. Saturday games and the inevitable story about how Boise State had better not overlook the Spartans because they Jared Zabransky's Boise State teams played them very close. That's about all I'll miss.

Surprised to see the Wolf Pack at No. 3 on my list? Me too. What a fool I am.

Here's my rationale: So much of my passionate distaste of Nevada lies on the Slim Jim legs and rubber-band-gun arm of Colin Kaepernick. Once he's gone, Nevada goes back to being moderately intolerable, and their biggest villain (if you'll pardon the oxymoron) goes back to being head coach Chris Ault.

Ault is enough to keep the Pack at No. 3 on this list, and the history between the two schools (as Native American vs. Manifest Destiny as it is) will be hard to let go. But I imagine that you'll see the Wolf Pack pop up on the Broncos' schedule every now and then.

For many years, part of Boise State's identity was tied to the Bulldogs thanks to constant upsets of Fresno and playing the role of underdog to FSU's favorite. Times have changed since then, but the Bulldogs are still regularly one of the WAC's best teams and one of Boise State's toughest conference games, typically depending on how late into the season we are. And speaking of tanking late in the season, I am going to miss Pat Hill quite a lot.

Fresno State is likely to land on the Broncos' schedule in some form if Mountain West expansion happens. And if the MWC should decide to go all the way to 12 teams at some point, it is likely that the Bulldogs (and possibly the Wolf Pack) would be invited. For that reason, saying good-bye to Fresno seems more like saying "See you later."

Games against Hawaii are always some of the most interesting for the Bronocos. There are huge blowouts with fair regularity. There are nailbiters that involve Orlando Scandrick returning blocked kicks for scores. There is the occasional loss to Colt Brennan that costs the Broncos a WAC championship but is totally worth it when Brennan and Co. flame out big-time in the Sugar Bowl.

Hawaii and Boise State have as much history as Fresno or Nevada. The reason I have the Warriors at No. 1 on my list: We might not see them ever again.

The Warriors pose a big travel burden and an increasingly poor level of competition. The cost of visiting the islands for a game is likely going to be too great for the Broncos to make it a habit. We might not see Hawaii again for a long while. And that makes me the saddest.

What WAC team will you miss most if Boise State winds up in the MWC? Think the Broncos will be able to schedule an additional WAC foe every year? Excited or bummed about the prospect of keeping the rivalry with the Vandals? Share your thoughts in the comments and in the poll.