Share All sharing options for: 100 Facts That Every Bronco Fan Should Know (Building A Better Fan Week)

From I-AA championships to Fiesta Bowl memories, Boise State has a storied history that everybody should know - especially Bronco fans.

Having reached unprecedented heights, the Broncos have attracted a massive fanbase, quite a few of whom had never heard of the team 10 years ago. So whether you have been a fan since Drisan pitched it to Jerard, or you can still remember Jim McMillan tearing it up, it's time to test your knowledge of Bronco history. Commit the following 100 facts to memory. And add your own in the comments.

OBNUG is proud to feature the work of reader BSU Guru as part of Building A Better Fan Week. Want to become a better Bronco fan? Well you're in luck. This week and next, OBNUG will be featuring a series of fan-related advice and coaching designed to make you a better fan and, therefore, a better person. You're welcome, society. 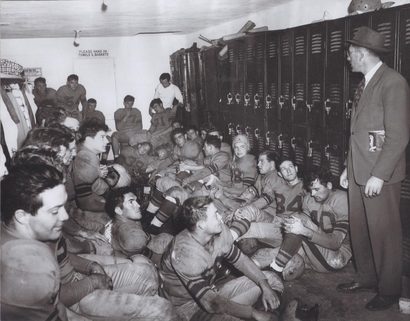 Benches are for sissies. (via cdn1.sbnation.com)

5. The field was officially named for Smith during halftime of a 1980 game against Nevada. 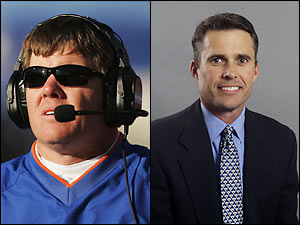 One's a two time Coach of the Year winner, the other is a loser...in a literal sense of course. (via i.a.cnn.net)

9. 1946 was Henry Jacoby's last year as coach and the last time the Broncos would have a losing record for the next 40 years (they finished 2-4-2 that season). But something good did happen in '46. Jacoby hired a young assistant named Lyle Smith who would succeed him as head coach the very next year.

11. Before the current Decade of Dominance, the Golden Era of Bronco Football had been the 1950s. Under coaches George Blankley and Lyle Smith, the Broncos went 85-10-2 (.876).

12. Tony Knap was hired in 1968 to lead Boise State into the Division II era. He had an incredible eight-year run going 71-19-1 (.780). Of course, they must have been way too successful for him, because he left for UNLV.

13. Tony Knap actually told the Boise media in 1975 that he wasn't going anywhere and then he took off for UNLV. Typical.

16. Skip Hall resigned in 1992 after the second losing season in 47 years. Have you noticed that after every losing season since Boise State became a four-year school, the coach leaves?

18. Tom Mason became the interim head coach after Pokey Allen took a leave of absence in 1996. He went 1-10 the rest of the year.

20. In four seasons at Colorado, Dan Hawkins has gone 16-33 for a .327 winning percentage while Coach Pete has become the first coach to ever win the Paul "Bear" Bryant Coach of the Year award twice.

22. The huge story line of next year's Ole Miss game: Houston Nutt taking on his former team. Let's see, one year, 5-6 record, and I doubt he knew half the player's names before taking off for Arkansas.

23. There have been 15 coaches in Boise State history. One-third of them have made Boise State their official pit stop on the road to coaching glory at bigger programs. 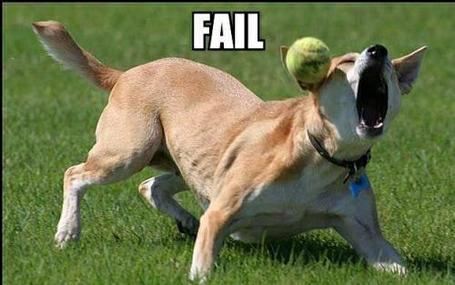 Look how bad these WAC teams are Facts

24.  The last time the Broncos lost a WAC game at home was - never. They are 36-0 all time against the WAC at Bronco Stadium.

26. Boise State has played Nevada 36 times making them the second most played opponent in Boise State history (the first being Idaho of course). The Broncos have a 24-12 record against them.

29. The Broncos have an incredible WAC record of 68-4.  When this season is over, Boise State will have spent exactly one decade in the WAC.

32. The Boise Junior College athletic program was suspended from 1942 to 1945 because of World War II.

33. The Broncos went 9-0 in both 1947 and 1948 but failed to receive a bowl invitation either season. Where have I heard that one before?

34. In 1949, after finishing three straight undefeated regular seasons, the Broncos were finally invited to a bowl game, the appropriately named Potato Bowl, which they won 25-7 against Taft Junior College. I don't know, does anyone else see symbolism in this?

35. In 1950, Boise Junior College was invited to compete in the Junior Rose Bowl, the grandnephew of them all, after an undefeated 9-0 season. This game was effectively the Junior College National Championship. Sadly, the Broncos were crushed 33-13 by Long Beach City College, ending an amazing 40-game winning streak.

38. Boise State College moved up to Division II in 1968 but did not join the Big Sky Conference until 1970.

39. The only jersey number Boise State has ever retired is Jim McMillan's number 12. McMillan was a three-year starter from 1972 to 1974, going 27-9 and winning two Big Sky titles.

40. The Broncos won five out of eight Big Sky titles during the latter half of the seventies. Also, they won three consecutive titles from 1973 through 1975.

43. The Broncos' last regular season loss was November 23, 2007, against the University of Hawaii. Think about that for a second, that was nearly three years ago.

46. The Broncos have only had five losing seasons since they became a four-year institution. 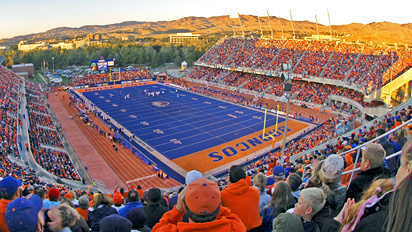 That's got to be the worst seat in the entire stadium. (via a.espncdn.com)

51. In 1986, newish athletic director Gene Bleymaier decided that if he was going to spend three quarters of a millions dollars buying new AstroTurf, he was going to flip the metaphorical bird at college football and make it blue. It was a decision that would define his career. It was either going to be marketing genius, or a marketing disaster.

52. Boise State's loss to Boston College in the MPC Computer's Bowl was technically not a home loss since the Broncos were considered the visiting team and wore their white uniforms. Bonus fact: That was the first and only time that Boise State wore white uniforms on the Blue.

53. The Bronco Stadium attendance record is 34,137 last year for the game against Oregon. My question is, if the official capacity is 33,500, where did the other 637 people sit?

55. The Broncos' closest home win of the decade was not against Nevada in 2007. It was a 28-27 victory against BYU in 2004. Boise State's home winning streak was kept intact because BYU kicker Matt Payne missed a 38-yard field goal wide right at the end of the game. 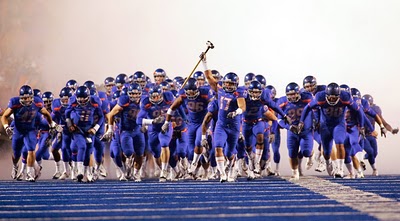 The Blue Thunder Marching...Team. (via 4.bp.blogspot.com)

56. Austin Pettis' 14 touchdown catches last season were a school record. Just think how many more he could have had if he had not been injured.

57. On June 11, 2010, Boise State accepted an invitation to join the Mountain West Conference, their third conference since becoming a Division 1A school.

61. People are always complaining that the Broncos always go undefeated. Well, fact of the matter is, the Broncos have gone undefeated only twice since they became a four-year institution and that was in 2006 and 2009.

64. The first time Boise State ever played Utah was September 6, 1980, in a 28-7 victory. Utah at that time was in Division I-A and in the WAC. The victory was a monumental upset. Boise State holds a 4-2 lead in the all-time series against Utah, and the Utes haven't beat the Broncos since October 31, 1987.

65. The Broncos once had a cornerback named DaWuan Miller who only had one arm. More amazing, he was a key defender on the 1994 national runner-up team, and he made several interceptions.

66. In 1985, UC Davis came to play the Broncos on the Green. Boise State won 13-9 in what should have been a rather insignificant game had it not been for a certain quarterback named Chris Petersen meeting the Broncos for the first time.

67. Boise State's most lopsided victory ever was on September 13, 1986, against Humboldt State in Bronco Stadium. It was a 74-0 victory. Humboldt has yet to play the Broncos again.

68. In 1994, coached by Pokey Allen, the Broncos reached their second Division 1-AA national title game. This time however, it didn't go as well. The Broncos lost to a Jim Tressel-coached Youngstown State team 28-14.

69. Boise State's mascot is a Bronco because all the students back then lived on farms and rode horses. The colors are blue and orange because those same students wanted something different than their rivals.

70. Out of all the schools Boise State has ever played, they have never beaten 15 of them. I'm sure you can name at least one.

71. On that same note, out of all the schools Boise State has ever played, they have never lost to 44 of them. I'm absolutely positive that you can name at least two of them.

72. Boise State is 17-6 all time against the current members of the Mountain West Conference. 13-4 if you take Utah out.

73. The Broncos have shut out their opponents 25 times. Although, there was not a single shutout in the 1990s. 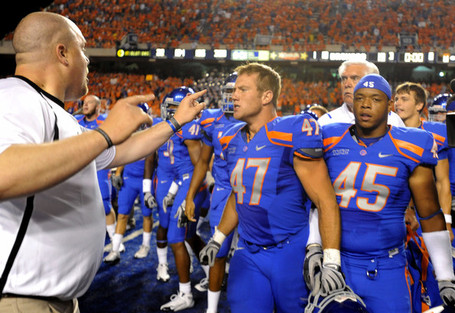 Know these facts but never repeat them Facts

75. In 1997, Boise State finished with a 5-6 record. It actually should have been 4-7 but for an ineligible player forced Cal St.-Northridge to forfeit a 63-23 beatdown of the Broncos, so that loss went in the history books as a win.

76. The worst season in Boise State history came courtesy of the 1996 team, the year the Broncos moved up to Division 1A and the year that Coach Pokey Allen died. They went 2-10, which is their only double-digit loss season ever.

77. During the latter half of the eighties and in the early nineties, the Boise State football team was stuck in mediocrity. From Jim Criner's departure in 1983 to Skip Hall's resignation in 1992, the Broncos went 66-48 (.579) with no championships of any kind.

78. The highest that Boise State has ever been in the polls is No. 4, which they were at multiple times last season. 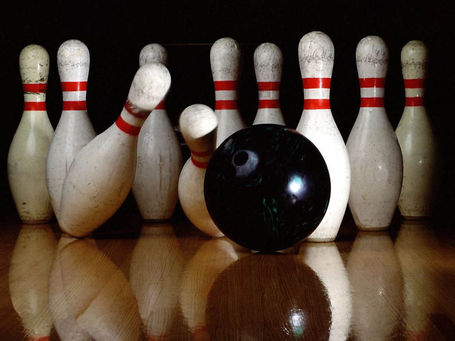 Bowling is one of the Broncos favorite sports. They actually used to be really good at it, but recently they haven't been doing so great. They always win the big ones though. (via www.ideachampions.com)

80. Boise State is 6-4 in Division 1A bowl games. They started out 4-0 but have since gone winless in bowls not named Fiesta.

81. The Fiesta Bowl against TCU was the first non-championship game ever to match two undefeated teams.

83. The Broncos won their first Division 1A bowl game against Louisville 34-31 in the 1999 Humanitarian Bowl. Just in time, too, because they were just hours from Y2K...Oh, wait, never mind.

84. The Fiesta Bowl against TCU was Boise State's 500th game since becoming a four-year college in 1968.

85. Boise State played a game against Oklahoma in 2007. I can't seem to remember what happened though.

All hail the 1980 national champions Facts

86. The Four Horseman backfield of Joe Aliotti, David Hughes, Cedric Minter, and Terry Zahner led Boise State to the 1980 Division 1-AA National Championship. They won the Big Sky conference that year with a 10-3 record and went on to defeat Eastern Kentucky 31-29 in the National Title Game.

87. Contrary to popular belief, Ian Johnson does not hold the school's career rushing record. That record still belongs to Cedric Minter and his 4,475 career rushing yards.

Hair plugs by Chia. (via cdn0.sbnation.com)

89. Jon Gott has his own Wikipedia page.

92. The first time Boise State played Idaho was in 1971. The game, unsurprisingly, was a 42-14 blowout victory in Boise. 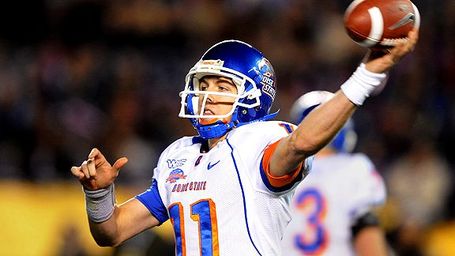 Mr. Moore is leading an all out assault on the Boise State record book. (via a.espncdn.com)

93. Jared Zabransky can throw a potato 80 yards. Anyone else think it's ironic that Zabransky grew up on a potato farm in Oregon?

94. In the 2000 Humanitarian Bowl, which was Bart Hendricks' last game, he passed for a touchdown, ran for two touchdowns, and caught a touchdown pass in a 38-23 win over UTEP.

96. Kellen Moore's 39-3 touchdown to interception ratio is an NCAA record. Did you notice though that each of the three interceptions came against three of the easiest teams on the schedule - Miami (OH), UC Davis, and Louisiana Tech.

97. Colt McCoy holds the record for most wins by a college quarterback with 45 - for now.

98. Jared Zabransky caught two passes in his career. One from Mark Onibokun for an eight yard gain and one from Jeff Carpenter for a negative three yard gain.

99. Kellen Moore was the first freshman to ever start a season as quarterback at Boise State. Now that Bronco coaches are seeing how well it worked, he probably won't be the last.

Boise State is the greatest team ever. There's no denying that. It's a fact.