Share All sharing options for: Strategy Session: You Make the Call (Building A Better Fan Week)

Though it may go unnoticed amid infographics and announcer chuckling, football is a game of massive strategizing and epic decision-making. And I'd like to help you get better at it.

After the jump, put on your thinking camps and decide what to do in six demanding football scenarios. Punt or go for it? Two points or one point? You make the call, I state the case, and we all learn a little more about proper football strategy. Let's begin.

This feature is part of OBNUG's Building A Better Fan Week. Want to become a better Bronco fan? Well you're in luck. This week and next, OBNUG will be featuring a series of fan-related advice and coaching designed to make you a better fan and, therefore, a better person. You're welcome, society.

The situation: Your team is ahead by six points with 2:08 remaining in the game. You have the ball on your own 28-yard-line, facing a 4th and 2. The other team has one timeout and has moved the ball efficiently on offense throughout the second half. You are obviously not playing New Mexico State.

The situation: Early in the first half, your team faces a 4th and Goal at your opponent's 2-yard-line.

No. 3: The two-point conversion

The situation: Ahead by two points with 7:48 remaining in the fourth quarter, your team scores a touchdown to push the margin to eight. Mark May is not impressed; you should be destroying this team.

No. 4: The two-point conversion, take two

The situation: Your team has just scored a touchdown to cut your deficit to five points just before halftime.

The situation: Early in the first quarter, your team lines up for a 44-yard field goal attempt on 4th and 4 from your opponent's 27 yard line. The kick is good, but the other team is flagged for offsides. They are so gullible!

The situation: Trailing by seven points with 34 seconds remaining in the fourth quarter, your team needs to go 66 yards for the tying or go-ahead score. You have two timeouts left. Your first play from scrimmage is a 50-yard pass to your opponent's 16-yard-line. Your receiver stays in bounds. The clock stops temporarily at 18 seconds while the first down chains are moved and the referee announces a declined pass interference penalty. Your team's next play is an incomplete pass over the middle. There are 8 seconds left.

The decision: In the above sequence, how do you manage the clock? Do you ... 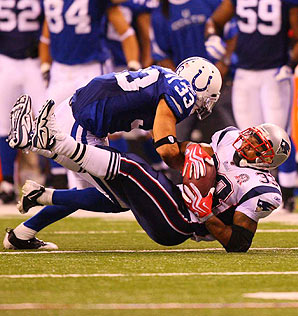 "Kevan Lee is not going to be very happy with me." (via i2.cdn.turner.com)

Good luck finding a consensus correct answer on this one.

Many of you may recognize this scenario as the one that drew the media's ADD attention span last NFL season when the New England Patriots made this call against the Indianapolis Colts on Sunday Night Football. The decision did not work out, but did that make it the wrong call?

Smart football people said no. Peter King said yes. The smart ones pulled out their graphing calculators and computed the odds and evidence in Belichick's favor. Peter King pulled out a frappuchino and told a story about the Mannings. The difference between the two camps was remarkable: One side favored the odds, the other side favored tradition. Which one was right?

Technically, the statisticians were correct, making answer B the right call. Let's forget for a moment that the percentages in this scenario favor the bold (4th and 2s get converted 60 percent of the time). The heart of the argument lies in this passage from the smart people linked above:

The goal is, obviously, to maximize your chance of winning. If you punt, your chances of winning are your odds of stopping a streaking Manning who has just torched your defense the whole fourth quarter. He will have to drive about 70 yards ...

If you go for it, your chance of winning hinges on two outcomes: (a) if you get the first down, you win the game; and (b) if you don’t get it, you still have a chance to stop Manning ...

Essentially, you may end up hoping for the best from your defense either way. Why not give yourself a fighting chance on offense first?

First, the statisticians. ESPN wrote a piece awhile back on why teams should go for it more on fourth down. Allow me to copy and paste liberally:

Romer concluded that coaches punt or kick field goals on fourth down far too often. For example, when facing fourth and goal inside the opponent's 3-yard line early in the game, a coach nearly always opts for the field goal. (In Romer's sample, teams kicked 38 of 47 times.) The team gets three points, fans cheer politely and announcers agree that the coach made a sound decision.

The coaches' take is also valuable. Taking sure points is never a bad idea, no matter where you are on the field. A 100 percent chance at three points will almost always outweigh a 43 percent chance at six points, even if the math makes the choice seem equal.

It really comes down to a matter of aggression versus safety. Taking the sure points is the safe way to go. Trying for a touchdown is bold. Add in the fact that the bold decision is the only one that will get second-guessed afterward, and it is easy to see why most coaches go that route. 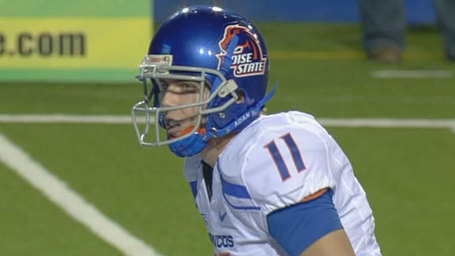 "I'm going to throw this one with my left hand to impress Joe Tessitore." (via assets.espn.go.com)

No. 3: The two-point conversion

The correct answer is A: Kick the extra point to go up nine. With an eight-point lead, it is still a one-score game. Rather than run the risk of failing on a two-point try (success rates are 40 to 50 percent), take the sure thing XP and go up by two scores.

This, of course, was not the decision that Coach Pete made against Louisiana Tech last season. Coach Pete went for two, and while the conversion ended up being good, the decision was not necessarily a sound one.

For this reason, most coaches carry around a two-point conversion chart, detailing when to try for the conversion based on virtually any conceivable score margin. Up 11? Go for two. Down by nine? Kick the extra point. In fact, the chart is so handy that I got you all one. Enjoy. 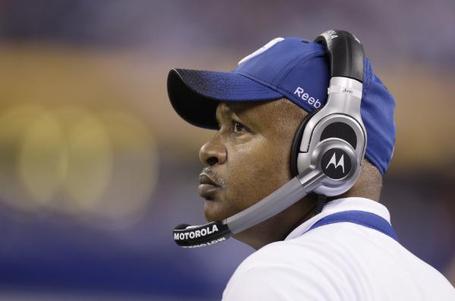 What Would Tony Dungy Do? (via www.sportsfanlive.com)

No. 4: The two-point conversion, take two

The correct answer is either A or B.

Is this a cop out? Yes, probably. But the truth of the matter in this scenario is that the right answer comes down to whether or not you believe two-point conversions should be tried before the fourth quarter.

Indianapolis coach Jim Caldwell certainly does not think so. In the AFC championship game, he faced this exact scenario, and he chose the extra point without even giving it a second chance. Some coaches are always into going for two (Coach Pete would fall into this camp). Others think it best to wait until the fourth quarter.

Which side are you on?

I take the fourth quarter stance for this reason: You never know what kind of score you'll be chasing later. Say, for instance, that the above scenario happens, and you go for two and miss. At the start of the second half, the other team kicks a field goal and you are down eight - still a one score game but with hardly a guarantee that you'll make your two-point conversion. If you kick the extra point and the other team gets a field goal, it is a seven-point game, and you're in good shape.

Point is, there is so much of the game left to be played and so many scoring variables that you are better off taking the sure point and going bold once you are more sure what you'll need.

The correct answer is A: Keep the points.

Never take points off the board. This is law.

The correct answer is A: Take your timeout after the initial play. I would have also accepted C and maybe D, but definitely not B.

B is what Robb Akey did in the Humanitarian Bowl - the game that will forever be remembered as one of Akey's finest moments. Oh, history, how little you know about proper clock management.

Instead of stopping the clock with 18 seconds left, the Vandals let the clock run, ran a horribly ill-conceived play that resulted in an incomplete pass one yard from the line of scrimmage in the middle of the field, and burned a timeout just for kicks. That is not good coaching. That is poor guessing.

You take your timeout after the initial play for obvious reasons: The clock is running. Time is valuable. Nathan Enderle is your quarterback and cannot be trusted to make quick decisions on his own. A blunder like this could have cost the Vandals the game, and instead of sweet interview time with Heather Cox, Akey would have had Brian Murphy grilling him in the press room. No one wants that.

The one answer that could spurn some pretty good debate is whether or not Enderle should have spiked the ball after the long pass play. Ask some people, and they will tell you that spiking the ball is never okay. To wit (emphasis added):

When you watch any of these late game offenses, the announcers love to tell you "now it's time for the offense to go up there and spike it," or "they should spike it -- the offense is wasting time!" It's amazing how little thought has been put into such a crucial decision. There are two responses: (1) when you spike the ball, you have no idea how valuable the down you are losing might be, and (2) although it's true for some teams that spiking the ball might take less time than just lining up and calling a play at the line, there is no reason that that should be the case.

I wholeheartedly agree with the final statement that a well-coached team should not need to spike the ball because they can execute a successful play in the same amount of time. Of course, the Vandals are not a well-coached team, so I guess the point is moot.

How did you do with these scenarios? Anything you agree or disagree with? Think you could do a better job coaching than Robb Akey? Share your thoughts in the comments.